Long tails of material that are the result of gravitational interactions between galaxies. During the interaction, gas and stars are stripped from the outer regions of the galaxies to form two tidal tails: one trailing and one preceding each galaxyConcentration of 106 to 1012 stars, dust and gas, that are gravitationally bound. Our galaxy contains ~2 × 1011 stars. There are four main types of galaxies: • Elliptical
• Lenticular
• Spiral
• Irregular
. These tails may persist long after the galaxies have merged and are a signature of recent merger activity. Perhaps most famous tidal tails are those of the Antennae (NGC4038/4039), which are ~350,000 light years long. The central regions of the merging galaxies have hundreds of starSelf-luminous object held together by its own self-gravity. Often refers to those objects which generate energy from nuclear reactions occurring at their cores, but may also be applied to stellar remnants such as neutron stars. forming knots similar in size to globular clusters (some are as large as dwarf galaxies). Tidal tails will persist for several billion years after the galactic merger. 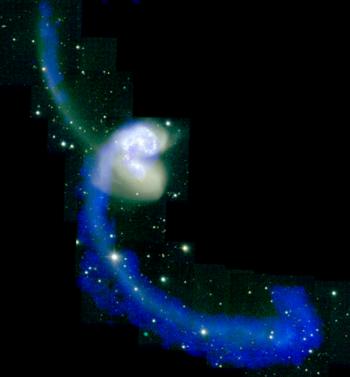 The motions of tidal tails can be used as powerful probes of the shape of dark matterForm of matter that does not emit light, absorb light, or otherwise interact with electromagnetic radiation. Its only interactions are gravitational and dark matter particles can clump under the force of gravity (unlike "dark energy" which is evenly distributed throughout space). The existence of dark matter has been inferred from halos within galaxies. For example, the tidal stream from the Sagittarius Dwarf GalaxyRelatively small galaxy, typically containing ~107 stars. There is no official size below which a galaxy is designated a dwarf but any galaxy with a diameter below 30,000 light years can be considered a dwarf. The Large and Small Magellanic Clouds, visible in the Southern Hemisphere at a distance of has been used to show that the dark halo of the Milky Way is close to spherical.