Type of non-thermal radiation generated by charged particles (usually electrons) spiraling around magnetic field lines at close to the speed of lightSpeed at which electromagnetic radiation propagates in a vacuum. Although referred to as the speed of light, this should be more properly called the 'speed of a massless particle’ as it is the speed at which all particles of zero mass (not only photons, but gravitons and massless neutrinos if. The electrons are always changing direction and are, in effect, accelerating and emitting photons with frequencies determined by the speed of the electron at that instant. The resulting radiation is confined to a narrow cone that points in the direction of the motion of the particle, in a process called beaming. It is also polarized in the plane perpendicular to the magnetic field. The degree and orientation of the polarization provide information about the magnetic field of the source. 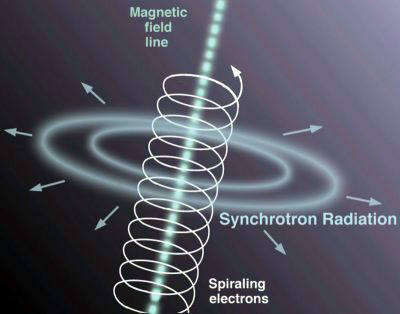 The spectrum of synchrotron emission results from summing the emission spectra of individual electrons. As a electron spirals around the magnetic field, it emits radiation over a range of frequencies peaking at a critical frequency,v0. The longer the electron spins around the magnetic field, the more energy it loses, the wider the spiral it makes, and the longer the wavelengthDistance from one peak of a wave to the next. Wavelength is measured in units of distance. The wavelengths of visible light correspond to ~400-650 nm. Wavelength is an important way to characterize a wave. For light, the shorter the wavelength, the higher the energy of the light wave. of the critical frequency. Synchrotron emission has a characteristic spectrum, where the flux steadily declines with frequency according to the relation:

Where, α, known as the spectral index for the object, has an observed range between -3 and +2.5 (which is also the theoretical upper limit). Although particularly important to radio astronomers, depending on electron energy and the strength of the magnetic field, synchrotron emission can also occur at visible, ultraviolet and X-ray wavelengths.