Smaller of the two irregular galaxies that make up the Magellanic Clouds. These two galaxies orbitThe elliptical path of one body around another, typically the path of a small body around a much larger body. However, depending on the mass distribution of the objects, they may rotate around an empty spot in space • The Moon orbits around the Earth. • The Earth orbits around the Milky Way once every 1,500 million years, and each other once every 900 million years. Located 200,000 light years away, the SMC has a mass of ~3 billion Msun. Some observations suggest that it might be a barred disk galaxyConcentration of 106 to 1012 stars, dust and gas, that are gravitationally bound. Our galaxy contains ~2 × 1011 stars. There are four main types of galaxies: • Elliptical
• Lenticular
• Spiral
• Irregular
, deformed by gravitational interactions with the Milky Way and the Large Magellanic Cloud (LMC). The Magellanic Stream, a tail of gas that has been stripped from the SMC/LMC systemDefinable part of the universe that can be open, closed, or isolated. An open system exchanges both matter and energy with its surroundings. A closed system can only exchange energy with its surroundings; it has walls through which heat can pass. An isolated system cannot exchange energy or matter with, provides further evidence for interactions between these three galaxies. 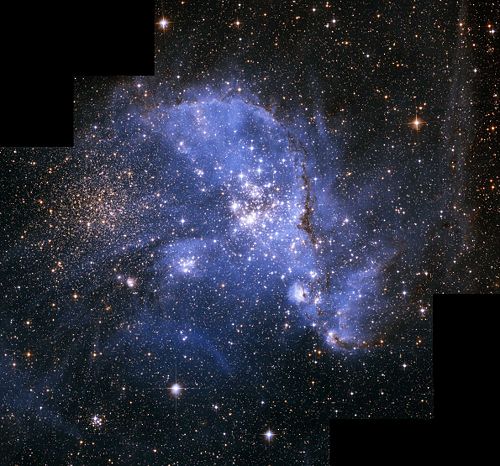