Smallest impact features, consisting of a bowl-shaped interior with smooth walls, an elevated rim, and a
shallow inclinationAngle between the plane of an object's orbit and the ecliptic; the inclination of a moon's orbit is the angle between the plane of its orbit and the plane of its primary's equator. hummocky exterior. The interior wall is usually inclined at 20-40° to horizontal, whereas the exterior wall is inclined at 5-15° to horizontal. At larger diameters, simple craters become more complex with transitional forms developing in the 15-25 km diameter range on the Moon, 4-10 km range on Mars and 2-6 km range on Earth. Transitional craters have landslides
on the interior wall and a hummocky floor. The photograph shows Moltke on the Moon, a typical simple craterBowl-like depression ("crater" means "cup" in Latin) on the surface of a planet, moon, or asteroid. Craters range in size from a few centimeters to over 1,000 km across, and are mostly caused by impact or by volcanic activity, though some are due to cryovolcanism.. The crater diameter (measured across the top of the rim) is 6.5 km and the crater depth (measured from the top of the rim to the centre of the floor) is 1.3 km. 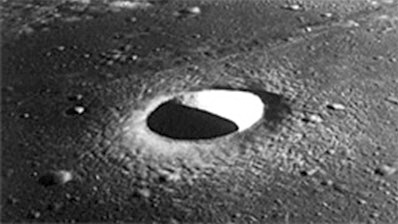