Nomenclature for characteristic x-raysHigh-energy electromagnetic radiation, with short wavelength (~10-0.01 nm) and high frequency (greater than ~1016 Hertz). Although the boundaries are somewhat arbitrary, wavelengths shorter than 0.01 nm are called gamma-rays and those longer than 10 nm extreme ultraviolet (EUV). X-rays would be produced by blackbody radiation at temperatures in excess of introduced by Manne Siegbahn in 1923. This systemDefinable part of the universe that can be open, closed, or isolated. An open system exchanges both matter and energy with its surroundings. A closed system can only exchange energy with its surroundings; it has walls through which heat can pass. An isolated system cannot exchange energy or matter with is based on relative intensity of lines from different series. Characteristic X-rays named according to the shell being filled (K, L, M …) and the number of shells changed by electron (α = 1 shell, β = 2 shells, γ = 3 shells, etc.). Because this spectrographic nomenclature was developed before the electronic structure of atoms was well-understood, there are inconsistencies. These inconsistencies were eliminated in the IUPAC (International Union of Pure and Applied Chemistry) notation. 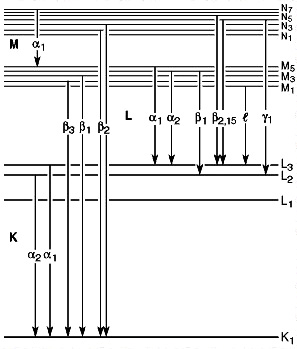