MeteoriteWork in progress. A solid natural object reaching a planet’s surface from interplanetary space. Solid portion of a meteoroid that survives its fall to Earth, or some other body. Meteorites are classified as stony meteorites, iron meteorites, and stony-iron meteorites. These groups are further divided according to their mineralogy and so small that it falls to Earth essentially unchanged from how it existed in space. If a meteoroidSmall rocky or metallic object in orbit around the Sun (or another star). entering the Earth’s atmosphere is sufficiently small (generally less than 10-6 m), it will be slowed by collisions with molecules in the upper atmosphere to a degree where ablationGradual removal of the successive surface layers of a material through various processes. • The gradual removal and loss of meteoritic material by heating and vaporization as the meteoroid experiences frictional melting during its passage through the atmosphere. The resulting plasma ablates the meteor and, in cases where a meteor does not occur. Micrometeorites constitute almost all of the interplanetary debris entering the Earth’s atmosphere every day. They are commonly found in places where the terrestrial dust content is low, such as ocean floor sediments, Antarctic ice and in the stratosphere. 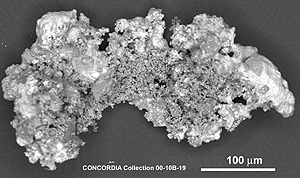