The light phenomena produced by particles (meteoroids) traveling through a planet’s atmosphere and heating the surrounding air.   MeteorHow long Sonic booms Of the several 10s of tons of cosmic material entering Earth's atmosphere each day, only about one ton reaches the surface. An object's chance of survival depends on its initial mass, speed and angle of entry, and friability (tendency to break up). Micrometeoroids radiate heat so showers occur at particular times of year when the Earth intersects  debris traveling along the orbitThe elliptical path of one body around another, typically the path of a small body around a much larger body. However, depending on the mass distribution of the objects, they may rotate around an empty spot in space • The Moon orbits around the Earth. • The Earth orbits around of a cometConglomeration of frozen water and gases (methane, ammonia, CO2) and silicates that that formed in the outer solar system and orbits the Sun. In recent years, the description of comets has shifted from dirty snowballs to snowy dirtballs with more dust than ice. However, the ratio is less than 10-to-1..

Light phenomenon that occurs when the orbit of the Earth passes through a meteor streamRelatively narrow band of meteoroids stretched out along the orbital path of a comet. It consists of dust released from the nucleus of a comet during its perihelion passage. The dust grains escape the weak gravity of the nucleus and travel on their own independent, heliocentric orbits. Although these orbits. For example, the Earth’s orbit intersects the orbit of the comet Tempel-Tuttle every November, producing the Leonid meteor shower. All the meteoroids in the stream basically travel parallel to each other and when they hit Earth’s atmosphere appear to originate from a single point (the radiantPoint on the celestial sphere from which meteors of a given shower appear to radiate. The effect is due to perspective.). The meteors appear to come from a specific constellation (the constellation Leo in the case of Tempel-Tuttle). 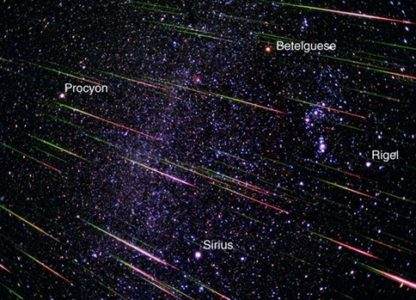 The duration of a shower depends on how long it takes for Earth to pass through the meteor stream. It is measured by calculating the number of meteors that a single visual observer would see in an hour assuming a limiting magnitude of 6.5 and the radiant at the zenithPoint directly overhead, as determined by the indefinite upward extension of a plumb line.. This is known as the zenithal hourly rate (ZHR) and is a measure of the concentration of material in the stream. The ZHR changes from year to year as the meteor stream constantly evolves. For example, if the comet has recently visited the inner Solar SystemThe Sun and set of objects orbiting around it including planets and their moons and rings, asteroids, comets, and meteoroids., there generally will be more meteoroids in the stream and a higher ZHR results. Extremely active showers with ZHR >1000 are usually called ‘meteor storms’.