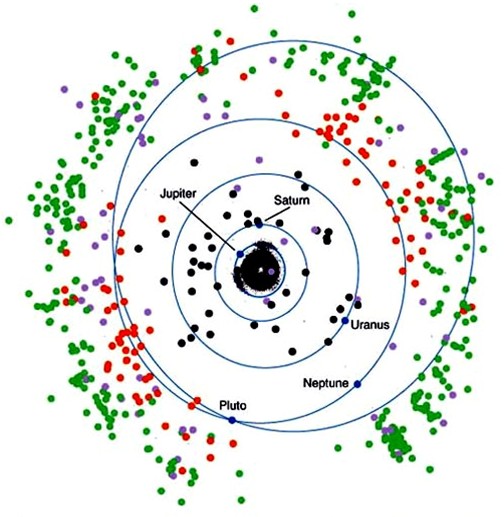 Region in the outer solar systemThe Sun and set of objects orbiting around it including planets and their moons and rings, asteroids, comets, and meteoroids. beyond Neptune’s orbitThe elliptical path of one body around another, typically the path of a small body around a much larger body. However, depending on the mass distribution of the objects, they may rotate around an empty spot in space • The Moon orbits around the Earth. • The Earth orbits around that contains billions of small, icy planetesimalsHypothetical solid celestial body that accumulated during the last stages of accretion. These bodies, from ~1-100 km in size, formed in the early solar system by accretion of dust (rock) and ice (if present) in the central plane of the solar nebula. Most planetesimals accreted to planets, but many – from the original protoplanetary discFlattened and rotating disk of dense gas and dust/solids orbiting a young star from which planets can eventually form.   that failed to coalesce into planets. The Kuiper Belt extends from Neptune’s orbit at 30 AUThe astronomical unit for length is described as the "mean" distance (average of aphelion and perihelion distances) between the Earth and the Sun. Though most references state the value for 1 AU to be approximately 150 million kilometers, the currently accepted precise value for the AU is 149,597,870.66 km. The to ~55 AU. It is ~20x wider and 20-200x more massive than the asteroid beltBelt located between 2.12 and 3.3 AU from the Sun and located between the orbits of Mars and Jupiter containing the vast majority of asteroids. The asteroid belt is also termed the main asteroid belt or main belt to distinguish it from other asteroid populations in the Solar System such and contains three categories of bodies: classical KBOs, scattered KBOs (KBOs thrown into long elliptical orbits by Neptune), and resonant KBOs (in a 3:2 resonance relationship with Neptune including Pluto and sometimes called ‘plutinos’). The Kuiper belt is sometimes considered part of the Oort CloudVast spherical swarm ~1012-1013 long-period comets orbiting the Solar System with semimajor axes between 1,000 and 50,000 AU, typically with low orbital eccentricity. The Oort cloud, while roughly spherical at the largest radius, is wedge-shaped where it merges with the outer planet region in the vicinity of the Kuiper belt. It is occasionally referred to as the Edgeworth-Kuiper beltA group of comets residing mainly near the ecliptic at distances of 34-45 AU from the Sun..