X-ray emitted from an excited atom when an outer-shell (e.g. L) electron jumps in to fill an inner-shell (e.g. K) vacancyUnoccupied sites within a crystal that are usually occupied by an atom. A vacancy may move when a neighboring atom or ion moves to occupy the vacant site (the vacancy shift in the opposite direction to the site that was the source of the atom). The surrounding bonded crystal structure. It has energy characteristic of the atom and can therefore be used for analytical purposes. Its energy is the difference between the energies of the atom with an inner-shell vacancy and the same atom with an outer-shell vacancy. The emission of the excess energy when an atom de-excites (decays or relaxes) can alternatively be achieved by the production of an Auger electron. The transitions that produce characteristic x-raysHigh-energy electromagnetic radiation, with short wavelength (~10-0.01 nm) and high frequency (greater than ~1016 Hertz). Although the boundaries are somewhat arbitrary, wavelengths shorter than 0.01 nm are called gamma-rays and those longer than 10 nm extreme ultraviolet (EUV). X-rays would be produced by blackbody radiation at temperatures in excess of from barium are shown below. 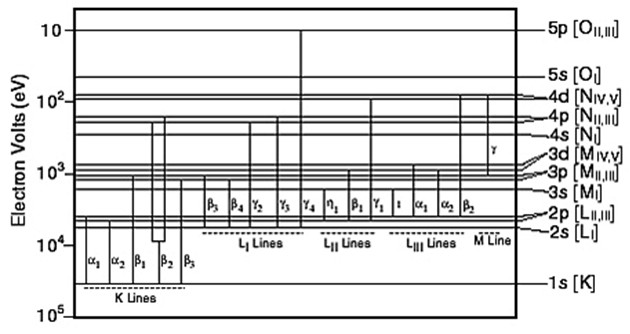