Rate of decrease of temperature with increasing altitude in the atmosphere. If heat is neither gained nor lost from the air parcel under consideration, then the lapse rate is said to be adiabaticProcess in which no heat enters or leaves a system. This is the case, for example, when an interstellar gas cloud expands or contracts. Adiabatic changes are usually accompanied by changes in temperature or volume.. The lapse rate is:

where, γ = lapse rate is given in units of temperature divided by units of altitude, T = temperature, and z = altitude, and points 1 and 2 are measurements at two different altitudes.

A rising parcel of unsaturated air loses temperature at the dry adiabatic lapse rate (DALR), which is a 9.78 °C/km (3 °C/1000 ft, or 5.37 °F/1000 ft) on Earth. The moist adiabatic lapse rate (MALR), also called the saturated adiabatic lapse rate (SALR) varies with temperature and pressure, but is usually near 4.9 °C/km (2.7 °F/1000 ft or 1.51°C/1000 ft). The reason for the difference between it and the DALR is that latent heatHeat absorbed or released as the result of a phase change. There are three basic types of latent heat each associated with a different pair of phases: fusion (solid-liquid), vaporization (liquid-gas), and sublimation (solid-gas). No temperature change occurs during a phase change, thus there is no change in the kinetic is released when water cools and condenses. The actual lapse rate varies with elevation. Atmosphere with an actual lapse rate greater than the DALR is unstable; with a rate lower than the DALR, it is stable. 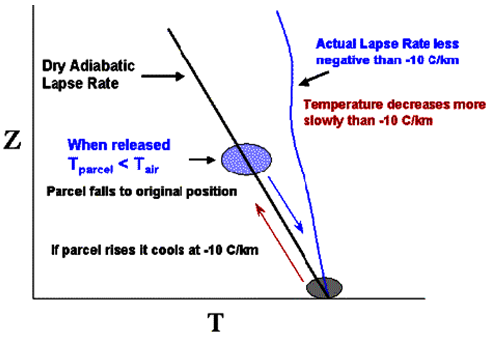