Narrow range of wavelengths in a spectrum that are darker (have lower intensity) than neighboring wavelengths. 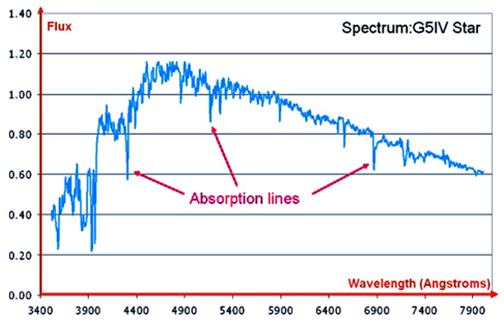 AbsorptionTransfer of energy to a medium as a particle or electromagnetic radiation passes through it. Absorption of electromagnetic radiation is the combined result of Compton scattering, σ, and photoelectric absorption, τ. It may be quantified: where, t = thickness, ρ = density, and μ = mass absorption coefficient, which combines Compton and photoelectric effects (μ = σ + τ). lines in the spectrum of a G5IV starSelf-luminous object held together by its own self-gravity. Often refers to those objects which generate energy from nuclear reactions occurring at their cores, but may also be applied to stellar remnants such as neutron stars.. Image source: http://astronomy.swin.edu.au/cms/imagedb/albums/userpics/starspectrum.jpg.