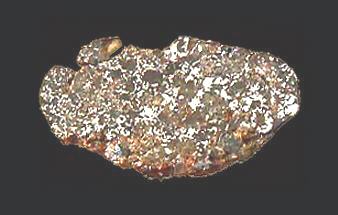 MesosideriteOne of two main types of stony-iron meteorite, the other being pallasites. Mesosiderites are a mixture of approximately 50% basaltic, gabbroic and orthopyroxenitic silicates and 50% Ni-Fe metal and sulfides. The name derives from the Greek "mesos" meaning "middle" or "half" and "sideros" for "iron;" hence "half-iron". The silicates are, subgroup 2C (subgroup 2B in Metbull 88)
Found 2002, no coordinates recorded

A very small fusion-crusted stone weighing only 13.52 g was purchased in Erfoud, Morocco by M. Farmer in March 2003. Analysis and classification was completed at Northern Arizona University. Although the MetBull #88 lists NWA 1912 as belonging to subgroup 2B, it exhibits only minor recrystallization and has a matrixFine grained primary and silicate-rich material in chondrites that surrounds chondrules, refractory inclusions (like CAIs), breccia clasts and other constituents. composed predominantly of large orthopyroxeneOrthorhombic, low-Ca pyroxene common in chondrites. Its compositional range runs from all Mg-rich enstatite, MgSiO3 to Fe-rich ferrosilite, FeSiO3. These end-members form an almost complete solid solution where Mg2+ substitutes for Fe2+ up to about 90 mol. % and Ca substitutes no more than ~5 mol. % (higher Ca2+ contents occur grains along with some plagioclaseAlso referred to as the plagioclase feldspar series. Plagioclase is a common rock-forming series of feldspar minerals containing a continuous solid solution of calcium and sodium: (Na1-x,Cax)(Alx+1,Si1-x)Si2O8 where x = 0 to 1. The Ca-rich end-member is called anorthite (pure anorthite has formula: CaAl2Si2O8) and the Na-rich end-member is albite, features that are consistent with assignment to subgroup 2C. Furthermore, it is considered likely that NWA 1912 is a member of the NWA 1827 pairing group, assigned to subgroup 2C (Bunch et al., 2004).

Northwest Africa 1912 is an unshocked meteoriteWork in progress. A solid natural object reaching a planet’s surface from interplanetary space. Solid portion of a meteoroid that survives its fall to Earth, or some other body. Meteorites are classified as stony meteorites, iron meteorites, and stony-iron meteorites. These groups are further divided according to their mineralogy and (S1) that shows only minor signs of weathering. The specimen in the photo above is a 0.64 g partial slice, which exhibits green orthopyroxene fragments in a metallic matrix, along with lesser amounts of anorthitic plagioclase, chromiteBrownish-black oxide of chromium and iron (Cr-Fe oxide), Cr2FeO4, found in many meteorite groups., troiliteBrass colored non-magnetic mineral of iron sulfide, FeS, found in a variety of meteorites., and silicaSilicon dioxide, SiO2..