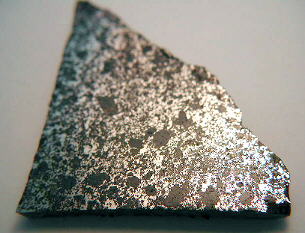 Found 1985
no coordinates recorded Two fragments with a combined weight of ~7 kg were found near the village of Gillio, Libya by an oil worker. The masses were utilized as bookends until they were purchased from the worker’s daughter by meteoriteWork in progress. A solid natural object reaching a planet’s surface from interplanetary space. Solid portion of a meteoroid that survives its fall to Earth, or some other body. Meteorites are classified as stony meteorites, iron meteorites, and stony-iron meteorites. These groups are further divided according to their mineralogy and dealer A. Lang in 1998. A sample was submitted to Rutgers University (Roger Hewins) for analysis and classification, and the name Sahara 85001 chosen to be most appropriate given the lack of an exact findMeteorite not seen to fall, but recovered at some later date. For example, many finds from Antarctica fell 10,000 to 700,000 years ago. location. However, results were not forthcoming, and four years later, an additional sample was submitted to Northern Arizona University (Ted Bunch). By this time in 2002, the NWA-series had been established by the Meteorite Nomenclature Committee of the Meteoritical Society and the name NWA 1242 was assigned to this mesosiderite; however, since it is a find location in Libya, this meteorite was included within the NWA-series. In the interim a couple of kilos of this meteorite was sold under the name Sahara 85001, and this name is now a synonym for the official name NWA 1242. Northwest Africa 1242 was classified at Northern Arizona University as a member of the small 2A metamorphicRocks that have recrystallized in a solid state due to changes in temperature, pressure, and chemical environment. subgroup. (see the Bondoc page for further information about the Floran (1978) and Hewins (1984) classification schemes).

Northwest Africa 1242 contains scattered, cm-sized, metalElement that readily forms cations and has metallic bonds; sometimes said to be similar to a cation in a cloud of electrons. The metals are one of the three groups of elements as distinguished by their ionization and bonding properties, along with the metalloids and nonmetals. A diagonal line drawn nodules (see photo below), together with lithic clasts consisting of Ca-rich pyroxeneA class of silicate (SiO3) minerals that form a solid solution between iron and magnesium and can contain up to 50% calcium. Pyroxenes are important rock forming minerals and critical to understanding igneous processes. For more detailed information, please read the Pyroxene Group article found in the Meteoritics & Classification category., anorthitic plagioclaseAlso referred to as the plagioclase feldspar series. Plagioclase is a common rock-forming series of feldspar minerals containing a continuous solid solution of calcium and sodium: (Na1-x,Cax)(Alx+1,Si1-x)Si2O8 where x = 0 to 1. The Ca-rich end-member is called anorthite (pure anorthite has formula: CaAl2Si2O8) and the Na-rich end-member is albite, pyrrhotiteIron sulfide group of minerals whose composition ranges widely between its end members pyrrhotite (Fe7S8) whose crystal structure is monoclinic, and troilite (FeS) whose crystal structure is hexagonal. Its general formula is Fe1−xS (where x = 0 to 0.17). The troilite phase is found mainly in meteorites and in the, chromiteBrownish-black oxide of chromium and iron (Cr-Fe oxide), Cr2FeO4, found in many meteorite groups., and FeNi-metal. This unweathered mesosiderite (W0) is shocked to stage S1. The specimen shown above is an 11.67 g partial slice. The top photo below is a close-up image of a large, etched metal nodule, while the bottom photo shows the main massLargest fragment of a meteorite, typically at the time of recovery. Meteorites are commonly cut, sliced or sometimes broken thus reducing the size of the main mass and the resulting largest specimen is called the "largest known mass". of NWA 1242. 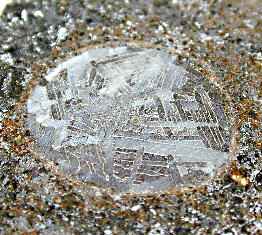 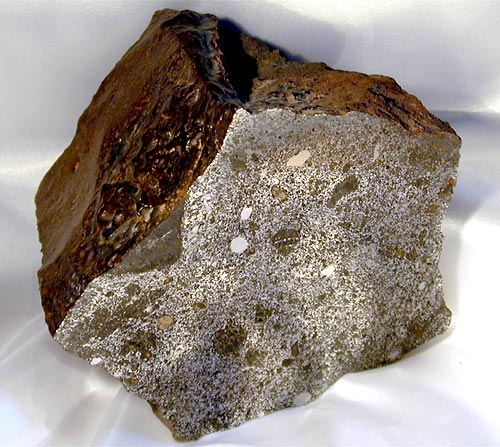