Lunar Feldspathic BrecciaWork in Progress ... A rock that is a mechanical mixture of different minerals and/or rock fragments (clasts). A breccia may also be distinguished by the origin of its clasts: (monomict breccia: monogenetic or monolithologic, and polymict breccia: polygenetic or polylithologic). The proportions of these fragments within the unbrecciated material
(regolithMixture of unconsolidated rocky fragments, soil, dust and other fine granular particles blanketing the surface of a body lacking an atmosphere. Regolith is the product of "gardening" by repeated meteorite impacts, and thermal processes (such as repeated heating and cooling cycles).   breccia)

Found March 23, 1997
27° 11.02′ N., 16° 18.02′ E. A 513 g stone was found in the Sahara by one of the pioneers of hot desert meteoriteWork in progress. A solid natural object reaching a planet’s surface from interplanetary space. Solid portion of a meteoroid that survives its fall to Earth, or some other body. Meteorites are classified as stony meteorites, iron meteorites, and stony-iron meteorites. These groups are further divided according to their mineralogy and hunting, Rainhard Welz. This polymict anorthositic highlands breccia is the first lunar meteorite recovered from the Northern hemisphere. It consists mostly of light-colored clasts, mainly anorthositic lithologies high in Al and Ca, and feldspathic crystalline impact-melt breccias, along with glass fragments and rare melt spherules, embedded in a fine-grained, very coherent matrixFine grained primary and silicate-rich material in chondrites that surrounds chondrules, refractory inclusions (like CAIs), breccia clasts and other constituents.. It has a shock stageA petrographic assessment, using features observed in minerals grains, of the degree to which a meteorite has undergone shock metamorphism. The highest stage observed in 25% of the indicator grains is used to determine the stage. Also called "shock level".               of S3 (15–20 GPa), and contains abundant impact melt veins throughout. FeNi-metal particles are found associated with the veins and matrix, with ilmeniteTi-Fe oxide, TiFeO3, found in achondrites, lunar mare basalts, and shergottites. Ilmenite forms as a primary mineral in mafic igneous rocks. It crystallizes relatively early out of a magma before most of the other minerals, and as a result, the heavier crystals of ilmenite precipitate to the bottom of the magma, troiliteBrass colored non-magnetic mineral of iron sulfide, FeS, found in a variety of meteorites., and Ti-,Cr-spinel occurring as accessory phases. It has a high concentration of solar-wind-implanted gases indicative of a long residence at shallow depth within the lunar regolith.

Because of the very low abundance of maficOne of the two broad categories of silicate minerals, the other being felsic, based on its magnesium (Mg) and/or iron (Fe) content. Mafic indicates silicate minerals that are predominantly comprised of Mg and/or Fe.The term is derived from those major constituents: Magnesium + Ferrum (Latin for iron) + ic (having components and the specific bulk composition, the source rock was likely a pristine highland terrane lacking igneous rocks, impact melts, mareBroad low plains surrounded by basin-forming mountains, originally thought to be a sea (pl. maria). This term is applied to the basalt-filled impact basins common on the face of the Moon visible from Earth.   components, KREEPLunar igneous rock rich in potassium (K), rare-earth elements (REE), phosphorus (P), thorium, and other incompatible elements. These elements are not incorporated into common rock-forming minerals during magma crystallization, and become enriched in the residual magma and the rocks that ultimately crystallize from it., and other mafic signatures of large impact craters. A probable source is the Feldspathic Highlands Terrane, which encompasses 65% of the lunar surface, including most of the farside. ArgonNoble gas represented by the atomic symbol Ar, that has Z = 18, and an atomic weight of 39.948. It is colorless, odorless, and very inert gas, comprising ~1 % of the Earth's atmosphere. dating studies of DaG 262 give a wide range of ages, from as old as 3.4 b.y. to only 1.7 b.y., evidence of multiple late impact events and reflecting the diversity of components mixed into the final breccia assemblage. Cosmogenic radionuclideRadioactive isotope - Atomic nuclide that decays radioactively . studies indicate that exposure at a depth of ~30 cm in the regolith lasted 500–1000 m.y., which was followed by a relatively short Moon–Earth transitWhen a small celestial body moves in front of a much larger one (as when Mercury or Venus appears in silhouette against the solar disk or when a satellite passes in front of Jupiter or Saturn). The shadow of a satellite may also transit the disk of its primary. of ~80 t.y (Nishiizumi, 2003). Thereafter, the meteorite was moderately weathered during an extended terrestrial residence lasting an additional ~80 t.y. Dar al Gani 262 is likely paired with DaG 996 (12.3 g), DaG 1042 (801.43 g), and DaG 1048 (0.801 g). It is very close in its chemistry and mineralogy to the lunar meteorite pairing of QUE 93069 and QUE 94269, and has similarities in ejection times, Moon–Earth transit times, and terrestrial ages as well. This suggests the possibility of a common ejection event for all of these meteorites. Two other lunar highland meteorites, MAC 88104/5 and Y-86032, also share close similarities with DaG 262. The specimen pictured above is a 0.09 g fragment showing a black shock vein filled with microscopic bubbles running vertically along the left edge. The photo below shows the complete mass of DaG 262 and its interior after sectioning. 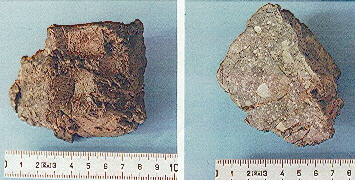 There’s a Moon in the Sky