MesosideriteOne of two main types of stony-iron meteorite, the other being pallasites. Mesosiderites are a mixture of approximately 50% basaltic, gabbroic and orthopyroxenitic silicates and 50% Ni-Fe metal and sulfides. The name derives from the Greek "mesos" meaning "middle" or "half" and "sideros" for "iron;" hence "half-iron". The silicates are, group 1B 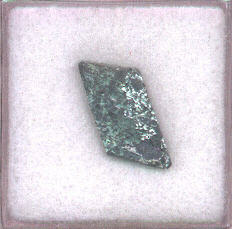 Found 1916
20° 15′ N., 12° 41′ W. In 1916, a French Legion captain named Gaston Ripert, along with his Arab guide, led his soldiers through the Western Sahara Desert in the Adrar region of Mauritania. His guide brought him to a giant metallic meteoriteWork in progress. A solid natural object reaching a planet’s surface from interplanetary space. Solid portion of a meteoroid that survives its fall to Earth, or some other body. Meteorites are classified as stony meteorites, iron meteorites, and stony-iron meteorites. These groups are further divided according to their mineralogy and mass, said to have been the source of iron for Arab blacksmiths. Smaller masses were scattered about the area, one of which, weighing 4.5 kg, was collected from on top of the giant mass. Capt. Ripert had no map, compass, or measuring stick, and was only able to make very cursory observations. According to his later recollections, the findMeteorite not seen to fall, but recovered at some later date. For example, many finds from Antarctica fell 10,000 to 700,000 years ago. location was about 10 hours by camel to the southeast of Chinguetti, among the dunes of Ouarane (in earlier transcribed notes, the location was said to be about 45 km to the southwest of Chinguetti and to the west of Aouinet N’Cher). The large metallic mass was described as measuring 100 m in width and 40 m in height, with one side polished by the wind into a mirrored finish. The base was deeply carved by the wind, and metallic, needle-like projections covered the summit of the mass; these projections could not be removed by their best efforts.

Many subsequent expeditions to the area, particularly those by Théodore Monod, Directeur de l’Institut Francaise d’Afrique Noire in Paris, failed to locate any sign of this giant meteorite among the dunes. It was therefore assumed that Capt. Ripert had misidentified a blackened, quartzite–sandstone rock outcropping as the main massLargest fragment of a meteorite, typically at the time of recovery. Meteorites are commonly cut, sliced or sometimes broken thus reducing the size of the main mass and the resulting largest specimen is called the "largest known mass". from which the smaller fragments were cleaved. However, Capt. Ripert remained steadfast in his story throughout his life. Modern radiometric dating techniques have been applied to this mystery to determine the CRE age, terrestrial age, and the pre-atmospheric size of the 4.5 kg Chinguetti mass (Welten et al., 2001). Methods employed have established a CRE age of 66 (±7) m.y, similar to that of the Estherville and Crab Orchard mesosiderites. The terrestrial age was calculated to be less than 18 (±1) t.y, a relatively short interval which is inconsistent with the description given by Capt. Ripert—that of a mass having a deeply wind-carved base. Perhaps most importantly, the pre-atmospheric diameter of Chinguetti was determined to be only ~1.2 m given a shielding depth of ~15 cm, which calls into serious doubt the existence of the giant meteoritic mass. Based on the metamorphicRocks that have recrystallized in a solid state due to changes in temperature, pressure, and chemical environment. textures of matrixFine grained primary and silicate-rich material in chondrites that surrounds chondrules, refractory inclusions (like CAIs), breccia clasts and other constituents. silicates, the mesosiderites were assigned to specific subgroups (Powell, 1971; Floran, 1978, Hewins, 1984), with Chinguetti being assigned to the least metamorphosed subgroup-1. In his scheme, Hewins proposed a further division of the least metamorphosed category based on plagioclaseAlso referred to as the plagioclase feldspar series. Plagioclase is a common rock-forming series of feldspar minerals containing a continuous solid solution of calcium and sodium: (Na1-x,Cax)(Alx+1,Si1-x)Si2O8 where x = 0 to 1. The Ca-rich end-member is called anorthite (pure anorthite has formula: CaAl2Si2O8) and the Na-rich end-member is albite abundance: a higher abundance for group 1A (24%) and a lower abundance for group 1B (21%). Visit the Bondoc page for a more thorough description of this grouping scheme. The photo above shows a 0.58 g micromount of this very rare mesosiderite. A more representative photo of Chinguetti exhibited at the Muséum National d’Histoire de Paris can be seen at their website. See also the online article by Richard Greenwood (2014), ‘The meteorite that vanished’.