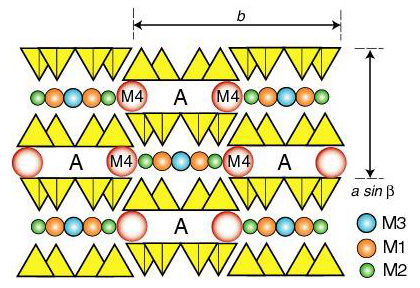 Complex family of hydrous double-chain inosilicate minerals. Amphiboles are common in terrestrial metamorphicRocks that have recrystallized in a solid state due to changes in temperature, pressure, and chemical environment. and igneous rocks, forming in the presence of water. Except for kaersutite amphibole that is commonly found in Martian shergottitesIgneous stony meteorite with a Martian origin consisting mainly of plagioclase (or a shocked glass of plagioclase composition) and pyroxene. They are the most abundant type of SNC meteorites and the type member is the Shergotty meteorite, which fell in India in 1865. Shergottites are igneous rocks of volcanic or, amphiboles in general are not often found in extraterrestrial materials.The first report of meteoritic amphibole was in April 1967 when Richard Olson announced that the amphibole richterite (soda tremolite), Na2Ca(Mg, Fe)5Si8O22(OH, F)2, had been discovered within graphiteOpaque form of carbon (C) found in some iron and ordinary chondrites and in ureilite meteorites. Each C atom is bonded to three others in a plane composed of fused hexagonal rings, just like those in aromatic hydrocarbons. The two known forms of graphite, α (hexagonal) and β (rhombohedral), have nodules in the Wichita County iron meteoriteMeteorite composed mainly of iron (Fe) and nickel (Ni) in the form of two alloys, kamacite and taenite. Due to their metallic makeup and extraordinary weight, iron meteorites are easily distinguished from ordinary rocks. Also, because they rarely break up in the air and suffer much less from the effects. In 1971, he also reported finding richterrite in the Abee (EH4) and Canyon Diablo (Iron, IAB-MG iron) meteorites. 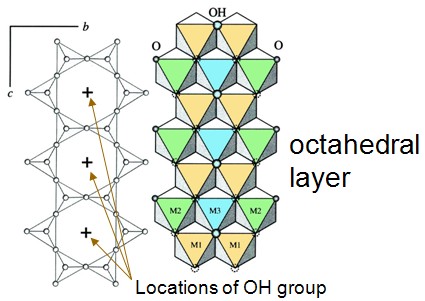 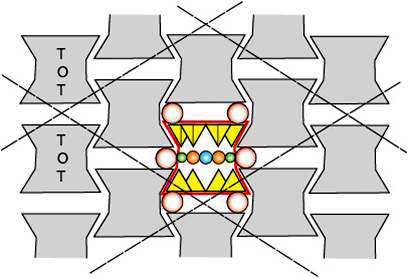 The result is an “I-beam” structure like that of pyroxeneA class of silicate (SiO3) minerals that form a solid solution between iron and magnesium and can contain up to 50% calcium. Pyroxenes are important rock forming minerals and critical to understanding igneous processes. For more detailed information, please read the Pyroxene Group article found in the Meteoritics & Classification category.. The M123 cations are coordinated by oxygens and OH- groups of the adjacent double chains, forming a TOT strip. Amphibole TOT strips are approximately twice as wide as pyroxene strips, yielding typical near 120° {110} cleavage.

Amphiboles are composed of the same cations as pyroxenes, but also have OH- groups, resulting in lower densitiesMass of an object divided by its volume. Density is a characteristic property of a substance (rock vs. ice, e.g.). Some substances (like gases) are easily compressible and have different densities depending on how much pressure is exerted upon them. The Sun is composed of compressible gases and is much and refractive indices than their pyroxene counterparts. Their general formula is A0-1X2Y5Z8O22(OH,F,Cl)2. The A site holds large cations such as Na+ and K+ and is commonly not completely filled. The X site (M4) holds a large to intermediate-size cations such as Ca2+, Na+, Mn2+, Fe2+, Mg2+, and Li+. The Y sites (M1, M2, M3) hold intermediate-sized to small cations such as Mn2++, Fe2+, Mg2+, Fe3+, Al3+, and Ti4+. Lastly, the tetrahedral Z sites in the chains hold the smallest cations Si4+ and Al3+. As indicated by the formula, substitutionReplacement of one ion or ionic group for another in the same structural site in a mineral yielding a solid solution. Most substitution in minerals is of cations which are smaller and essentially sit in a lattice of oxygen anions. Anionic substitution does occur in halides. Substitutions are classified based of F– and Cl– can occur for HO–.

The cationPositively charged ion. substitutions that produce the wide range of amphibole compositions can be complex. Multiple coupled substitutions are usually required to maintain charge balance. Simple cation substitutions include:

Cation substitutions complicate the situation. The most common amphibole, hornblende, has very variable composition owing to significant substitution of Na+ and K+ in A site and Fe3+ and Al3+ in M123 sites. Hornblende is the result of two main substitutions starting from tremolite: Si4+ + (Mg2+,Fe2+) ↔ 2Al3+, and Si4+ +  A-site ↔ Al3+ + (Na+,K+). Hornblende includes following series: magnesiohornblende-ferrohornblende, tschermakite-ferrotschermakite, edenite-ferroedenite, pargasite-ferropargasite, and magnesiohastingsite-hastingsite (mainly listed to show the spectacular mineralInorganic substance that is (1) naturally occurring (but does not have a biologic or man-made origin) and formed by physical (not biological) forces with a (2) defined chemical composition of limited variation, has a (3) distinctive set of of physical properties including being a solid, and has a (4) homogeneous names). One way of classifying hornblende is to consider the A-site occupancy and the amount of Si in the T-site. In the diagram below yellow shows the range of observed composition with orange indicating the more abundant ones (Hb = hornblende (sensu stricto), Ts = tschermakite, Ed = edenite, and Pa = pargasite). 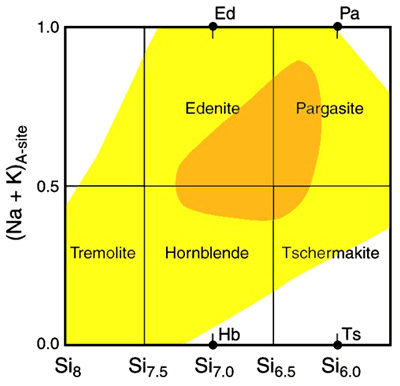 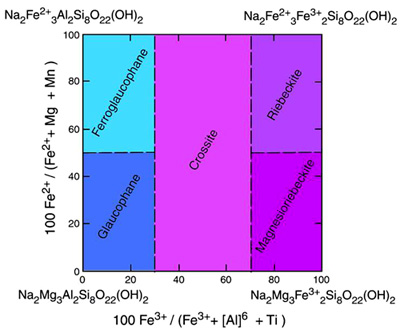 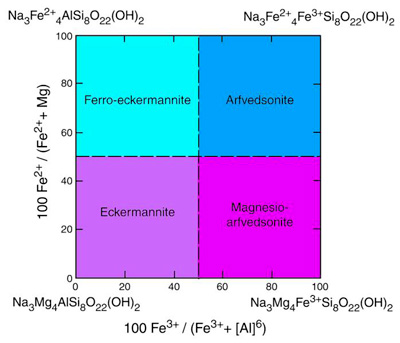 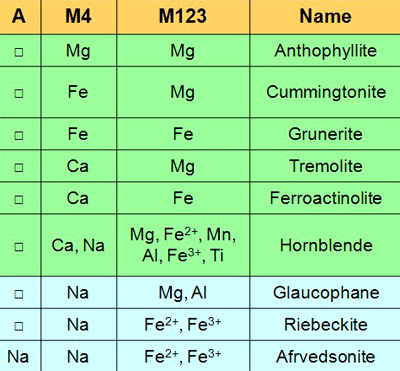