Fell August 4 or 5, 1998
~27° 20′ N., 9° 20′ W. This fallMeteorite seen to fall. Such meteorites are usually collected soon after falling and are not affected by terrestrial weathering (Weathering = 0). Beginning in 2014 (date needs confirmation), the NomComm adopted the use of the terms "probable fall" and "confirmed fall" to provide better insight into the meteorite's history. If was reportedly observed from a mountain near Zag, Morocco. A large quantity was imported by meteoriteWork in progress. A solid natural object reaching a planet’s surface from interplanetary space. Solid portion of a meteoroid that survives its fall to Earth, or some other body. Meteorites are classified as stony meteorites, iron meteorites, and stony-iron meteorites. These groups are further divided according to their mineralogy and dealer A. Lang under the name Kem Kem, and about 175 kg has been distributed under the names Tan-Tan, Sagd, and Zag, with Zag becoming the official name. Zag is a gas-rich regolithMixture of unconsolidated rocky fragments, soil, dust and other fine granular particles blanketing the surface of a body lacking an atmosphere. Regolith is the product of "gardening" by repeated meteorite impacts, and thermal processes (such as repeated heating and cooling cycles).   brecciaWork in Progress ... A rock that is a mechanical mixture of different minerals and/or rock fragments (clasts). A breccia may also be distinguished by the origin of its clasts: (monomict breccia: monogenetic or monolithologic, and polymict breccia: polygenetic or polylithologic). The proportions of these fragments within the unbrecciated material composed of both light and dark clasts (H6) within a gray clastic matrixFine grained primary and silicate-rich material in chondrites that surrounds chondrules, refractory inclusions (like CAIs), breccia clasts and other constituents. (H3–4) containing chondrulesRoughly spherical aggregate of coarse crystals formed from the rapid cooling and solidification of a melt at  ~1400 ° C. Large numbers of chondrules are found in all chondrites except for the CI group of carbonaceous chondrites. Chondrules are typically 0.5-2 mm in diameter and are usually composed of olivine. Components in Zag exhibit shock features ranging from S2 to S4, with bubbles of salty fluid inclusions entrained within xenolithic halite (NaCl) crystals found only in the H3–4 matrix component (Zolensky et al., 2013). Halite grains have previously only been found in the Monahans (1998) H5 chondriteChondrites are the most common meteorites accounting for ~84% of falls. Chondrites are comprised mostly of Fe- and Mg-bearing silicate minerals (found in both chondrules and fine grained matrix), reduced Fe/Ni metal (found in various states like large blebs, small grains and/or even chondrule rims), and various refractory inclusions (such, while both halite and sylvite (µm- to sub-µm-sized) have been observed on the external surface of numerous particles returned from the S-type asteroid Itokawa by the Hayabusa spacecraft (Noguchi et al., 2014).

Xenolithic dark inclusions are also present in both Zag and Monahans (1998), and analyses of the dark inclusions and the halite from both meteorites indicate the presence of abundant solid inclusions resolved as assemblages of silicates, oxides, phosphates, diamondOne of the naturally occurring forms of carbon found in meteorites. Each C atom is bonded through covalent sp3 hydrid orbitals to four others. The strength of the C-C bonds makes diamond the hardest naturally occurring substance (according to the Mohs scale) in terms of resistance to scratching. There are, and zeolites (microporous aluminosilicates), along with associated µm-sized organicPertaining to C-containing compounds. Organic compounds can be formed by both biological and non-biological (abiotic) processes. material including carbonElement commonly found in meteorites, it occurs in several structural forms (polymorphs). All polymorphs are shown to the left with * indicating that it been found in meteorites and impact structures: a. diamond*; b. graphite*; c. lonsdalite*; d. buckminsterfullerene* (C60); e. C540; f. C70; g. amorphous carbon; h. carbon nanotube*. compounds of aliphatic, aromatic/olefinic, vinyl-keto, carboxyl/ester, and carbonateMineral or compound containing carbon and oxygen (i.e. calcium carbonate, CaCO3, calcite). groups (Zolensky et al., 2015; Kebukawa et al., 2016). Further detailed analyses of a portion of this dark inclusionFragment of foreign (xeno-) material enclosed within the primary matrix of a rock or meteorite. conducted by Kebukawa et al. (2017) revealed very fine-grained (sub-µm-sized), primitive organics (high δ15N) which exhibit similarities to organic matter from CometConglomeration of frozen water and gases (methane, ammonia, CO2) and silicates that that formed in the outer solar system and orbits the Sun. In recent years, the description of comets has shifted from dirty snowballs to snowy dirtballs with more dust than ice. However, the ratio is less than 10-to-1. Wild 2 and/or insoluble organic matter from Bells (CM-anom) and CR chondritesChondrites are the most common meteorites accounting for ~84% of falls. Chondrites are comprised mostly of Fe- and Mg-bearing silicate minerals (found in both chondrules and fine grained matrix), reduced Fe/Ni metal (found in various states like large blebs, small grains and/or even chondrule rims), and various refractory inclusions (such. In-depth analyses of the organic matter in the Zag and Monahans halite was conducted by Chan et al. (2018), and it was found to be nearly identical to the primitive CI/CM-like composition of dwarf planetThe term "planet" originally comes from the Greek word for "wanderer" since these objects were seen to move in the sky independently from the background of fixed stars that moved together through the seasons. The IAU last defined the term planet in 2006, however the new definition has remained controversial. 1 Ceres as determined by the Dawn spacecraft. In addition, they demonstrated that the amino acidA small molecule containing and amine group (–NH2) at one end and a carboxylic acid group (–COOH) at the other. They link up with various other amino acids to form proteins. Because they are used to build proteins, most of the human body consists of amino acids with their abundance second abundances were significantly different between Zag halite and Zag matrix material, which attests to an exogenous source for the halite (see diagram below). 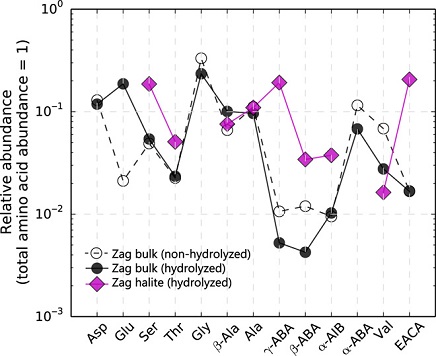 Diagram credit: Chan et al., Science Advances, vol. 4, #1, p. 6 (2018 open access)
‘Organic matter in extraterrestrial water-bearing salt crystals’
https://dx.doi.org/10.1126/sciadv.aao3521 Notably, a carbonaceous chondriteCarbonaceous chondrites represent the most primitive rock samples of our solar system. This rare (less than 5% of all meteorite falls) class of meteorites are a time capsule from the earliest days in the formation of our solar system. They are divided into the following compositional groups that, other than clastA mineral or rock fragment embedded in another rock. first identified in a Zag sample by O. Richard Norton has a mineralogy and an O-isotopic composition consistent with the CI chondriteRare meteorite class named after the Ivuna meteorite that fell in Tanzania in 1938. They are among the most primitive, friable (crumbly), and interesting of all meteorites, having undergone extensive aqueous alteration. They lack chondrules and CAIs as a result of this alteration, but contain up to 20% water, as group, although it plots along an extension of the CI group with a high Δ17O of +1.41 to +1.49 (Zolensky et al., 2003; Zolensky et al., 2016). This fine-grained CI-like clast is primarily composed of phyllosilicatesClass of hydroxyl-bearing silicate minerals with a sheet-like structure. They result from aqueous alteration are dominantly serpentine and smectite in meteorites; found in the matrixes of carbonaceous chondrites. Phyllosilicates consist of repeating sequences of sheets of linked tetrahedra (T) and sheets of linked octahedra (O). The T sheet consists of, magnetiteFe oxide, Fe2+Fe3+2O4, containing oxidized iron (Fe3+) found in the matrix of carbonaceous chondrites and as diagnostic component in CK chondrites. In CK chondrites, magnetite is typically chromian, containing several wt. % Cr2O3., and pyrrhotiteIron sulfide group of minerals whose composition ranges widely between its end members pyrrhotite (Fe7S8) whose crystal structure is monoclinic, and troilite (FeS) whose crystal structure is hexagonal. Its general formula is Fe1−xS (where x = 0 to 0.17). The troilite phase is found mainly in meteorites and in the, but is notable in that it contains 10µm-sized Na,K–Cl crystals as well as zoned carbonates (Zolensky et al., 2015). These carbonates are composed of Ca-carbonate overlying Mn-rich cores, and are surrounded by thin Na–Mg-rich rims. The association of these alkalis with the CI-like clast in the Zag meteorite suggests a likely source for the Zag (and Monahans) halite (Zolensky et al., 2015). Mineralogically similar CI-like clasts have been identified in the H5–6 Tsukuba and the H4–5 Carancas meteorites, but to date no halite has been observed (Zolensky et al., 2016). It has been posited that the halide salts were not formed in situ, but rather was incorporated along with the clastic matrix under low temperature conditions from other regions on the H chondriteOrdinary chondrites with a high content of free Ni-Fe metal (15-19 vol. %) and attracted easily to a magnet. Their main minerals are olivine (Fa16-20) and the orthopyroxene bronzite (Fs14.5-18.5), earning them their older name of bronzite chondrites. Chondrules average ~0.3 mm in diameter. Comparison of the reflectance spectra of parent bodyThe body from which a meteorite or meteoroid was derived prior to its ejection. Some parent bodies were destroyed early in the formation of our Solar System, while others like the asteroid 4-Vesta and Mars are still observable today. (Zolensky et al., 2000; Bridges et al., 2004). 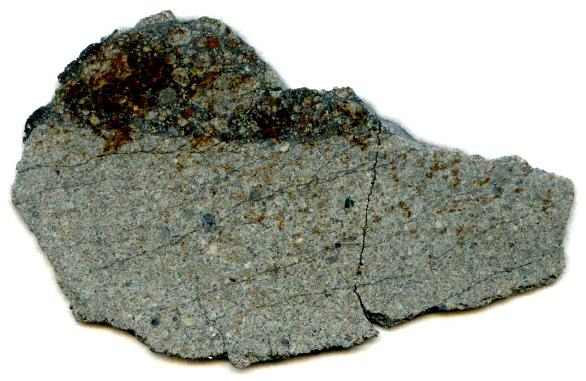 Putative halite salts within the H3–4 matrix component (top portion) of a slice of Zag exhibiting oxidationOxidation and reduction together are called redox (reduction and oxidation) and generally characterized by the transfer of electrons between chemical species, like molecules, atoms or ions, where one species undergoes oxidation, a loss of electrons,  while another species undergoes reduction, a gain of electrons. This transfer of electrons between reactants from the terrestrial environment.
Specimen acquired from R.A. Langheinrich Meteorites
An alternative scenario was proposed by Fries et al. (2013), in which the halite was derived from a nearly pure NaCl-H2O brine on a large, ancient, cryovolcanically-active body such as the dwarf planet Ceres. Analogous geysering of water with embedded halides has been observed on Saturn’s moon Enceladus (Zolensky et al., 2013). Queenie et al. (2018) propose an origin for the halite as a surface evaporite, while the primitive organic matter and the amino acids being synthesized from formaldehyde and amonia in a low-temperature aqueous environment. It is notable that the H-chondrite-like asteroid 6 Hebe has an orbitThe elliptical path of one body around another, typically the path of a small body around a much larger body. However, depending on the mass distribution of the objects, they may rotate around an empty spot in space • The Moon orbits around the Earth. • The Earth orbits around that overlaps that of Ceres, making Ceres a reasonable source for the exogenous halite. Such an orbital resemblance would also have been important to the preservation of halite crystals during low-impact transference from Ceres to 6 Hebe (Fries et al., 2013). 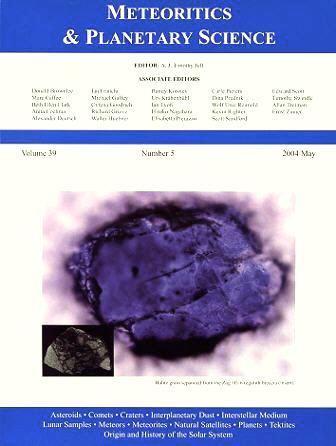 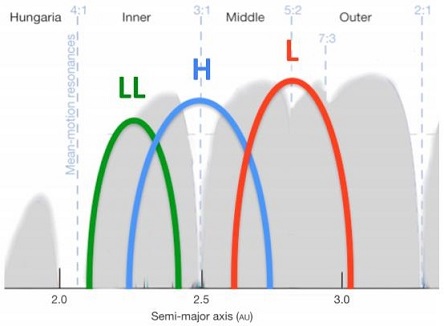 Diagram credit: Binzel et al., 47th LPSC, #1352 (2016) The average CRE age of Zag based on 3He, 21Ne, and 38Ar is calculated to be 5.1 (±0.5) m.y., close to the peak of the latest of the three breakup events determined for H chondrites (Eugster et al., 2007). It has been estimated that 6 Hebe could contribute ~10% of the meteorite flux to Earth and that it may be the source of one of the major ordinary chondrite groups. Models show that by mixing a component of 40% FeNi-metal with 60% H5 chondrite, an exact match to the spectra of 6 Hebe is produced. The IIE irons could then be created through impact melting on the metal-rich H chondrite parent body to produce melt sheets or pods near the surface. Read more about the formation of IIE irons on the Miles page. Be that as it may, hydrocode models reveal inconsistencies between expected and observed CRE ages based on the scenario of direct injection into resonances. The steady delivery of H chondrite material from 6 Hebe to Earth also remains unexplained. Current studies by Rubin and Bottke (2009) have led to the conclusion that family-forming events resulting in large meteoroidSmall rocky or metallic object in orbit around the Sun (or another star). reservoirs having homogenous compositions, and which are located near dynamical resonances such as the Jupiter 3:1 mean motion resonance, are a more likely source of the most prevalent falls including the H chondrites. See further details on the NWA 2898 page. The specimen of Zag shown above is a 1.0 g fragment displaying signs of brecciation. 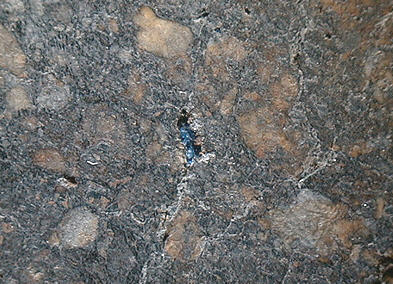