Iron, ungroupedModifying term used to describe meteorites that are mineralogically and/or chemically unique and defy classification into the group or sub-group they most closely resemble. Some examples include Ungrouped Achondrite (achondrite-ung), Ungrouped Chondrite (chondrite-ung), Ungrouped Iron (iron-ung), and Ungrouped Carbonaceous (C-ung)., recrystallized octahedriteMost Common type of iron meteorite, composed mainly of taenite and kamacite and named for the octahedral (eight-sided) shape of the kamacite crystals. When sliced, polished and etched with an acid such as nitric acid, they display a characteristic Widmanstätten pattern. Spaces between larger kamacite and taenite plates are often 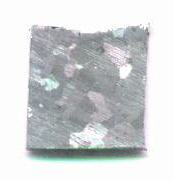 Found 1902
45° 22′ N., 122° 35′ W. This historic iron meteoriteMeteorite composed mainly of iron (Fe) and nickel (Ni) in the form of two alloys, kamacite and taenite. Due to their metallic makeup and extraordinary weight, iron meteorites are easily distinguished from ordinary rocks. Also, because they rarely break up in the air and suffer much less from the effects, weighing 14,900 kg, was discovered by a Welsh immigrant named Ellis Hughes while prospecting for minerals. The location was 3 km northwest of Willamette, Clackamas County, Oregon, which is presently a part of West Linn. The iron mass was probably deposited at its findMeteorite not seen to fall, but recovered at some later date. For example, many finds from Antarctica fell 10,000 to 700,000 years ago. location by the largest floods ever scientifically documented, the Missoula Floods, which occurred at the end of the last Ice Age about 14,000 years ago. Willamette is a heavily weathered meteoriteWork in progress. A solid natural object reaching a planet’s surface from interplanetary space. Solid portion of a meteoroid that survives its fall to Earth, or some other body. Meteorites are classified as stony meteorites, iron meteorites, and stony-iron meteorites. These groups are further divided according to their mineralogy and, possibly losing a fourth of its original weight through tens of thousands of years of terrestrial corrosion in the rainy Oregon valley. Over 8.5 kg of oxide–shale was present inside the pit, and nickel that was leached from the meteorite was found in the surrounding ground. The apex has lost 1–2 cm from its surface, and any fusion crustMelted exterior of a meteorite that forms when it passes through Earth’s atmosphere. Friction with the air will raise a meteorite’s surface temperature upwards of  4800 K (8180 °F) and will melt (ablate) the surface minerals and flow backwards over the surface as shown in the Lafayette meteorite photograph below., regmaglypts, or flow structures that might have been present on the meteorite have since been removed.

Through long-term electrochemical action of dilute sulfuric acid, produced from the dissolution of troiliteBrass colored non-magnetic mineral of iron sulfide, FeS, found in a variety of meteorites., an array of pits, holes, and deep cavities has been sculpted, while the material persisting between these cavities has taken the form of tapered, hourglass-shaped pedestals (see bottom photo). When found, and probably upon entry, the bell-shaped mass was oriented with its blunt apex pointing into the ground, and the corroded, cavity-riddled, rear side directly level with the ground. Consequently, the cavities and pedestals are mostly aligned perpendicular to the rear side of the meteorite and the ground. Because the meteorite was found situated on land belonging to the Oregon Iron and Steel Company, Mr. Hughes tried to purchase the portion of land on which it was located. However, after failing to acquire the necessary funds for the purchase, he and his 15-year-old son (as the story is told) prepared to secretly relocate the iron mass nearly 1.2 km to his own property. He first constructed a strong cart made of logs, with wheels fashioned out of tree stumps. Using a block and tackle, he utilizing his horse as a winch by walking it around a capstan from which a wire rope was attached to the meteorite. Through his mechanism he slowly levered the huge iron mass high enough to overturn it onto the cart. He then used this rudimentary winching procedure over 40 times to pull the cart over soft ground and obstructions and onto his own property, which amazingly took only three months. Thereafter, Mr. Hughes charged visitors 25¢ admission to view his meteorite, until the day an attorney for the Oregon Iron and Steel Company noticed the cleared path leading back to their land. Mr. Hughes soon found himself a defendant in Clackamas County Circuit Court, Case #7587. He based his defense on the fact that he rightfully found an abandoned Indian relic, previously revered by the Clackamas tribe as their Tomonowos, variously translated as ‘Heavenly Visitor’ or ‘Visitor From the Moon’. In testimony given by an Elder Wasco Indian, he said he had been told by the Clackamas Chief Wochimo that before battles young warriors would dip their arrows into the sacred water which had collected in the basins of the meteorite. Others testified that Native doctors of the Clackamas Tribe used the meteorite ceremonially in healing and purifying rituals. Other testimony revealed that songs and dances based on the ‘Heavenly Visitor’ have been passed down from Tribal ancestors. Nevertheless, the jury found in favor of the Iron and Steel Company, and this verdict was upheld in the Oregon State Supreme Court with the ruling:
‘Meteorites, though not embedded in the earth, are real estate, and consequently belong to the owner of the land on which they are found.’ Following a short period on display at the Lewis and Clark Centennial Exposition in Portland, the meteorite was sold to a New York heiress, Elizabeth E. Dodge II, for $20,600, who then presented it to the American Museum of Natural History in New York in 1906. In 1935, the Hayden Planetarium was built around the Willamette and Cape York masses. In the late 1990’s, amid publicity surrounding the construction of the Museum’s Rose Center of Earth and Space, the Clackamas Tribe, now the Confederated Tribes of the Grand Ronde Community of Oregon, filed a claim under the Native American Graves Protection and Repatriation Act to have the meteorite returned to their lands in Oregon. A federal lawsuit was filed by the AMNH against the Grand Ronde, and the fate of the meteorite was finally settled out-of-court. An agreement was made recognizing the Tribes spiritual relationship with the meteorite, and ensuring an annual private visit to the meteorite by the Grand Ronde for religious, historical, and cultural purposes. Although Willamette shows compositional similarities to members of both the IIIAB and IIIE groups, Rubin et al. (2015) observed significant differences in inclusions from these iron groups; therefore, they suggest the reclassification of Willamette as an ungrouped iron. The meteorite exhibits a recrystallized texture with only remnant evidence of a medium Thomson (Widmanstätten) structure, the result of a significant impact-heating event. Following an extended period of annealing, another lesser shock event produced Neumann bands and further annealing of kamaciteMore common than taenite, both taenite and kamacite are Ni-Fe alloys found in iron meteorites. Kamacite, α-(Fe,Ni), contains 4-7.5 wt% Ni, and forms large body-centered cubic crystals that appear like broad bands or beam-like structures on the etched surface of a meteorite; its name is derived from the Greek word at depth. Troilite nodules exhibit features of crushing and limited shock-melting, while monocrystalline schreibersiteNi-Fe phosphide mineral, (Fe,Ni)3P, yellowish in color and predominantly found in iron and stony-iron meteorites. Schreibersite can also be found in a variety of other meteorites including some acapulcoites, aubrites, enstatite chondrites and achondrites, lunars, ureilites, winonaites and a smattering of other meteorite types like CM, CO and CB. Schreibersite occurs throughout the meteorite. Structural evidence indicates the meteorite experienced a molten stage on its parent bodyThe body from which a meteorite or meteoroid was derived prior to its ejection. Some parent bodies were destroyed early in the formation of our Solar System, while others like the asteroid 4-Vesta and Mars are still observable today.. Based on cooling rate models, the diameter of the parent body is estimated to have been ~100 km, taking ~50 m.y. for the coreIn the context of planetary formation, the core is the central region of a large differentiated asteroid, planet or moon and made up of denser materials than the surrounding mantle and crust. For example, the cores of the Earth, the terrestrial planets and differentiated asteroids are rich in metallic iron-nickel. to solidify. The 2.81 g partial slice of Willamette pictured above was sectioned from the 96.47 g mass shown below, previously purchased at the 2002 Macovich Auction in Tucson, Arizona. This 96.47 g mass was acquired for the Macovich Collection of Meteorites through a trade with the American Museum of Natural History in New York. 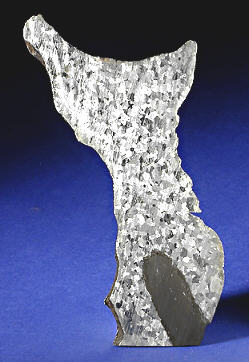 Photo of the 96.47 g section of Willamette from which the above specimen was sectioned
Photo courtesy of The Macovich Collection of Meteorites. 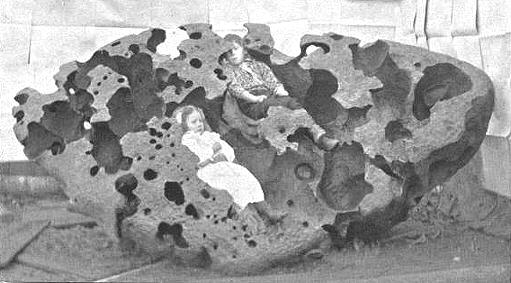 The heavily corroded rear side of the Willamette meteorite 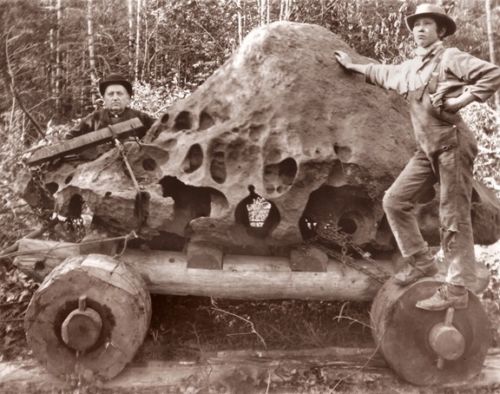