Found 1863
21° 30.25′ N., 50° 28.30′ E. A massive meteoric aerial burst equal to ~12 kilotons lit up the sky over desert sands in the Empty Quarter of the Rub’ al Khali, Saudi Arabia, at a site known as Wabar or ‘Al Hadidah’ (= the iron) in Arabic. The name Wabar is a transliteration of Ubar, but is not the actual site of the legendary lost city that was rediscovered in 1992 at a site 400 km south of the Wabar site. The Wabar site was known to the local Bedouins for generations, but remained undescribed until visited by the British explorer H. Philby in 1932, and later surveyed by E. Shoemaker and J. Wynn in 1994–95. The impact site consists of three craters named Philby-A (64 m diameter), Philby-B (116 m diamter), and ’11 m crater’, all of which since their discovery have experienced repeated infilling and excavation by aeolian sands (Gnos et al., 2013). The three impact craters are situated on 125 acres of a constantly shifting dune field. 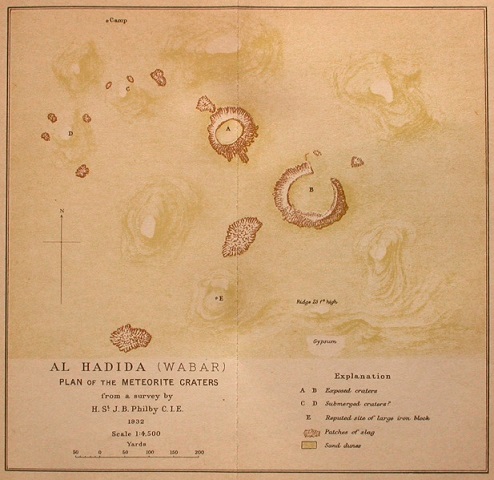 Map of the Wabar site (from the book: The Empty Quarter by Philby, 1933)
Courtesy of Marmet-Meteorites Found dispersed in and around the craters was shock-bleached/-lithified sand, both black and white-greenish, aerodynamically-shaped, vesicularVesicles appear in nature when they are produced within lava (extrusive aphanitic igneous rock) whose dissolved gases come out of solution (are released) due to the drop in pressure during an eruption. The resulting lava solidifies around the gas bubbles capturing their shape inside and outside the rock. Vesicles do glass bombs (some containing highly shocked silicateThe most abundant group of minerals in Earth's crust, the structure of silicates are dominated by the silica tetrahedron, SiO44-, with metal ions occurring between tetrahedra). The mesodesmic bonds of the silicon tetrahedron allow extensive polymerization and silicates are classified according to the amount of linking that occurs between the phases such as lechatelieriteAn amorphous silica glass formed naturally by the heat of impact/detonation of a large meteorite on/over quartz sand. Lechatelierite is found as an inclusion in Libyan Desert Glass. Most commonly formed during lightning strikes in sand. Named for Henry Louis Le Chatelier (1850-1936), a French chemist., coesiteHigh-pressure polymorph of silicon dioxide (SiO2). Has the same chemical composition as cristobalite, stishovite, seifertite and tridymite but possesses a different crystal structure. Coesite forms at intense pressures of above about 2.5 GPa (25 kbar) and temperature above about 700 °C, and was first found naturally on Earth in impact, and stishoviteDense, high-pressure phase of quartz; so far identified only in shock-metamorphosed, quartz-bearing rocks from meteorite impact craters. Stishovite was synthesized in 1961 before it was discovered at Meteor Crater, Arizona. Its structure consists of parallel chains of single SiO6 octahedra. The octahedra are on their sides, sharing opposing edges. Image), black melt droplets referred to as ‘pearls’, and remnants of FeNi-metal spalled from the impacting body (Gnos et al., 2013).

Wabar ‘pearl’ Results of petrography and microchemistry conducted by Hamann et al. (2013) reveal that the black impactiteSlag-like glassy object found on surface of the Earth formed from rock melted by the impact of a meteor. This word is also applied to rocks that have been affected by impact (impact breccia, suevite, etc.) The backscattered electron photograph below shows the impactite’s complex internal structure. is composed of a quenched, vesicular, glassy mixture of two immiscibleThe property of liquids that are mutually insoluble (won't mix together) such as oil and water or metallic and silicate melts. liquids; i.e., an emulsion of one phase enriched in Fe+2 and Ca+2 (derived from the FeNi-metal of the projectile) appearing as nm–µm-scale spherules, within a dominant phase enriched in silicaSilicon dioxide, SiO2. (derived from the 20–30-m-deep target sands). A third immiscible component consists of µm-scale metallic FeNi-spherules (up to sub-mm scale) representing projectile remnants.

The largest known mass, which was finally collected in 1965 400 m south-southwest of the largest craterBowl-like depression ("crater" means "cup" in Latin) on the surface of a planet, moon, or asteroid. Craters range in size from a few centimeters to over 1,000 km across, and are mostly caused by impact or by volcanic activity, though some are due to cryovolcanism., is a shield-shaped, aerodynamically-oriented, 2,040 kg mass known as the ‘Camel’s Hump’. Other surface recoveries include a 210 kg mass and several other multi-kg masses, as well as numerous small, twisted fragments like the 14.1 g specimen pictured above. Additional meteoriteWork in progress. A solid natural object reaching a planet’s surface from interplanetary space. Solid portion of a meteoroid that survives its fall to Earth, or some other body. Meteorites are classified as stony meteorites, iron meteorites, and stony-iron meteorites. These groups are further divided according to their mineralogy and remnants uncovered below the sand have been completely weathered to shale. Examination of the distribution of the craters and the individual regmaglypted fragments led Gnos et al. (2013) to conclude that the meteoroidSmall rocky or metallic object in orbit around the Sun (or another star). arrived from the south. 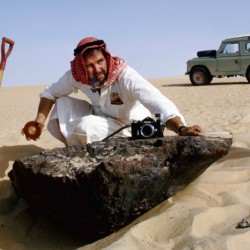 The Wabar ‘Camel’s Hump’ mass in-situ
Photo by Lynn Abercrombie, 1965 Wabar is a member of the IIIAB group of irons, a group considered to be closely related to group IIIE (Bishop et al., 2012), and exhibits a medium Thomson (Widmanstätten) structure (Buchwald, 1975). Black glass pearls like the one pictured below were found about a half-mile northwest of the crater, indicating that a wind was blowing from the southeast at the time of the fallMeteorite seen to fall. Such meteorites are usually collected soon after falling and are not affected by terrestrial weathering (Weathering = 0). Beginning in 2014 (date needs confirmation), the NomComm adopted the use of the terms "probable fall" and "confirmed fall" to provide better insight into the meteorite's history. If. This is consistent with the prevailing wind conditions during the early evening hours in early Spring. These pearls are composed of 90% local quartzComposed of SiO2, quartz is one of the silica group minerals most common in Earth's crust, but never found in meteorites as inclusions visible to the naked eye. Quartz in meteorites has been found in very small quantities in eucrites, other calcium-rich achondrites, and in the highly reduced E chondrites1. sand and 10% microscopic particles of meteoritic FeNi-metal. Gnos et al. (2013) ascertained that the pearls contain the largest component of projectile material, which lowered the melting pointTemperature at which a solid changes to a liquid. A completely pure crystalline substance has an exact temperature at which it melts. Impure substances and amorphous substances will begin melting at one temperature and finish at another. For these substances the term "melting range" is more appropriate. Under some conditions and the viscosityThe degree to which a liquid resists flow.   High-viscosity liquids (e.g., "molasses in winter") resist flow to a great degree. More formally,  viscosity of a fluid is the measure of its resistance to gradual deformation by shear stress or tensile stress. Water has a low kinetic viscosity of 0.6959 of the melt, allowing for complete degassing as attested by their lack of vesicles. It is estimated that the original mass weighed at least 3,500 tons and that the largest impacting fragment was ~9 m in diameter. The impactite distribution pattern indicated to the early investigators that the object arrived from the northwest at a shallow angle. From measurements of the rate of infilling of the craters by sand, as well as through TL studies, it is estimated that the fall occurred between 235 and 416 years ago, or an average of 289 (±46) years ago. While there is some testimony that the fall could be associated with a witnessed event that occurred in 1863, current evidence suggests an earlier fall. Notably, two historical poems written by separate authors have been found that describe the fall of a fireballA fireball is another term for a very bright meteor, generally brighter than magnitude -4, which is about the same magnitude of the planet Venus as seen in the morning or evening sky. A bolide is a special type of fireball which explodes in a bright terminal flash at its end, often with visible fragmentation. over Tarim, Yemen, a town located 620 km south-southwest of the Wabar site (H. Basurah, 2003). In these poems, the authors specify that the fall occurred during the night of Saturday, September 1, 1704 (~300 years ago), a date in excellent accord with the TL data. The trajectory of this fireball over Tarim, traveling approximately south to north, is also consistent with the conclusion of Gnos et al. (2013) based on the location of impact craters, ejectaFractured and/or molten rocky debris thrown out of a crater during a meteorite impact event, or, alternatively, material, including ash, lapilli, and bombs, erupted from a volcano. blankets, and later-arriving individual meteorite fragments. Of the nearly two hundred craters discovered on Earth, the Wabar Crater is one of only seventeen to contain remnants of the original impacting object. An iron pendant known as ‘Qarabawi’s Charm’ (see photo courtesy of Mike Hankey), which had previously been hung around a camel’s neck by a member of the Egyptian Ababda nomadic tribe to ward off evil, was sent by the Egyptian Geological Museum in Cairo to the Smithsonian Institution in 1974 (Mayne et al., 2010). Careful studies verified its meteoritic origin through its Ni content of 6.8% and the presence of taeniteLess common than kamacite, both taenite and kamacite are Ni-Fe alloys found in iron meteorites. Taenite, γ-(Fe,Ni), has 27-65 wt% Ni, and forms small crystals that appear as highly reflecting thin ribbons on the etched surface of a meteorite; the name derives from the Greek word for "ribbon." lamellae. An extensive comparitive search of all Middle-East irons revealed that the Ni content of the Wabar iron meteoriteMeteorite composed mainly of iron (Fe) and nickel (Ni) in the form of two alloys, kamacite and taenite. Due to their metallic makeup and extraordinary weight, iron meteorites are easily distinguished from ordinary rocks. Also, because they rarely break up in the air and suffer much less from the effects is identical to that of the Camel Charm. Advanced laboratory analyses of the two materials were conducted, and it was determined that the most likely source material for the Camel Charm is the Wabar iron (Mayne et al., 2019).