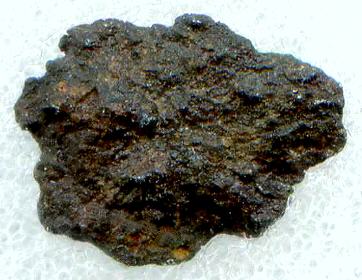 Found May 18, 2004
34° 44′ 48′ N., 114° 12′ 36′ W. An iron mass weighing 8.6 g was initially found in the Franconia strewn fieldArea on the surface containing meteorites and fragments from a single fall. Also applied to the area covered by tektites, which are produced by large meteorite impacts. Strewnfields are often oval-shaped with the largest specimens found at one end. Given that the largest specimens go the greatest distance, a meteoroid's in in Mojave County, Arizona by Pete Meyers, and several months later (October 29, 2005) a similar type of iron mass also lacking fusion crustMelted exterior of a meteorite that forms when it passes through Earth’s atmosphere. Friction with the air will raise a meteorite’s surface temperature upwards of  4800 K (8180 °F) and will melt (ablate) the surface minerals and flow backwards over the surface as shown in the Lafayette meteorite photograph below. and weighing 43.7 g was found by Jim Smaller. Hundreds of individual pieces, most weighing under 1 g, were subsequently recovered in the area. The TKW is recorded as 52.3 g but may be as high as 1,000 g. Samples were analyzed at the University of Arizona (D. Schrader et al.), along with the Kingsborough Community College and the American Museum of Natural History in New York (H. Connolly). A reflected-light photo of a thin section of a Sacramento Wash 005 specimen was described in ‘Meteorite Picture of the Day’ for January 18, 2014 by Laurence Garvie—Center for MeteoriteWork in progress. A solid natural object reaching a planet’s surface from interplanetary space. Solid portion of a meteoroid that survives its fall to Earth, or some other body. Meteorites are classified as stony meteorites, iron meteorites, and stony-iron meteorites. These groups are further divided according to their mineralogy and Studies at Arizona State University. 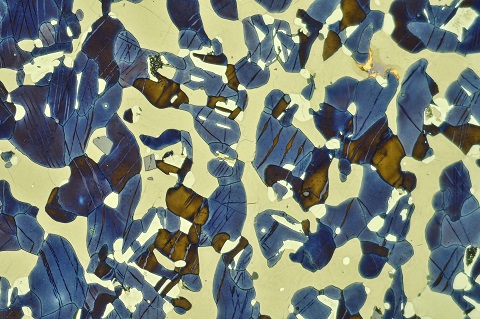 These iron pieces are reddish-brown in color, indicating mild weathering on the surface, but they show a fresh interior. Most specimens lack fusionProcess in which two lighter atomic nuclei combine to form a heavier atomic nucleus. Very high temperatures are normally required in order for atomic nuclei to collide with sufficient energy to overcome the Coulomb barrier (their mutual electrostatic repulsions). Fusion that occurs under high-temperature conditions is called thermonuclear fusion. Fusion crustOutermost layer of a differentiated planet, asteroid or moon, usually consisting of silicate rock and extending no more than 10s of km from the surface. The term is also applied to icy bodies, in which case it is composed of ices, frozen gases, and accumulated meteoritic material. On Earth, the, although some individuals that were studied exhibited bluish fusion crust with flow lines. Surface pits are thought to have been produced by troiliteBrass colored non-magnetic mineral of iron sulfide, FeS, found in a variety of meteorites. cell plucking through ablationGradual removal of the successive surface layers of a material through various processes. • The gradual removal and loss of meteoritic material by heating and vaporization as the meteoroid experiences frictional melting during its passage through the atmosphere. The resulting plasma ablates the meteor and, in cases where a meteor or later weathering. Sacramento Wash 005 is composed of FeNi-metal (both kamaciteMore common than taenite, both taenite and kamacite are Ni-Fe alloys found in iron meteorites. Kamacite, α-(Fe,Ni), contains 4-7.5 wt% Ni, and forms large body-centered cubic crystals that appear like broad bands or beam-like structures on the etched surface of a meteorite; its name is derived from the Greek word and taeniteLess common than kamacite, both taenite and kamacite are Ni-Fe alloys found in iron meteorites. Taenite, γ-(Fe,Ni), has 27-65 wt% Ni, and forms small crystals that appear as highly reflecting thin ribbons on the etched surface of a meteorite; the name derives from the Greek word for "ribbon."), troilite, metallic copper, chromiteBrownish-black oxide of chromium and iron (Cr-Fe oxide), Cr2FeO4, found in many meteorite groups., and other minor phases. Sacramento Wash 005 is very similar to the meteorite MET 00428 and is similar in many respects to HOW 88403 (the latter not derived from the H-chondrite parent bodyThe body from which a meteorite or meteoroid was derived prior to its ejection. Some parent bodies were destroyed early in the formation of our Solar System, while others like the asteroid 4-Vesta and Mars are still observable today.), in that they are all S-rich FeNi-metal meteorites formed in high-temperature environments but experienced varying cooling rates. H-chondrite-like silicates are present in these meteorites, and a chondrule-bearing inclusionFragment of foreign (xeno-) material enclosed within the primary matrix of a rock or meteorite. (POP and RP type chondrulesRoughly spherical aggregate of coarse crystals formed from the rapid cooling and solidification of a melt at  ~1400 ° C. Large numbers of chondrules are found in all chondrites except for the CI group of carbonaceous chondrites. Chondrules are typically 0.5-2 mm in diameter and are usually composed of olivine) comparable to an H4 chondriteChondrites are the most common meteorites accounting for ~84% of falls. Chondrites are comprised mostly of Fe- and Mg-bearing silicate minerals (found in both chondrules and fine grained matrix), reduced Fe/Ni metal (found in various states like large blebs, small grains and/or even chondrule rims), and various refractory inclusions (such was identified in Sacramento Wash 005. It is thought that these Fe- and S-rich meteorites formed by impact-generated melting on the H-chondrite parent body (Schrader et al., 2010). The cellular troilite in Sacramento Wash 005 reflects a relatively slow cooling rate after the impact event, with formation possibly occurring in a subsurface location. More rapid cooling was experienced by meteorites like the impact-melt Sahara 03505. These iron specimens represent a distinct meteorite type that is different from the H-chondrite-related IIE irons as well as the H-metal meteorite LEW 88432, the latter thought to be a metalElement that readily forms cations and has metallic bonds; sometimes said to be similar to a cation in a cloud of electrons. The metals are one of the three groups of elements as distinguished by their ionization and bonding properties, along with the metalloids and nonmetals. A diagonal line drawn nodule extricated from an H-chondrite meteorite host. By contrast, these S-rich irons are thought to have formed by impact-melt processes and are considered to constitute a new subgroup, termed sulfide-iron meteorites, as proposed by D’Orazio et al. (2009); members presently include Sacramento Wash 005, Sahara 03505, RBT 04162/04299, MET 00428, and HOW 88403. The subgram individual fragment of Sacramento Wash 005 shown above was found by J. Smaller and then acquired by J. Humphries during the 2009 Denver MineralInorganic substance that is (1) naturally occurring (but does not have a biologic or man-made origin) and formed by physical (not biological) forces with a (2) defined chemical composition of limited variation, has a (3) distinctive set of of physical properties including being a solid, and has a (4) homogeneous Show. Excellent detailed photos of the interior of SaW 005 iron specimens are shown below courtesy of Mirko Graul. 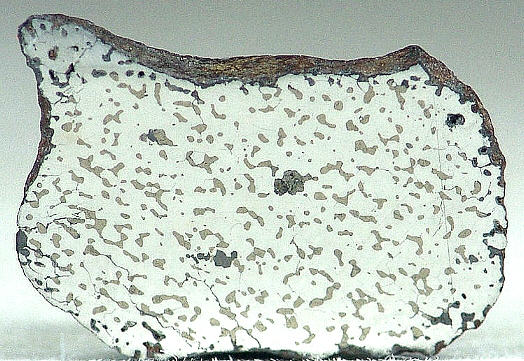 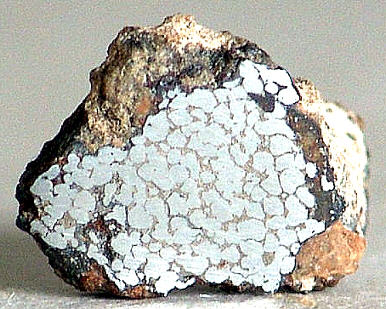