A common question newcomers to the world of collecting meteorites ask is, “Can I really collect meteorites?” The short answer is yes, you can. Meteorites are not reserved just for scientists or museums, they can be enjoyed by anyone with nearly any budget. There are thousands of meteorites available for you to purchase for your collection from a number of established and trusted dealers all over the world, including SkyFall Meteorites. Whether your purchase is a one time gift or the beginning of a collection, there is nothing more exciting than holding in your hand a meteoriteWork in progress. A solid natural object reaching a planet’s surface from interplanetary space. Solid portion of a meteoroid that survives its fall to Earth, or some other body. Meteorites are classified as stony meteorites, iron meteorites, and stony-iron meteorites. These groups are further divided according to their mineralogy and that is likely (much) older than the Earth and to then think about its travels, history and secrets it holds within. Buy one now and once in your hand, you will findMeteorite not seen to fall, but recovered at some later date. For example, many finds from Antarctica fell 10,000 to 700,000 years ago. there is no other experience quite like it.

You Can Buy, Sell, Trade, Hunt and Collect Meteorites – Real Rocks from Space!

Can I really own and collect meteorites?
Of course you can. It’s a rock, only this rock has an extraterrestrial origin. Just as minerals like gold, diamonds, rubies and sapphires are sold by mineralInorganic substance that is (1) naturally occurring (but does not have a biologic or man-made origin) and formed by physical (not biological) forces with a (2) defined chemical composition of limited variation, has a (3) distinctive set of of physical properties including being a solid, and has a (4) homogeneous dealers all around the world, so too are meteorites sold to all kinds of people from every walk of life. Though you cannot legally purchase or own a moon rock brought back to earth by NASA astronauts, you can buy, sell and enjoy moon meteorites that came to Earth on their own. You can even own a meteorite that originated from Mars.

Rocks from space, like fossils and minerals, can legally be bought and sold from most parts of the world. Meteorites are not the sole domain of scientific institutions and museums. However, like these other natural history categories, different countries have different laws and it is therefore imperative to work with a respected dealer that can explain and understand these laws to ensure that your meteorite was obtained legally. There are few online resources regarding laws surrounding meteorites, however the Law of Ownership and Control of Meteorites by Douglas G. Schmitt is a good starting place.

eBay can be a great source of authentic meteorites from well respected dealers. However, eBay is also full of fakes (e.g. hematiteFe-oxide mineral (Fe2O3) that may be the major cause of the red color on Mars. Coarser-grained gray hematite has the same chemical formula as the red variety, but a different crystalline structure. Deposits of gray hematite found in the Terra Meridiani region of Mars may suggest that water once circulated, magnetiteFe oxide, Fe2+Fe3+2O4, containing oxidized iron (Fe3+) found in the matrix of carbonaceous chondrites and as diagnostic component in CK chondrites. In CK chondrites, magnetite is typically chromian, containing several wt. % Cr2O3. and man-made slag being sold as meteorites) and, even more insidious, real but cheap meteorites being misrepresented as much rarer and more expensive meteorites. Buying from trusted dealers will ensure that what you are buying is exactly what it is supposed to be and SkyFall Meteorites guarantees the authenticity of its specimens forever.

SkyFall Meteorites caters to a large and diverse customer base which includes universities, museums, scientific institutions, and private collectors worldwide. If you’re not a member of our meteorite newsletter sign up now to receive updates and notices when new items are posted to the website, and for news and information from the meteorite world.

Where do meteorites come from?
Scientists believe that most meteorites come from the asteroid belt that lies between Mars and Jupiter. In rare cases meteorites sometimes come from Mars and the Moon. Simply put, meteorites are rocks that originate from within our solar systemThe Sun and set of objects orbiting around it including planets and their moons and rings, asteroids, comets, and meteoroids.. They are witnesses to the earliest days of the formation of our solar systemDefinable part of the universe that can be open, closed, or isolated. An open system exchanges both matter and energy with its surroundings. A closed system can only exchange energy with its surroundings; it has walls through which heat can pass. An isolated system cannot exchange energy or matter with and we continue to learn from them how our solar system formed, the role they played in establishing life on Earth and give us insights into the deepest regions of our planetThe term "planet" originally comes from the Greek word for "wanderer" since these objects were seen to move in the sky independently from the background of fixed stars that moved together through the seasons. The IAU last defined the term planet in 2006, however the new definition has remained controversial..

How do rocks from the Moon & Mars get to Earth?
Anyone who has ever viewed the Moon has seen that it’s pock-marked with craters all over it’s surface. These craters are formed by impacts of meteoroids onto the Moon’s surface over millions of years. Sometimes these impacts are so powerful they expel lunar material out into space. This is relatively easy to do on the Moon when compared to Earth as the Moon has no atmosphere and 1/6th the gravityAttractive force between all matter - one of the four fundamental forces. of Earth.

Blast Off!
So when a larger sized meteoroidSmall rocky or metallic object in orbit around the Sun (or another star). impacts the Moon, material is blasted out into space at thousands of mile per hour. This material can float around in space and find an orbitThe elliptical path of one body around another, typically the path of a small body around a much larger body. However, depending on the mass distribution of the objects, they may rotate around an empty spot in space • The Moon orbits around the Earth. • The Earth orbits around around the SunOur parent star. The structure of Sun's interior is the result of the hydrostatic equilibrium between gravity and the pressure of the gas. The interior consists of three shells: the core, radiative region, and convective region. Image source: http://eclipse99.nasa.gov/pages/SunActiv.html. The core is the hot, dense central region in which the. Sometimes this material crosses the path of Earth’s orbit and if the Earth is there when it does the meteoroid then enters the Earth atmosphere thereby becoming a meteorHow long Sonic booms Of the several 10s of tons of cosmic material entering Earth's atmosphere each day, only about one ton reaches the surface. An object's chance of survival depends on its initial mass, speed and angle of entry, and friability (tendency to break up). Micrometeoroids radiate heat so. If the meteor survives impact with the ground then it becomes a meteorite. This goes for ALL meteorite on Earth.

They look like rocks on fire! No really, they look like you would expect them to look after being subject to the intense heat of flying at thousands of mile an hour through our atmosphere. Meteorites look like they’ve been burned, and usually resemble a piece of charcoal right after they fallMeteorite seen to fall. Such meteorites are usually collected soon after falling and are not affected by terrestrial weathering (Weathering = 0). Beginning in 2014 (date needs confirmation), the NomComm adopted the use of the terms "probable fall" and "confirmed fall" to provide better insight into the meteorite's history. If.

FusionProcess in which two lighter atomic nuclei combine to form a heavier atomic nucleus. Very high temperatures are normally required in order for atomic nuclei to collide with sufficient energy to overcome the Coulomb barrier (their mutual electrostatic repulsions). Fusion that occurs under high-temperature conditions is called thermonuclear fusion. Fusion CrustOutermost layer of a differentiated planet, asteroid or moon, usually consisting of silicate rock and extending no more than 10s of km from the surface. The term is also applied to icy bodies, in which case it is composed of ices, frozen gases, and accumulated meteoritic material. On Earth, the
This outer black crust is called Fusion Crust. This black crust is a thin layer of oxidizedOxidation and reduction together are called redox (reduction and oxidation) and generally characterized by the transfer of electrons between chemical species, like molecules, atoms or ions, where one species undergoes oxidation, a loss of electrons,  while another species undergoes reduction, a gain of electrons. This transfer of electrons between reactants iron and other minerals which gives it it’s black color. Meteorites also exhibit what’s called in the scientific world as regmaglypts, or thumbprints as seen here.

Fusion crust is usually black or very dark brown in color. Over time a meteorites fusion crust can change color or disappear completely depending on the type of meteorite it is. This is caused by weathering and the erosionRemoval of weathered rocks by moving water, wind, or ice. of the outer surface of the stone when rain wind, sand and other inclement

The Start of a Collection 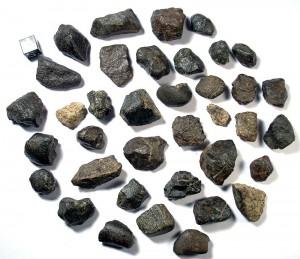