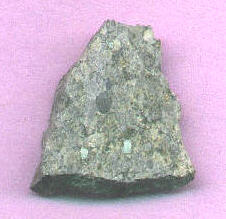 Fell July 2, 1982
32° 05′ N., 121° 30′ E. A single stone of 1,275 g fell at 5:45 P.M. in Qidong County, Jiangsu province, China. After detonations were heard, the meteoriteWork in progress. A solid natural object reaching a planet’s surface from interplanetary space. Solid portion of a meteoroid that survives its fall to Earth, or some other body. Meteorites are classified as stony meteorites, iron meteorites, and stony-iron meteorites. These groups are further divided according to their mineralogy and was found lying in a field. Qidong has a recrystallized texture but chondrulesRoughly spherical aggregate of coarse crystals formed from the rapid cooling and solidification of a melt at  ~1400 ° C. Large numbers of chondrules are found in all chondrites except for the CI group of carbonaceous chondrites. Chondrules are typically 0.5-2 mm in diameter and are usually composed of olivine are still obvious, consistent with a petrologic grade of 5. Shock features include extensive fracturing and undulose extinctionIn astronomy, the dimming of starlight as it passes through the interstellar medium. Dust scatters some of the light, causing the total intensity of the light to diminish. It is important to take this effect into account when measuring the apparent brightness of stars. The dark bands running across portions in silicates, with mosaisicm recognized in some olivines. Fine-grained troiliteBrass colored non-magnetic mineral of iron sulfide, FeS, found in a variety of meteorites./metal assemblages are abundant throughout. The vast majority of metalElement that readily forms cations and has metallic bonds; sometimes said to be similar to a cation in a cloud of electrons. The metals are one of the three groups of elements as distinguished by their ionization and bonding properties, along with the metalloids and nonmetals. A diagonal line drawn grains are taeniteLess common than kamacite, both taenite and kamacite are Ni-Fe alloys found in iron meteorites. Taenite, γ-(Fe,Ni), has 27-65 wt% Ni, and forms small crystals that appear as highly reflecting thin ribbons on the etched surface of a meteorite; the name derives from the Greek word for "ribbon.".

Qidong follows metal–silicateThe most abundant group of minerals in Earth's crust, the structure of silicates are dominated by the silica tetrahedron, SiO44-, with metal ions occurring between tetrahedra). The mesodesmic bonds of the silicon tetrahedron allow extensive polymerization and silicates are classified according to the amount of linking that occurs between the trends that are different from those of the recognized ordinary chondriteWork in Progress Ordinary chondrites (OCs) are the largest meteorite clan, comprising approximately 87% of the global collection and 78% of all falls (Meteoritical Society database 2018)1. Meteorites & the Early Solar System: page 581 section 6.1 OC of type 5 or 6 with an apparent shock stage of S1, groups. Evidence for a new intermediate L/LL-chondrite group is becoming well documented. The average olivineGroup of silicate minerals, (Mg,Fe)2SiO4, with the compositional endpoints of forsterite (Mg2SiO4) and fayalite (Fe2SiO4). Olivine is commonly found in all chondrites within both the matrix and chondrules, achondrites including most primitive achondrites and some evolved achondrites, in pallasites as large yellow-green crystals (brown when terrestrialized), in the silicate portion fayalitePure* iron end-member (Fe2SiO4) of the olivine solid solution series and an important mineral in meteorites. When iron (Fe) is completely substituted by magnesium, it yields the the pure Mg-olivine end-member, forsterite (Mg2SiO4). The various Fe and Mg substitutions between these two end-members are described based on their forsteritic (Fo) content of 25.7 mole% places Qidong at the extreme higher end of the L group (22.7–25.6 mole%), biased towards the LL group. Still, the Fa in one olivine studied was 28.4 mole%, within the range of the LL group. The average ferrosiliteA mineral that is composed of Fe-rich pyroxene, FeSiO3. It is the iron endmember of the pyroxene silicate mineral series – enstatite (MgSiO3) to ferrosilite (FeSiO3). content of 21.5 mole% is at the extreme higher end of the L group (18.7–21.8 mole%), also biased towards the LL group. Qidong has an FeNi-metal abundance of 4.7 wt% placing it at the extreme lower end of the L group (4.4–11.7 wt%) and in the middle of the LL group (3.0–6.0 wt%). Another classification parameter useful for distinguishing between the L and LL groups is the Co abundance (mg/g) in matrixFine grained primary and silicate-rich material in chondrites that surrounds chondrules, refractory inclusions (like CAIs), breccia clasts and other constituents. kamaciteMore common than taenite, both taenite and kamacite are Ni-Fe alloys found in iron meteorites. Kamacite, α-(Fe,Ni), contains 4-7.5 wt% Ni, and forms large body-centered cubic crystals that appear like broad bands or beam-like structures on the etched surface of a meteorite; its name is derived from the Greek word. An average of 15 mg/g was measured for Qidong, placing it at the extreme lower end of the LL range (15–110) and well outside that of the L range (6.7–8.2). It was demonstrated by Szurgot (2016) that the mean atomic weightMass of a neutral atom of a nuclide - also called "atomic weight." The atomic weight of an element is the weighted average of each isotope. (Amean) of meteorites can be used to resolve the OC groups, including the intermediate groups L/LL and H/L. Amean values can also be predicted through various equations based on other parameters such as atomic Fe/Si ratio, grain densityMass of an object divided by its volume. Density is a characteristic property of a substance (rock vs. ice, e.g.). Some substances (like gases) are easily compressible and have different densities depending on how much pressure is exerted upon them. The Sun is composed of compressible gases and is much, and magnetic susceptibility, and these Amean values all consistently resolve these groups into the ordered sequence LL < L/LL < L < H/L < H. Furthermore, it was demonstrated that Amean values are lower for unequilibrated type 3 samples than for equilibrated samples within each OC group due to the presence of water; Amean values for petrologic types 4–6 are indistinguishable within each group.

Diagram credit: M. Szurgot, 47th LPSC, #2180 (2016)
Amean based on chemical composition (Eq. 1), Fe/Si atomic ratio (Eq. 2), and grain density (Eq. 3) The discovery of several anomalous olivine and pyroxeneA class of silicate (SiO3) minerals that form a solid solution between iron and magnesium and can contain up to 50% calcium. Pyroxenes are important rock forming minerals and critical to understanding igneous processes. For more detailed information, please read the Pyroxene Group article found in the Meteoritics & Classification category. grains having abnormal Mg# suggests that Qidong is a fragmental brecciaWork in Progress ... A rock that is a mechanical mixture of different minerals and/or rock fragments (clasts). A breccia may also be distinguished by the origin of its clasts: (monomict breccia: monogenetic or monolithologic, and polymict breccia: polygenetic or polylithologic). The proportions of these fragments within the unbrecciated material. The various components of the breccia must have been mixed by a late impact event after the main period of metamorphism had ended. Final lithification was accomplished through subsequent smaller impact shock events. Although Qidong is published as a classification of L5, a growing body of evidence is leading to the conclusion that it is another member of an intermediate chondriteChondrites are the most common meteorites accounting for ~84% of falls. Chondrites are comprised mostly of Fe- and Mg-bearing silicate minerals (found in both chondrules and fine grained matrix), reduced Fe/Ni metal (found in various states like large blebs, small grains and/or even chondrule rims), and various refractory inclusions (such group. This group includes L/LL3 Esperance, L/LL4 Seemore Downs, Bjurböle, and Cynthiana, L/LL5/6 Sahara 97021, L/LL6 Acfer 041, and several others. A few meteorites are only partially resolved into the L/LL group, including L/LL3 Inman, L/LL5 Knyahinya, and L/LL6 Holbrook and Sultanpur. The main massLargest fragment of a meteorite, typically at the time of recovery. Meteorites are commonly cut, sliced or sometimes broken thus reducing the size of the main mass and the resulting largest specimen is called the "largest known mass". of Qidong is held at the Purple Mountain Observatory, Academia Sinica, in Nanjing, China. The Qidong specimen shown above weighs 2.16 g, and it was cut from a 35 g fragment purchased at the 2001 Macovich Meteorite Auction in Tucson.