Since pyroxenes found in nature or planetary settings rarely exceed 50 mol% Ca, the most useful part of the diagram is the “pyroxeneA class of silicate (SiO3) minerals that form a solid solution between iron and magnesium and can contain up to 50% calcium. Pyroxenes are important rock forming minerals and critical to understanding igneous processes. For more detailed information, please read the Pyroxene Group article found in the Meteoritics & Classification category. quadrilateral” where compositions are displayed in the lower half of the Mg2Si2O6   Fe2Si2O6   CaSiO3 ternary. Solid solutions are dominated by Ca2+, Fe2+ and Mg2+. Enstatite and ferrosilite form almost complete solid solutionCompositional variation resulting from the substitution of one ion or ionic compound for another ion or ionic compound in an isostructural material. This results in a mineral structure with specific atomic sites occupied by two or more ions or ionic groups in variable proportions. Solid solutions can be complete (with (Mg2+ substitutes for Fe2+ up to about 90 mol%). Ferrosillite is rarely found in nature, because under most geological conditions it breaks down: Fe2Si2O6 (ferrosilite) → Fe2SiO4 (fayalitePure* iron end-member (Fe2SiO4) of the olivine solid solution series and an important mineral in meteorites. When iron (Fe) is completely substituted by magnesium, it yields the the pure Mg-olivine end-member, forsterite (Mg2SiO4). The various Fe and Mg substitutions between these two end-members are described based on their forsteritic (Fo)) + SiO2 (quartzComposed of SiO2, quartz is one of the silica group minerals most common in Earth's crust, but never found in meteorites as inclusions visible to the naked eye. Quartz in meteorites has been found in very small quantities in eucrites, other calcium-rich achondrites, and in the highly reduced E chondrites1.).

Meteoriticists usually state the composition of pyroxene present in a meteoriteWork in progress. A solid natural object reaching a planet’s surface from interplanetary space. Solid portion of a meteoroid that survives its fall to Earth, or some other body. Meteorites are classified as stony meteorites, iron meteorites, and stony-iron meteorites. These groups are further divided according to their mineralogy and based on its ferrosilite content which corresponds to the percentage of iron in the pyroxene. So, Fe9.7 means the iron content in the pyroxene is 9.7%.

Pyroxenes are divided into two crystallographic groups: Orthorhombic pyroxene called orthopyroxeneOrthorhombic, low-Ca pyroxene common in chondrites. Its compositional range runs from all Mg-rich enstatite, MgSiO3 to Fe-rich ferrosilite, FeSiO3. These end-members form an almost complete solid solution where Mg2+ substitutes for Fe2+ up to about 90 mol. % and Ca substitutes no more than ~5 mol. % (higher Ca2+ contents occur (opx), and monoclinic pyroxene called clinopyroxene (cpx). Under certain conditions, pyroxenes can invert from a monoclinic crystal structureMutual arrangement of atoms, molecules or ions that are packed together in a crystal lattice to form a crystal. to an orthorhombic structure. For example, Mg-rich pigeonite that slowly cools from a high temperature will exsolve some of its calcium as augite lamellae thus lowering its calcium content and will then transform (invert) from monoclinic to an orthorhombic enstatite structure. When these augite lamellae are present, they indicate an igneous melt that cooled slowly.

Note that in the past, intermediate pyroxene compositions had individual names (e.g., hypersthene, bronzite), but modern nomenclature rulings have disallowed these. Now, general names are used with modifiers to indicate unusual attributes (e.g. chromian diopside and titian augite).

“Jadeite occurs as the shocked product of albite feldsparAn alumino-silicate mineral containing a solid solution of calcium, sodium and potassium. Over half the Earth’s crust is composed of feldspars and due to their abundance, feldspars are used in the classification of igneous rocks. A more complete explanation can be found on the feldspar group page. in shocked meteorites, and is one of the most common high-pressure polymorphs in shock-melt veins of meteorites. The characteristic textures of jadeite in shocked ordinary chondritesChondrites are the most common meteorites accounting for ~84% of falls. Chondrites are comprised mostly of Fe- and Mg-bearing silicate minerals (found in both chondrules and fine grained matrix), reduced Fe/Ni metal (found in various states like large blebs, small grains and/or even chondrule rims), and various refractory inclusions (such show that some of jadeite crystals were formed from originally albite feldspar by a solid state transformation and some were crystallized from a shock-induced albite melt” 1. Jadeite was discovered in the shock-melt veins of the Chelyabinsk meteorite 2.

Omphacite has been found as an accessory mineralConstituent mineral present in small quantity and not taken into account in identifying or classifying a rock.1   in the following meteorites:

Terrestrial pyroxenes are found in maficOne of the two broad categories of silicate minerals, the other being felsic, based on its magnesium (Mg) and/or iron (Fe) content. Mafic indicates silicate minerals that are predominantly comprised of Mg and/or Fe.The term is derived from those major constituents: Magnesium + Ferrum (Latin for iron) + ic (having and ultramaficTerm used for silicate minerals with cations predominantly Mg and/or Fe. Mafic minerals are dominated by plagioclase and pyroxene, and also contain smaller amounts of olivine. igneous rocks and high-temperature granulite facies metamorphicRocks that have recrystallized in a solid state due to changes in temperature, pressure, and chemical environment. rocks. The pyroxene, diopside also occurs in amphibolite facies calc-silicates and marbles; whereas, pigeonite is mainly restricted to meteorites and terrestrial volcanicIgneous rock that forms from cooling magma on the surface of a planet or asteroid. rocks. Na-rich pyroxenes occur in high pressure eclogite-facies metamorphism of mafic igneous rocks. Pyroxene transforms into a garnetMineral generally found in terrestrial metamorphic rocks, although igneous examples are not uncommon. Garnet is a significant reservoir of Al in the Earth's upper mantle. The garnet structure consists of isolated SiO4 tetrahedra bound to two cation sites. The A site holds relatively large divalent cations (Ca2+, Mg2+, Fe2+, Mn2+); the structure at high pressure to form majorite, (MgVIII)3(SiVI)2(SiIV)3O12; note that Si is octahedrally coordinated. This probably occurs at the transition zone (at ~400+ km depth). 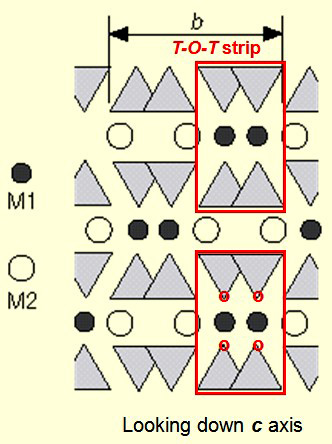 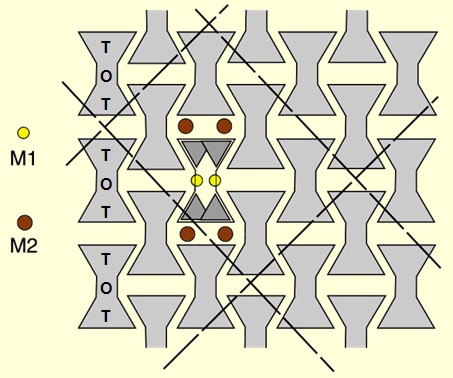