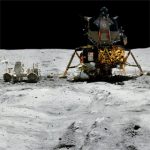 Achondrite meteorites from the surface of the Moon. Most were found in the hot deserts of northern Africa and Oman and others were found in the cold desert of Antarctica, although one, a 19-gram specimen, was recovered in 1990 from Calcalong Creek, Australia. These stones are of great importance because, in many cases, they provide specimens of the Moon from regions not visited by the manned Apollo or unmanned Russian sample-return missions. Most were blasted out of the lunar highlands rather than the low-lying maria, which served as the Apollo landing sites.

The lunar meteorites found so far, represent four distinct types of Moon rock and are categorized into groups LUN A (anorthositic highland breccias), LUN B (mare basalts), LUN G (gabbro), and LUN N (norite). One interesting specimen is a LUN B meteorite, found in Morocco in 2000, that crystallized from lava just 2.8 Ga ago and provides evidence for surprisingly recent lunar volcanism.

The only known LUN N meteorite, found in three pieces near Dchira in the Western Sahara and named NWA 773, is especially important because it represents a type of rock never sampled by the Luna or Apollo landing missions, but detected from orbit at several sites on the surface. The Aitken basin, a large impact structure near the lunar South Pole that is famous for its noritic composition and secondary impact craters, is a possible source of NWA 773. The large impact that excavated the Aitken basin removed the upper crust, exposing lower crustal layers that contain olivine-rich norites and gabbronorites.

All lunar meteorites can be considered mixtures of mare basalts and highlands rocks as shown by their bulk chemistries when plotted on a FeO vs. Al2O3 diagram.