H IMB (metallic melt brecciaWork in Progress ... A rock that is a mechanical mixture of different minerals and/or rock fragments (clasts). A breccia may also be distinguished by the origin of its clasts: (monomict breccia: monogenetic or monolithologic, and polymict breccia: polygenetic or polylithologic). The proportions of these fragments within the unbrecciated material)
(H6 in MetBull 83) 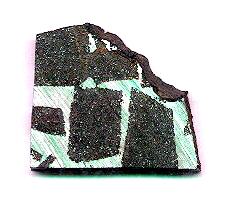 At 7:32 on a Saturday morning, accompanied by numerous sonic booms and smoke trails, a bright fireballA fireball is another term for a very bright meteor, generally brighter than magnitude -4, which is about the same magnitude of the planet Venus as seen in the morning or evening sky. A bolide is a special type of fireball which explodes in a bright terminal flash at its end, often with visible fragmentation. fragmented and produced a meteorite showerThe near simultaneous fall of numerous meteorites after the fragmentation of a single asteroid or large meteoroid in the atmosphere due to the immense frictional stresses encountered during atmospheric passage. A meteorite shower will produce a strewnfield that stretch for 10s if not even 100s of km. Some famous meteorite over eastern New Mexico. The meteoriteWork in progress. A solid natural object reaching a planet’s surface from interplanetary space. Solid portion of a meteoroid that survives its fall to Earth, or some other body. Meteorites are classified as stony meteorites, iron meteorites, and stony-iron meteorites. These groups are further divided according to their mineralogy and was observed by a Piper Cherokee pilot and his passengers as the meteorite fell toward Portales, New Mexico. At the same time, while having their morning coffee, Nelda Wallace and Fred Stafford heard loud explosions. They ran out onto the porch in time to witness a fragment land with a thud 100 yards away, kicking up a large cloud of dust. Within a craterBowl-like depression ("crater" means "cup" in Latin) on the surface of a planet, moon, or asteroid. Craters range in size from a few centimeters to over 1,000 km across, and are mostly caused by impact or by volcanic activity, though some are due to cryovolcanism. ten inches deep, they recovered a 16.5 kg, metal-veined fragment. In another case, a 530 g fragment penetrated the roof of Gayle Newberry’s barn and embedded itself in the north wall, verifying the meteorite’s southwest to northeast trajectory (on a course of ~62°). Remarkably, famed meteorite hunter Skip Wilson heard the sonic booms and witnessed the corkscrew-shaped contrail produced by the meteorite as it approached. He later recovered several specimens from the area. Approximately 51 fragments were recovered over several weeks ranging in weight from 12 g to 34 kg (see photos below), having a combined weight of over 100 kg. The fragments delimit a strewnfield 12 km-long by 2.5 km-wide, and contrary to normal fallMeteorite seen to fall. Such meteorites are usually collected soon after falling and are not affected by terrestrial weathering (Weathering = 0). Beginning in 2014 (date needs confirmation), the NomComm adopted the use of the terms "probable fall" and "confirmed fall" to provide better insight into the meteorite's history. If patterns, the largest fragments fell at the beginning of the strewnfield rather than at the end — a phenomenon similar to that of the Johnstown diogeniteDiogenites belong to the evolved achondrite HED group that also includes howardites and eucrites. They are named after the Greek philosopher Diogenes of Apollonia, of the 5th century BCE, who was the first to suggest that meteorites come from outer space (a realization forgotten for over 2,000 years). They are fall. This unusual pattern can be explained by a multiple breakup in which the largest fragment is disrupted late downrange. 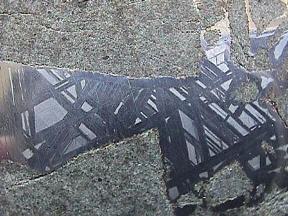 Close-up of etched metal
Photo courtesy of Michael Farmer—Mike’s Meteorites & Tektites The composite photo below shows an impressive 2,113 g etched complete slice, sectioned from the 34 kg main massLargest fragment of a meteorite, typically at the time of recovery. Meteorites are commonly cut, sliced or sometimes broken thus reducing the size of the main mass and the resulting largest specimen is called the "largest known mass"., which is shown both in situ and after cleaning. The slice is in the collection of Dr. J. Piatek, acquired from the R. A. Langheinrich Collection, previously obtained from the finder of the mass, Robert Woolard. 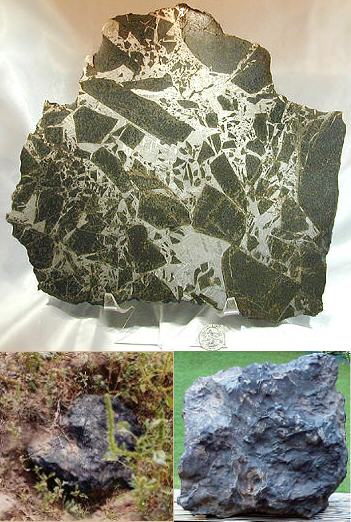