Iron, IIC, plessitic octahedriteMost Common type of iron meteorite, composed mainly of taenite and kamacite and named for the octahedral (eight-sided) shape of the kamacite crystals. When sliced, polished and etched with an acid such as nitric acid, they display a characteristic Widmanstätten pattern. Spaces between larger kamacite and taenite plates are often

Found August 1906
37° 44′ N., 89° 53′ W. An angular mass of 17.5 kg was found on the farm of Patrick Monaghan about one mile west of Perryville, Missouri. The mass was sticking out of the soil as if it had been previously disturbed by plowing. It has suffered from terrestrial weathering and lost an average of 1–2 mm from the surface, but still preserves sections of the heat-affected zone and retains evidence of ablationGradual removal of the successive surface layers of a material through various processes. • The gradual removal and loss of meteoritic material by heating and vaporization as the meteoroid experiences frictional melting during its passage through the atmosphere. The resulting plasma ablates the meteor and, in cases where a meteor pits.

A Ni content of ~9.6% creates a µm-sized Thomson (Widmanstätten) structure of fine-grained plessiteA fine-grained intergrowth of kamacite and taenite that fills in the wedges between wide kamacite and taenite bands in octahedrites. The name derives from the Greek word for "filling." composed of kamaciteMore common than taenite, both taenite and kamacite are Ni-Fe alloys found in iron meteorites. Kamacite, α-(Fe,Ni), contains 4-7.5 wt% Ni, and forms large body-centered cubic crystals that appear like broad bands or beam-like structures on the etched surface of a meteorite; its name is derived from the Greek word spindles having widths of ~0.06 mm and lengths up to ~0.9 mm, most all of them containing nuclei of schreibersiteNi-Fe phosphide mineral, (Fe,Ni)3P, yellowish in color and predominantly found in iron and stony-iron meteorites. Schreibersite can also be found in a variety of other meteorites including some acapulcoites, aubrites, enstatite chondrites and achondrites, lunars, ureilites, winonaites and a smattering of other meteorite types like CM, CO and CB. Schreibersite. Perryville was formed at an early-stage (~10%) of fractional crystallizationA crystallization process in which minerals crystallizing from a magma are isolated from contact with the liquid. It is a key process in the formation of igneous rocks during the process of magmatic differentiation. Also known as crystal fractionation. of an evolving liquid associated with coreIn the context of planetary formation, the core is the central region of a large differentiated asteroid, planet or moon and made up of denser materials than the surrounding mantle and crust. For example, the cores of the Earth, the terrestrial planets and differentiated asteroids are rich in metallic iron-nickel. formation (Tornabene et al., 2019). The iron began as a single taeniteLess common than kamacite, both taenite and kamacite are Ni-Fe alloys found in iron meteorites. Taenite, γ-(Fe,Ni), has 27-65 wt% Ni, and forms small crystals that appear as highly reflecting thin ribbons on the etched surface of a meteorite; the name derives from the Greek word for "ribbon." crystal that formed a progressively finer structure as it cooled. This uncommon plessitic structure is transitional between ataxites and finest octahedrites. The Re–Os age for the IIC group was determined by Tornabene et al. (2019) to be 4.538 (±0.140) b.y. Perryville is closely related to the other six irons constituting the IIC group: Ballinoo, Cratheús [1950], Darinskoe, Kumerina, Salt River, and Unter Mässing. The previously included iron Wiley has been eliminated on the basis of its HSE values and the relative enrichments in its 183W and 94/95/97Mo isotopes (Tornabene et al., 2018, 2019). The IIC irons are associated with the carbonaceous reservoir in the outer region of the Solar SystemThe Sun and set of objects orbiting around it including planets and their moons and rings, asteroids, comets, and meteoroids. (see diagram below). Ru vs. Mo Isotopes 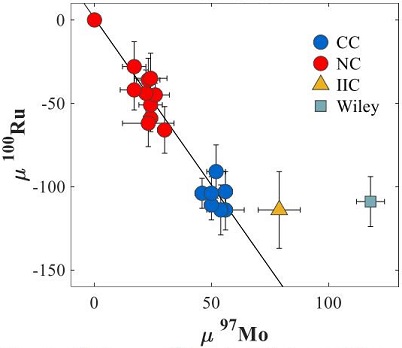 Diagram credit: Tornabene et al., 50th LPSC, #1236 (2019) To learn more about the relationship between this and other iron chemical groups, see Appendix III. The photo above shows a 11.5 g etched partial slice that displays kamacite spindles in a µm-sized Thomson (Widmanstätten) pattern. An ~1 mm shocked troiliteBrass colored non-magnetic mineral of iron sulfide, FeS, found in a variety of meteorites. nodule is visible on this slice. These 0.1–2 mm nodules generally occur every 25 cm², rarely attaining a size of up to 8 mm. The photo below is from the National Museum, showing the original mass.