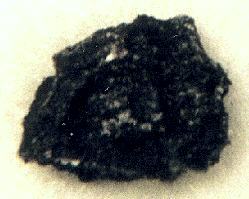 Fell May 14, 1864
43° 53′ N., 1° 23′ E. This very rare carbonaceous chondriteCarbonaceous chondrites represent the most primitive rock samples of our solar system. This rare (less than 5% of all meteorite falls) class of meteorites are a time capsule from the earliest days in the formation of our solar system. They are divided into the following compositional groups that, other than fell in France a few minutes after 8:00 P.M.. A luminous meteorHow long Sonic booms Of the several 10s of tons of cosmic material entering Earth's atmosphere each day, only about one ton reaches the surface. An object's chance of survival depends on its initial mass, speed and angle of entry, and friability (tendency to break up). Micrometeoroids radiate heat so and sonic booms were followed by the fallMeteorite seen to fall. Such meteorites are usually collected soon after falling and are not affected by terrestrial weathering (Weathering = 0). Beginning in 2014 (date needs confirmation), the NomComm adopted the use of the terms "probable fall" and "confirmed fall" to provide better insight into the meteorite's history. If of twenty stones; the largest stone was the size of a man’s head, but most were only fist-sized. The fall covered an area of over two miles², and the total recovered weight of this low-density meteoriteWork in progress. A solid natural object reaching a planet’s surface from interplanetary space. Solid portion of a meteoroid that survives its fall to Earth, or some other body. Meteorites are classified as stony meteorites, iron meteorites, and stony-iron meteorites. These groups are further divided according to their mineralogy and is ~13 kg. This is the most chemically primitive of the meteorite classes, with near-solar ratios of elemental abundances. However, volatileSubstances which have a tendency to enter the gas phase relatively easily (by evaporation, addition of heat, etc.). abundances may represent an enrichment that occurred during aqueous alteration processes, rather than a preservation of primitive solar abundancesAmount of elements in the Sun as determined by spectral line intensities. Approximately 60 elements have been identified; the most abundant are listed in the table.. 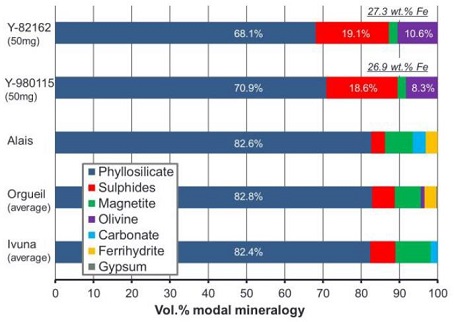 Diagram credit: King et al., National Institute of Polar Research, Fifth Symposium on Polar Science – Antarctic meteorites (2014) X-ray diffraction techniques and Mössbauer spectroscopy have been used by Bland et al. (2004) to determine the modal mineralogy of several carbonaceous chondrites including Orgueil. They were also able to quantify the compositional range of the olivine phases. In addition, the grain densityMass of an object divided by its volume. Density is a characteristic property of a substance (rock vs. ice, e.g.). Some substances (like gases) are easily compressible and have different densities depending on how much pressure is exerted upon them. The Sun is composed of compressible gases and is much can be readily estimated from the mode data, and therefore, in combination with the calculated bulk density, the porosityThe volume percentage of a rock that consists of void space. Vesicular porosity is a type of porosity resulting from the presence of vesicles, or gas bubbles, in igneous rock such as the pumice presented here. Vesicular porosity is very rare in meteorites and is often associated with slag, one can be determined. The modal mineralogy (vol%) of Orgueil is as follows:

The composition for Orgueil (along with Ivuna and Alais) was also determined by King et al. (2015) utilizing X-ray diffraction. They found the average modal composition of Orgueil to be 83% phyllosilicate (serpentine/saponite), 6.7% magnetite, 5.7% sulfide, 3.3% ferrihydrite, 1% olivine, and 0.3% gypsum (of probable terrestrial origin), and that it may also contain <1% dolomite. 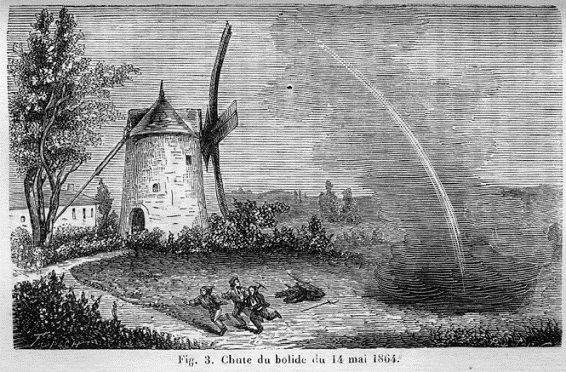