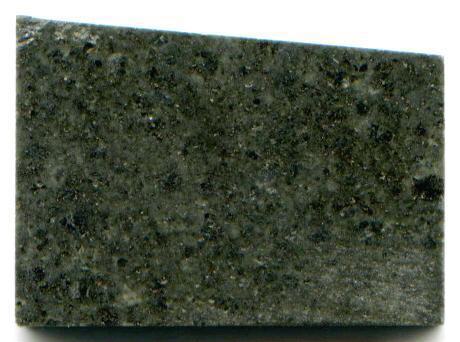 Found 2005
coordinates not recorded A large 23.62 kg stone covered by a thin, translucent, olive-gray crustOutermost layer of a differentiated planet, asteroid or moon, usually consisting of silicate rock and extending no more than 10s of km from the surface. The term is also applied to icy bodies, in which case it is composed of ices, frozen gases, and accumulated meteoritic material. On Earth, the, and not considered to be a meteoriteWork in progress. A solid natural object reaching a planet’s surface from interplanetary space. Solid portion of a meteoroid that survives its fall to Earth, or some other body. Meteorites are classified as stony meteorites, iron meteorites, and stony-iron meteorites. These groups are further divided according to their mineralogy and, was gifted by a meteorite collector to T. Stout. In June 2012, a portion was sent to Cascadia Meteorite Laboratory in Oregon (A. Ruzicka and M. Hutson) for analysis, and it was determined that the stone was a meteorite after all—the largest R5 chondriteChondrites are the most common meteorites accounting for ~84% of falls. Chondrites are comprised mostly of Fe- and Mg-bearing silicate minerals (found in both chondrules and fine grained matrix), reduced Fe/Ni metal (found in various states like large blebs, small grains and/or even chondrule rims), and various refractory inclusions (such known, designated NWA 7514.

The interior of this fresh R chondrite appears homogeneous and somewhat featureless in hand section, with an overall gray color. In thin sectionThin slice or rock, usually 30 µm thick. Thin sections are used to study rocks with a petrographic microscope., chondrulesRoughly spherical aggregate of coarse crystals formed from the rapid cooling and solidification of a melt at  ~1400 ° C. Large numbers of chondrules are found in all chondrites except for the CI group of carbonaceous chondrites. Chondrules are typically 0.5-2 mm in diameter and are usually composed of olivine are evident but indistinct, embedded in a transparent matrixFine grained primary and silicate-rich material in chondrites that surrounds chondrules, refractory inclusions (like CAIs), breccia clasts and other constituents.. Features are consistent with a shock stageA petrographic assessment, using features observed in minerals grains, of the degree to which a meteorite has undergone shock metamorphism. The highest stage observed in 25% of the indicator grains is used to determine the stage. Also called "shock level".               in the range of S2–S4, and the meteorite is virtually unweathered, reflecting the weathering index (wi) value of 0 (Rubin and Huber, 2005). In contrast to some R chondritesChondrites are the most common meteorites accounting for ~84% of falls. Chondrites are comprised mostly of Fe- and Mg-bearing silicate minerals (found in both chondrules and fine grained matrix), reduced Fe/Ni metal (found in various states like large blebs, small grains and/or even chondrule rims), and various refractory inclusions (such which have experienced significant aqueous alteration of their sulfide minerals (mainly pyrrhotiteIron sulfide group of minerals whose composition ranges widely between its end members pyrrhotite (Fe7S8) whose crystal structure is monoclinic, and troilite (FeS) whose crystal structure is hexagonal. Its general formula is Fe1−xS (where x = 0 to 0.17). The troilite phase is found mainly in meteorites and in the and pentlanditeFe-Ni sulfide, (Fe,Ni)9S8, that is often associated with troilite, and found in the matrix and chondrules of CO, CV, CK and CR chondrites. The color is yellow-bronze with light bronze-brown streak and metallic luster. It typically forms during cooling of magmatic sulfide melts during the evolution of parent silicate melt. The) and contain abundant hydrous phases and brown staining (e.g., amphibole, phlogopite, and apatite in LAP 04840 and MIL 11207; Gross et al., 2013, 2017), the sulfides in NWA 7514 are virtually unaltered, reflecting a formation in dry conditions and a lack of terrestrial aqueous alteration (Ruzicka et al., 2013). An oxygen three-isotope diagram was prepared from values determined at The Open University, United Kingdom (R. Greenwood), and the plot falls within the Rumuruti-chondrite field. The R-chondrite group is considered to be one of the most oxidizedOxidation and reduction together are called redox (reduction and oxidation) and generally characterized by the transfer of electrons between chemical species, like molecules, atoms or ions, where one species undergoes oxidation, a loss of electrons,  while another species undergoes reduction, a gain of electrons. This transfer of electrons between reactants groups of meteorites, and NWA 7514 has the highest Δ17O value of any R chondrite measured to date. The specimen of NWA 7514 shown above is a 0.73 g partial slice. The photo below shows the unusual and awesome main massLargest fragment of a meteorite, typically at the time of recovery. Meteorites are commonly cut, sliced or sometimes broken thus reducing the size of the main mass and the resulting largest specimen is called the "largest known mass".. 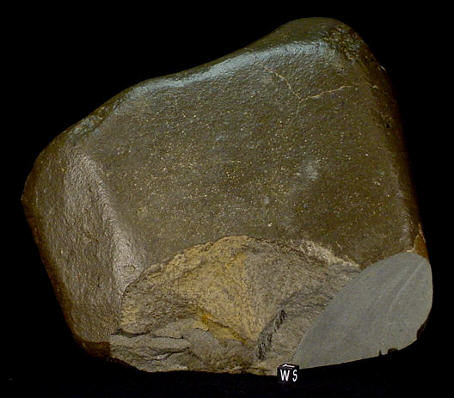