AchondriteAn achondrite is a type of stony meteorite whose precursor was of chondritic origin and experienced metamorphic and igneous processes. They have a planetary or differentiated asteroidal origin where the chondritic parent body reached a sufficient size that through heating due to radioactive decay of 26Al (aluminum isotope) and gravitational, ungroupedModifying term used to describe meteorites that are mineralogically and/or chemically unique and defy classification into the group or sub-group they most closely resemble. Some examples include Ungrouped Achondrite (achondrite-ung), Ungrouped Chondrite (chondrite-ung), Ungrouped Iron (iron-ung), and Ungrouped Carbonaceous (C-ung). 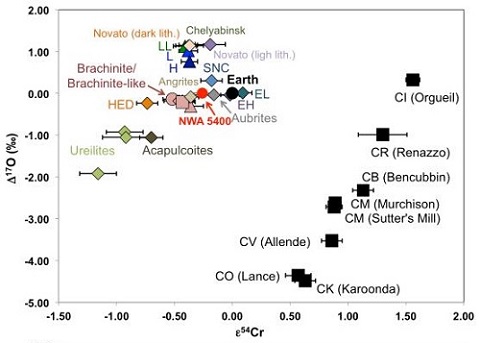 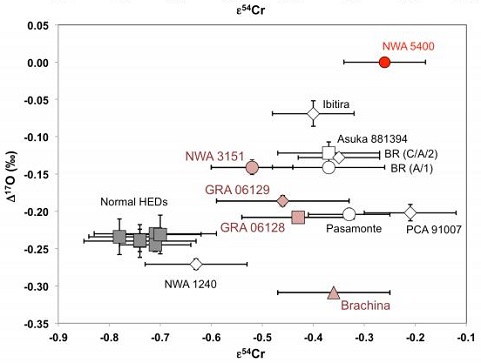 Diagram credit: Sanborn et al., 47th LPSC, #2309 (2016) Burkhardt et al. (2015, 2017 [http://dx.doi.org/10.1111/maps.12834]) have conducted in-depth petrographic, geochemical, and isotopic (O, Cr, Ca, Ti, Ni, Mo, Ru and Nd) analyses for the paired meteorites NWA 5363 and 5400. Results of their studies indicate that while NWA 5363/5400 has Δ17O values indistinguishable from Earth, other isotopic anomalies (ε54Cr, ε48Ca, ε50Ti, ε92Ni, ε92Mo, ε100Ru, ε145Nd) show significant differences from the Earth. The isotopic anomalies together with the chronological and petrographic data demonstrate that this meteorite does not represent precursor material of Earth, early impact ejectaFractured and/or molten rocky debris thrown out of a crater during a meteorite impact event, or, alternatively, material, including ash, lapilli, and bombs, erupted from a volcano. from Earth, or remnants from ‘Theia’. Instead, Burkhardt et al. (2017) concluded that its parent body was a relatively small asteroid that originated in a unique nebulaAn immense interstellar, diffuse cloud of gas and dust from which a central star and surrounding planets and planetesimals condense and accrete. The properties of nebulae vary enormously and depend on their composition as well as the environment in which they are situated. Emission nebula are powered by young, massive isotopic reservoir most similar to enstatiteA mineral that is composed of Mg-rich pyroxene, MgSiO3. It is the magnesium endmember of the pyroxene silicate mineral series - enstatite (MgSiO3) to ferrosilite (FeSiO3). and ordinary chondrites, and that it experienced a petrogenetic history similar to brachinites. It is interesting to note that, with the exception of ε48Ca (no angriteType of evolved achondrite meteorite that represent some of the earliest stages of asteroidal differentiation and magmatism in our solar system. Angrites are named for the Angra dos Reis meteorite, which fell in Rio de Janeiro, Brazil, in early 1869. They are basaltic (mafic) rocks, often containing porous areas, and data for ε100Ru), NWA 5363/5400 and angrites have values for each of these isotopic anomalies which are nearly the same or overlap within uncertainties. In another study, Amelin and Irving (2011) proposed that NWA 5400 originated from a parent body associated with one of the iron meteoriteMeteorite composed mainly of iron (Fe) and nickel (Ni) in the form of two alloys, kamacite and taenite. Due to their metallic makeup and extraordinary weight, iron meteorites are easily distinguished from ordinary rocks. Also, because they rarely break up in the air and suffer much less from the effects groups containing primitive Pb. The CRE age based on 3He and 21Ne was determined to be ~29 m.y. The specimen of NWA 5400 shown above is a 5.3 g partial slice. Shown below is a composite image of both sides of the complete mass as found.