Winonaitea partially differentiated asteroid that was disrupted just as it began to form an Fe core and a silicate-rich crust. This disrupting impact mixed silicates into molten Ni-Fe metal forming the silicated IAB irons, and mixed olivine-rich residues of partial melts into unmelted silicates, forming the winonaites. A few winonaites (primitive)*
(‘W Chondrite’) 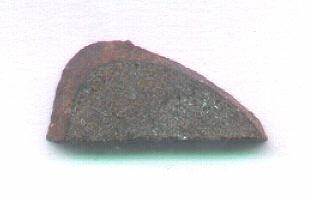 Found November 2000
no coordinates recorded A small meteoriteWork in progress. A solid natural object reaching a planet’s surface from interplanetary space. Solid portion of a meteoroid that survives its fall to Earth, or some other body. Meteorites are classified as stony meteorites, iron meteorites, and stony-iron meteorites. These groups are further divided according to their mineralogy and weighing only 68 g was purchased in the Moroccan market by a group of American collectors. The meteorite was classified at UCLA (A. Rubin) as a winonaite similar to the anomalous winonaite, Pontlyfni, the only winonaite witnessed fallMeteorite seen to fall. Such meteorites are usually collected soon after falling and are not affected by terrestrial weathering (Weathering = 0). Beginning in 2014 (date needs confirmation), the NomComm adopted the use of the terms "probable fall" and "confirmed fall" to provide better insight into the meteorite's history. If. Pontlyfni is a fine-grained, reducedOxidation and reduction together are called redox (reduction and oxidation) and generally characterized by the transfer of electrons between chemical species, like molecules, atoms or ions, where one species undergoes oxidation, a loss of electrons,  while another species undergoes reduction, a gain of electrons. This transfer of electrons between reactants, brecciated rock containing silicateThe most abundant group of minerals in Earth's crust, the structure of silicates are dominated by the silica tetrahedron, SiO44-, with metal ions occurring between tetrahedra). The mesodesmic bonds of the silicon tetrahedron allow extensive polymerization and silicates are classified according to the amount of linking that occurs between the clasts (48.3 vol%) in a heterogeneous FeNi-metal- and troilite-rich (51.7 vol%) matrixFine grained primary and silicate-rich material in chondrites that surrounds chondrules, refractory inclusions (like CAIs), breccia clasts and other constituents. in a similar manner to some IAB complex irons (Hunt et al., 2011). A third winonaite from Antarctica, Y-74025, has also been shown to be very similar to Pontlyfni (Kallemeyn, 1997). Northwest Africa 516 has a shock stageA petrographic assessment, using features observed in minerals grains, of the degree to which a meteorite has undergone shock metamorphism. The highest stage observed in 25% of the indicator grains is used to determine the stage. Also called "shock level".               of S2 and a weathering grade of W3.

A similar distinction could be made among the winonaites in our collections, although there is not yet an analog of the IAB complex irons for the acapulcoite/lodranite PB. Northwest Africa 1463 (and pairing group) ranks as the most primitive member of the winonaites, containing intact chondrulesRoughly spherical aggregate of coarse crystals formed from the rapid cooling and solidification of a melt at  ~1400 ° C. Large numbers of chondrules are found in all chondrites except for the CI group of carbonaceous chondrites. Chondrules are typically 0.5-2 mm in diameter and are usually composed of olivine comparable to a petrologic typeMeasure of the degree of aqueous alteration (Types 1 and 2) and thermal metamorphism (Types 3-6) experienced by a chondritic meteorite. Type 3 chondrites are further subdivided into 3.0 through 3.9 subtypes. 5 chondriteChondrites are the most common meteorites accounting for ~84% of falls. Chondrites are comprised mostly of Fe- and Mg-bearing silicate minerals (found in both chondrules and fine grained matrix), reduced Fe/Ni metal (found in various states like large blebs, small grains and/or even chondrule rims), and various refractory inclusions (such (Benedix et al., 2003). However, most winonaites experienced extensive thermal metamorphism involving incipient sulfide melting and exhibit highly recrystallized textures, characteristics analogous to the ‘typical’ acapulcoites. Metamorphic progression in other winonaites led to partial loss of the low-melting phases FeS and plagioclase, and these are designated as a ‘transitional’ stage in the acapulcoite/lodranite metamorphic continuum. Those winonaites which experienced the highest temperatures ultimately crystallized from residual melt material, and they exhibit significant depletions in FeS, FeNi-metal, and plagioclase (including plagiophile trace elements). Samples representing this advanced metamorphic stage are known as lodranites in the acapulcoite/lodranite metamorphic sequence, while the term ‘evolved’ could be used to represent a similar metamorphic stage in the winonaite group (e.g., Tierra Blanca; Hunt et al., 2017). Northwest Africa 516, Pontlyfni, and Y-74025 differ from most other winonaites in having a finer-grained, less equilibrated texture. Notably, not only has Pontlyfni been found to contain relict porphyritic and radiating-pyroxene chondrules, but it has also been interpreted as a petrologic type 6 chondrite by several investigators. By contrast, most other winonaites have coarse-grained, highly recrystallized achondritic textures. The Antarctic winonaite QUE 94535 is transitional in texture to Pontlyfni and the recrystallized Winona. 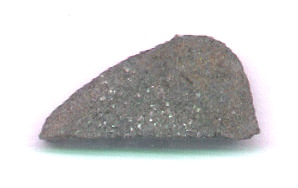