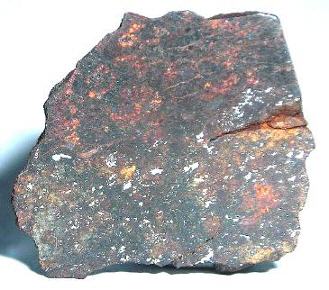 Purchased before 2006
no coordinates recorded Five paired stones having a combined weight of 711.6 g were found in Northwest Africa and sold in Erfoud, Morocco to meteoriteWork in progress. A solid natural object reaching a planet’s surface from interplanetary space. Solid portion of a meteoroid that survives its fall to Earth, or some other body. Meteorites are classified as stony meteorites, iron meteorites, and stony-iron meteorites. These groups are further divided according to their mineralogy and collector C. Anger of Austromet. Samples of each stone were submitted for analysis and classification to the Museum für Naturkunde (A. Greshake and M. Kurz), and a NWA-series designation of 4152 through 4156 was assigned to the members of the pairing group. Northwest Africa 4152–4156 was determined to have anomalous silicateThe most abundant group of minerals in Earth's crust, the structure of silicates are dominated by the silica tetrahedron, SiO44-, with metal ions occurring between tetrahedra). The mesodesmic bonds of the silicon tetrahedron allow extensive polymerization and silicates are classified according to the amount of linking that occurs between the ranges; the average Fa value of 20.4 is consistent with the H chondriteOrdinary chondrites with a high content of free Ni-Fe metal (15-19 vol. %) and attracted easily to a magnet. Their main minerals are olivine (Fa16-20) and the orthopyroxene bronzite (Fs14.5-18.5), earning them their older name of bronzite chondrites. Chondrules average ~0.3 mm in diameter. Comparison of the reflectance spectra of group, while the average Fs value of 20.4 is consistent with the L chondriteOrdinary chondrites low in free Ni-Fe metal (4 to 10 vol. %), containing olivine (Fa22-26) and the orthopyroxene hypersthene (Fs19-22). Average chondrule diameters (0.7 mm) are larger than those in H chondrites. The asteroid 433 Eros is suspected as a parent body, based on reflectance spectra, but most L chondrites group. Therefore, it was determined that this pairing group belongs to the transitional H/L chondriteChondrites are the most common meteorites accounting for ~84% of falls. Chondrites are comprised mostly of Fe- and Mg-bearing silicate minerals (found in both chondrules and fine grained matrix), reduced Fe/Ni metal (found in various states like large blebs, small grains and/or even chondrule rims), and various refractory inclusions (such group.

The H/L chondrite group comprises a couple of dozen members, of which some or all might represent a distinct ordinary chondriteWork in Progress Ordinary chondrites (OCs) are the largest meteorite clan, comprising approximately 87% of the global collection and 78% of all falls (Meteoritical Society database 2018)1. Meteorites & the Early Solar System: page 581 section 6.1 OC of type 5 or 6 with an apparent shock stage of S1, parent bodyThe body from which a meteorite or meteoroid was derived prior to its ejection. Some parent bodies were destroyed early in the formation of our Solar System, while others like the asteroid 4-Vesta and Mars are still observable today.. Northwest Africa 4152–4156 is either a representative of this distinct parent body, or alternatively, the anomalous silicate values may indicate that the Fa and Fs ranges for the H and/or L chondrite groups need to be extended. The potential identification of further chemical and petrographic characteristics inconsistent with the known H and L chondritesChondrites are the most common meteorites accounting for ~84% of falls. Chondrites are comprised mostly of Fe- and Mg-bearing silicate minerals (found in both chondrules and fine grained matrix), reduced Fe/Ni metal (found in various states like large blebs, small grains and/or even chondrule rims), and various refractory inclusions (such would help provide a definitive assignment.

H/L chondrite ranges derived from published values for equilibrated H/L members. The petrographic features of this meteorite were determined to be consistent with type 6, which is a very rare type for this transitional group shared by only seven other members. The five meteorites composing the 4152–4156 pairing group have shock stages in the range of S3–S4 and weathering grades in the range of W2–W4. The photo shown above is a 3.31 g partial slice acquired from Christian Anger which was cut from the 165 g NWA 4156 stone. Thank you dearly departed friend.