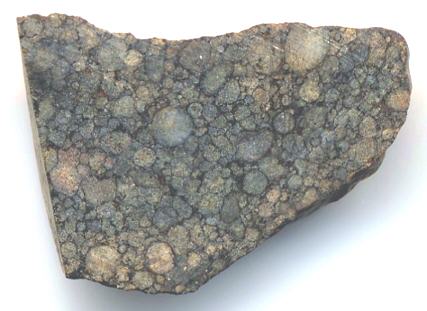 Found 2005
no coordinates recorded Ten pieces constituting a single stone with a combined weight of 209.4 g was found by an anonymous hunter and later sold in Morocco to collector H. Strufe. A portion was submitted for analysis to the Museum für Naturkunde, Berlin, Germany (A. Greshake and M. Kurz). Northwest Africa 4020 was classified as an L/LL3, a transitional unequilibrated ordinary chondriteWork in Progress Ordinary chondrites (OCs) are the largest meteorite clan, comprising approximately 87% of the global collection and 78% of all falls (Meteoritical Society database 2018)1. Meteorites & the Early Solar System: page 581 section 6.1 OC of type 5 or 6 with an apparent shock stage of S1,. This meteoriteWork in progress. A solid natural object reaching a planet’s surface from interplanetary space. Solid portion of a meteoroid that survives its fall to Earth, or some other body. Meteorites are classified as stony meteorites, iron meteorites, and stony-iron meteorites. These groups are further divided according to their mineralogy and has been weakly to moderately shocked (S3/4), and has experienced heavy terrestrial oxidationOxidation and reduction together are called redox (reduction and oxidation) and generally characterized by the transfer of electrons between chemical species, like molecules, atoms or ions, where one species undergoes oxidation, a loss of electrons,  while another species undergoes reduction, a gain of electrons. This transfer of electrons between reactants (W3).

Diagram credit: M. Szurgot, 47th LPSC, #2180 (2016)
Amean based on chemical composition (Eq. 1), Fe/Si atomic ratio (Eq. 2), and grain density (Eq. 3) A brief review of the evidence supporting a separate L/LL parent bodyThe body from which a meteorite or meteoroid was derived prior to its ejection. Some parent bodies were destroyed early in the formation of our Solar System, while others like the asteroid 4-Vesta and Mars are still observable today. can be found on the Inman page. The specimen of NWA 4020 shown above is a 1.4 g partial end section.