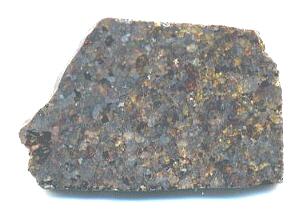 Purchased April 2005
no coordinates recorded A single fusion-crusted stone weighing 1,500 g was found in Morocco or Algeria. The meteoriteWork in progress. A solid natural object reaching a planet’s surface from interplanetary space. Solid portion of a meteoroid that survives its fall to Earth, or some other body. Meteorites are classified as stony meteorites, iron meteorites, and stony-iron meteorites. These groups are further divided according to their mineralogy and was subsequently purchased by G. Hupé while visiting in Morocco. A type specimen was submitted for analysis to the University of Washington in Seattle (A. Irving and S. Kuehner), and NWA 3151 was classified as a brachinite, the largest member of the group found to date. A separate 26.5 g stone, NWA 5191, has been determined to be a possible pairing to NWA 3151 (A. Ibhi, LPMM, and M. vanGinneken and L. Folco, MNA-SI).

click on image for a magnified view Diagram credit: Beard et al., 81st MetSoc, #6170 (2018) Although the brachinite parent body still comprises a relatively small number of representative samples in our collections, a significant number of new samples have recently been found in Northwest Africa, some of which may eventually be determined to be paired. Despite the fact that the Austalian brachinite Reid 027 was found in close proximity to Reid 013 (a portion of which is classified under the synonyms NovaStar that, over a period of a few days, becomes 103 to 104 times brighter than it was previously. Novae are observed about 10-15 times per year in the Milky Way. 003 and Window Butte) establishing a definite likelihood for their pairing, the two brachinites exhibit differences in both grain size and plagioclase composition; for some investigators, these variations support the decision to maintain their independent status until more thorough comparisons can be made. Further details about this meteorite group can be found on the other brachinite member pages on this website. The specimen of NWA 3151 shown above is a 0.498 g thin partial slice. The photo below shows the complete uncut mass, and the bottom image is an excellent petrographic thin sectionThin slice or rock, usually 30 µm thick. Thin sections are used to study rocks with a petrographic microscope. micrograph of NWA 3151, shown courtesy of Peter Marmet. 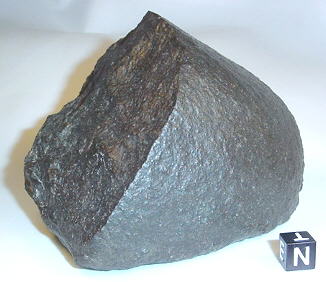 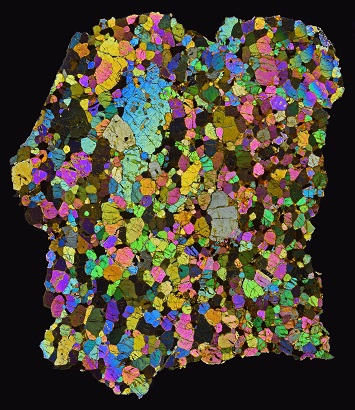