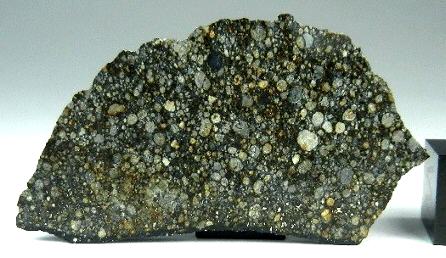 Purchased 2005
no coordinates recorded A single unequilibrated chondriteA chondrite with heterogeneous mineral compositions (e.g., olivine grains with differing FeO/(FeO+MgO) ratios. weighing 1,211 g was found in the Sahara Desert and sold to G. Hupé in Erfoud, Morocco. This chondriteChondrites are the most common meteorites accounting for ~84% of falls. Chondrites are comprised mostly of Fe- and Mg-bearing silicate minerals (found in both chondrules and fine grained matrix), reduced Fe/Ni metal (found in various states like large blebs, small grains and/or even chondrule rims), and various refractory inclusions (such was analyzed and classified at Northern Arizona University (J. Wittke and T. Bunch) and was assigned to subtype L3.8.

In their modeling of the accretionAccumulation of smaller objects into progressively larger bodies in the solar nebula leading to the eventual formation of asteroids, planetesimals and planets. The earliest accretion of the smallest particles was due to Van der Waals and electromagnetic forces. Further accretion continued by relatively low-velocity collisions of smaller bodies in the and impact history of ordinary chondritesChondrites are the most common meteorites accounting for ~84% of falls. Chondrites are comprised mostly of Fe- and Mg-bearing silicate minerals (found in both chondrules and fine grained matrix), reduced Fe/Ni metal (found in various states like large blebs, small grains and/or even chondrule rims), and various refractory inclusions (such, Blackburn et al. (2017) calculated the timing of the catastrophic disruption of the H- and L-chondrite parent bodies to be ~60 m.y. after CAIsSub-millimeter to centimeter-sized amorphous objects found typically in carbonaceous chondrites and ranging in color from white to greyish white and even light pink. CAIs have occasionally been found in ordinary chondrites, such as the L3.00 chondrite, NWA 8276 (Sara Russell, 2016). CAIs are also known as refractory inclusions since they. This timing is consistent with two competing dating techniques—U–Pb (and Hf–W) chronometry and metallographic cooling rates (Ni diffusionMovement of particles from higher chemical potential to lower chemical potential (chemical potential can in most cases of diffusion be represented by a change in concentration). Diffusion, the spontaneous spreading of matter (particles), heat, or momentum, is one type of transport phenomena. Because diffusion is thermally activated, coefficients for diffusion profiles in Fe-metal)—which record cooling associated with both an onion shell structure prior to disruption and a rubble pile after disruption, respectively. Utilizing Pb–phosphate age data, Edwards et al. (2017) determined that the H and L chondrites of petrologic typeMeasure of the degree of aqueous alteration (Types 1 and 2) and thermal metamorphism (Types 3-6) experienced by a chondritic meteorite. Type 3 chondrites are further subdivided into 3.0 through 3.9 subtypes. 6 (i.e., those located at the greatest depths in a concentrically zoned body) show a similar timing for closure of the Pb-phosphate systemDefinable part of the universe that can be open, closed, or isolated. An open system exchanges both matter and energy with its surroundings. A closed system can only exchange energy with its surroundings; it has walls through which heat can pass. An isolated system cannot exchange energy or matter with of ~60 m.y. after CAIs; this age reflects the occurrence of ubiquitous quenching during parent bodyThe body from which a meteorite or meteoroid was derived prior to its ejection. Some parent bodies were destroyed early in the formation of our Solar System, while others like the asteroid 4-Vesta and Mars are still observable today. disruption. Employing thermal models, they constrained the timing of accretion for the two parent bodies to 2.0–2.35 m.y. after CAIs, and they derived an estimate for the minimum size of the two parent bodies of ~275 km in diameter. Northwest Africa 2797 has a shock stageA petrographic assessment, using features observed in minerals grains, of the degree to which a meteorite has undergone shock metamorphism. The highest stage observed in 25% of the indicator grains is used to determine the stage. Also called "shock level".               of S2 and a weathering grade of W2. The specimen shown above is a 3.2 g partial slice.