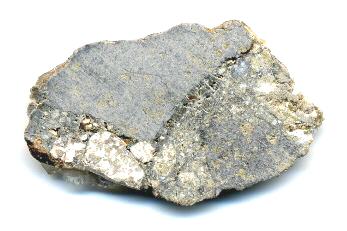 click on photo for a magnified view
Purchased November 2004
no coordinates reported A stone weighing 26 g was purchased from a dealer in Morocco by N. Oakes. A portion was submitted for classification to Northern Arizona University (T. Bunch and J. Wittke). All together, four stones (11.6, 30.6, 64, and 85 g) having a combined weight of 191.2 g were classified under the NWA 2727 designation. Numerous additional stones (or parts thereof) were classified under different NWA-series designations by different labs (e.g., NWA 3160 and NWA 3333; see following photos). All of these similar stones are considered to be a pairing group, and all are also thought to belong to the previously recognized three-member pairing group composed of NWA 773, NWA 2700, and NWA 2977. Consistent with this finding, cosmogenic nuclideA nuclear species characterized by Z protons and N neutrons. studies conducted on NWA 3160 indicate that it is likely paired with NWA 773 (Nishiizumi and Caffee, 2006). Additional paired stones have been recovered and more information and photos of this lunar pairing group can be found on the website of Randy L. Korotev–WUSL. 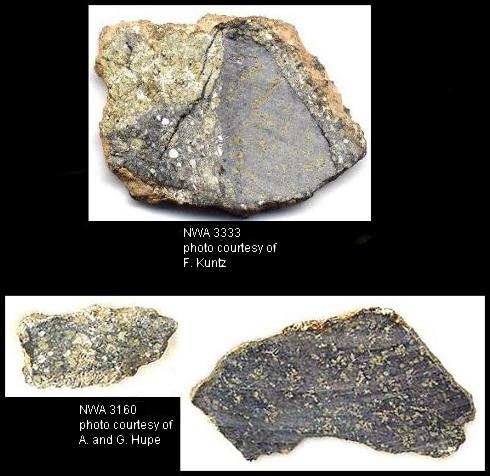 Schematic History of Moganite Precipitation on the Moon 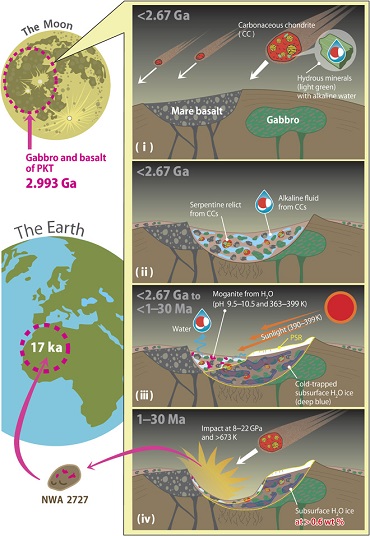 Diagram credit: Kayama et al., Science Advances, vol. 4, #5, eaar4378 (2 May 2018, open access link)
‘Discovery of moganite in a lunar meteorite as a trace of H2O ice in the Moon’s regolith’
(https://doi.org/10.1126/sciadv.aar4378) It is generally accepted that the Moon was formed from the debris that resulted from a collision between Earth and a smaller body named ‘Theia’, which created an all-encompassing magma oceanCompletely molten surfaces of terrestrial planets or moons that formed soon after accretion. Samples returned by the Apollo missions provide evidence of a lunar magma ocean, crystallization of which produced a stratified Moon with a low-density crust formed by accumulation of the mineral plagioclase overlying a higher density mantle of. It was calculated from isotopic data that the earliest time this event could have occurred is 4.517 b.y. ago (Nemchin et al., 2009), or 30–110 m.y. after the beginning of the Solar SystemThe Sun and set of objects orbiting around it including planets and their moons and rings, asteroids, comets, and meteoroids. (Yin et al., 2002; Kleine et al., 2005). Based on Pb–Pb dating of zirconOrthosilicate mineral, Zr(SiO4), observed in all terrestrial rocks type and in ordinary chondrites, eucrites, mesosiderites, and lunar rocks. crystals, which is a late crystallization product derived from the last dregs of the lunar magma ocean, Nemchin et al. (2009) determined that crystallization of the lunar magma ocean was complete by 4.417 (±0.006) b.y. ago, thus establishing the timeframe for the solidification of the lunar magma ocean at 100 m.y. They also reasoned that formation of an anorthositeA phaneritic, intrusive igneous rock made with a modal composition (i.e. volume%) > 90% plagioclase feldspar of undefined composition (anorthitic to albitic, or combination thereof), and a small mafic component between 0 - 10% such as pyroxene, ilmenite, magnetite, and olivine 1. The name anorthosite is derived from the calcium-rich crustOutermost layer of a differentiated planet, asteroid or moon, usually consisting of silicate rock and extending no more than 10s of km from the surface. The term is also applied to icy bodies, in which case it is composed of ices, frozen gases, and accumulated meteoritic material. On Earth, the could not begin until 80–85% of the magma ocean had crystallized, which would allow relatively rapid cooling over a time interval of ~50 m.y. The final 25% of crystallization would have taken place under an insulating anorthosite crust over a similar time interval of ~50 m.y. A transmitted light view of a petrographic thin sectionThin slice or rock, usually 30 µm thick. Thin sections are used to study rocks with a petrographic microscope. of NWA 2727 can be seen on John Kashuba’s page. The photo of NWA 2727 shown above is a 2.0 g slice sectioned from the original 30.6 g stone. The specimen consists of porphyritic olivine basalt clasts of varying grain size, clasts of ferroan olivine gabbro cumulate, and a regolith breccia component, each sintered into a composite rock by shock-melt veins. The photo below shows the outside appearance of the 30.6 g parent stone. 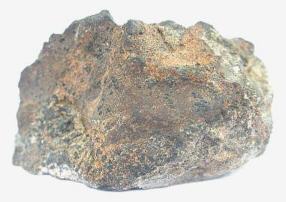