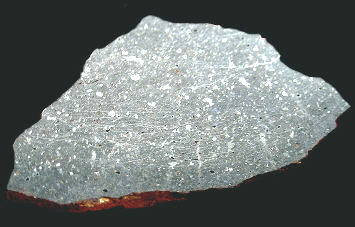 Found 2004
no coordinates recorded A large fragmented stone weighing 4,085 g was found in Morocco during the FallMeteorite seen to fall. Such meteorites are usually collected soon after falling and are not affected by terrestrial weathering (Weathering = 0). Beginning in 2014 (date needs confirmation), the NomComm adopted the use of the terms "probable fall" and "confirmed fall" to provide better insight into the meteorite's history. If of 2004. The stone was analyzed and classified at Northern Arizona University (T. Bunch and J. Wittke), and NWA 2635 was initially considered to be a highly equilibrated and recrystallized H chondriteOrdinary chondrites with a high content of free Ni-Fe metal (15-19 vol. %) and attracted easily to a magnet. Their main minerals are olivine (Fa16-20) and the orthopyroxene bronzite (Fs14.5-18.5), earning them their older name of bronzite chondrites. Chondrules average ~0.3 mm in diameter. Comparison of the reflectance spectra of lacking any relict chondrulesRoughly spherical aggregate of coarse crystals formed from the rapid cooling and solidification of a melt at  ~1400 ° C. Large numbers of chondrules are found in all chondrites except for the CI group of carbonaceous chondrites. Chondrules are typically 0.5-2 mm in diameter and are usually composed of olivine. The olivineGroup of silicate minerals, (Mg,Fe)2SiO4, with the compositional endpoints of forsterite (Mg2SiO4) and fayalite (Fe2SiO4). Olivine is commonly found in all chondrites within both the matrix and chondrules, achondrites including most primitive achondrites and some evolved achondrites, in pallasites as large yellow-green crystals (brown when terrestrialized), in the silicate portion Fa (18.9) and pyroxeneA class of silicate (SiO3) minerals that form a solid solution between iron and magnesium and can contain up to 50% calcium. Pyroxenes are important rock forming minerals and critical to understanding igneous processes. For more detailed information, please read the Pyroxene Group article found in the Meteoritics & Classification category. Fs (16.8) values are consistent with the H chondriteChondrites are the most common meteorites accounting for ~84% of falls. Chondrites are comprised mostly of Fe- and Mg-bearing silicate minerals (found in both chondrules and fine grained matrix), reduced Fe/Ni metal (found in various states like large blebs, small grains and/or even chondrule rims), and various refractory inclusions (such group.

Based on the completed O-isotope analyses, it is evident that the ratios plot on an oxygen three-isotope diagram slightly outside of the main field of H chondritesChondrites are the most common meteorites accounting for ~84% of falls. Chondrites are comprised mostly of Fe- and Mg-bearing silicate minerals (found in both chondrules and fine grained matrix), reduced Fe/Ni metal (found in various states like large blebs, small grains and/or even chondrule rims), and various refractory inclusions (such while still overlapping the fields that resolve the H chondrite–IIE iron parent bodyThe body from which a meteorite or meteoroid was derived prior to its ejection. Some parent bodies were destroyed early in the formation of our Solar System, while others like the asteroid 4-Vesta and Mars are still observable today.. Further studies will be needed to examine the possibility that the O-isotope ratios might have been shifted due to open systemDefinable part of the universe that can be open, closed, or isolated. An open system exchanges both matter and energy with its surroundings. A closed system can only exchange energy with its surroundings; it has walls through which heat can pass. An isolated system cannot exchange energy or matter with aqueous flows on the H chondrite parent body. Since NWA 2635 is a recrystallized, texturally evolved chondrite with elemental ratios and an O-isotopic composition showing affinities to the H chondrite group, it is appropriately assigned to the newly proposed group of metachondrites (Irving et al., 2005).

Northwest Africa 2635 is unshocked (S1, peak shock pressure <5 GPa), and has experienced moderate terrestrial weathering (W2). The numerous small vugs that occur throughout this meteoriteWork in progress. A solid natural object reaching a planet’s surface from interplanetary space. Solid portion of a meteoroid that survives its fall to Earth, or some other body. Meteorites are classified as stony meteorites, iron meteorites, and stony-iron meteorites. These groups are further divided according to their mineralogy and may be indicative of a very high-temperature environment during formation, consistent with greater depth within the asteroid. Despite some petrographic differences, e.g., differences in grain size, differences in O-isotopic compositions, and the absence of clinopyroxene in NWA 2635, there exist very close similarities between NWA 2635 and the paired metachondrites NWA 2353 and NWA 3145, and in all likelihood they constitute a pairing group. Furthermore, there is a strong possibility that the H7 chondrite NWA 2835 also belongs to this pairing group (Irving and Kuehner, UWS; Bunch, NAU). The specimen of NWA 2635 shown above is a 6.45 g partial slice. 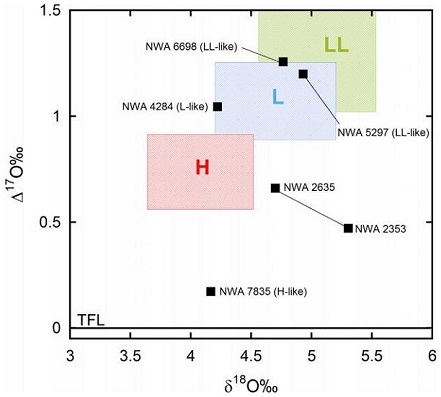 Diagram credit: Greenwood et al., Chemie der Erde, vol. 77, p. 24 (2017)
‘Melting and differentiationA process by which a generally homogeneous chondritic body containing mostly metal, silicates and sulfides will melt and form distinct (differentiated) layers of different densities.   When the melting process continues for a long enough period of time, the once chondritic body will re-partition into layers of different composition including of early-formed asteroids: The perspective from high precision oxygenElement that makes up 20.95 vol. % of the Earth's atmosphere at ground level, 89 wt. % of seawater and 46.6 wt. % (94 vol. %) of Earth's crust. It appears to be the third most abundant element in the universe (after H and He), but has an abundance only isotopeOne of two or more atoms with the same atomic number (Z), but different mass (A). For example, hydrogen has three isotopes: 1H, 2H (deuterium), and 3H (tritium). Different isotopes of a given element have different numbers of neutrons in the nucleus. studies’
(open access: http://dx.doi.org/10.1016/j.chemer.2016.09.005)