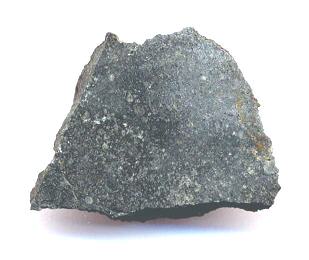 Found
no coordinates recorded Several fusion-crusted stones were found in the Sahara Desert of Northwest Africa weighing together 18 kg. A sample was submitted to the Museum für Naturkunde, Institut für Mineralogie, Humboldt-Universität zu Berlin, Germany (A. Greshake and M. Kurz). Although NWA 2488 was found to have a mineralogy intermediate between that of the H and L groups, it was classified as an H5 chondriteChondrites are the most common meteorites accounting for ~84% of falls. Chondrites are comprised mostly of Fe- and Mg-bearing silicate minerals (found in both chondrules and fine grained matrix), reduced Fe/Ni metal (found in various states like large blebs, small grains and/or even chondrule rims), and various refractory inclusions (such.

The specimen of NWA 2488 shown above is a 11.94 g end section. The photo of NWA 2488 shown below is an 8.88 g specimen in the Christian Anger Collection which demonstrates the result of an artistic collaboration between Mother Nature and the meteoriteWork in progress. A solid natural object reaching a planet’s surface from interplanetary space. Solid portion of a meteoroid that survives its fall to Earth, or some other body. Meteorites are classified as stony meteorites, iron meteorites, and stony-iron meteorites. These groups are further divided according to their mineralogy and cutter—a beautiful manifestation of a fireballA fireball is another term for a very bright meteor, generally brighter than magnitude -4, which is about the same magnitude of the planet Venus as seen in the morning or evening sky. A bolide is a special type of fireball which explodes in a bright terminal flash at its end, often with visible fragmentation. against a starry sky. 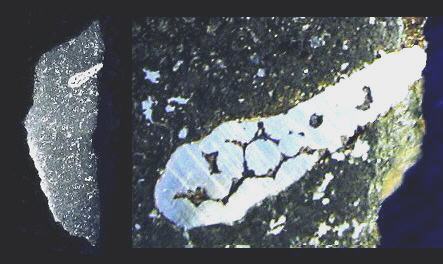