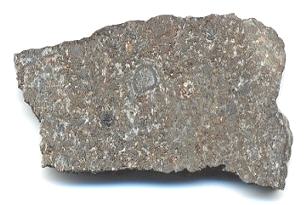 After in-depth analyses of many CV and CK meteorites having a wide range of petrologic types was conducted by Wasson et al. (2013), they presented a reasoned argument for merging the CK and CV groups into a single unified group. The geochemical and petrological justification for such a reclassification of the CK chondrites, along with details of their proposed taxonomic scheme, can be found on the Dhofar 015 page. Subsequent studies have demonstrated a high likelihood for separate parent bodies. One such study conducted by Dunn et al. (2016) compared magnetite in a number of CK and CV chondritesMeteorite class named after the Vigarano meteorite that fell in Italy in 1910. They have abundant large, well-defined rimless (?) chondrules of magnesium-rich olivine (~0.7 mm diameter; 40-65 vol. %), often surrounded by iron sulfide. They also contain 7-20 vol. % CAIs. The often dark-gray matrix is dominated by Fe-rich. They presented geochemical, mineralogical, and petrographic evidence which is more consistent with separate CV and CK parent bodies. Another study conducted by Yin et al. (2017) utilized a coupled Δ17O vs. ε54Cr diagram to plot several CK and CV chondrites. Through this technique they demonstrated that these two meteorite groups derive from separate parent bodies. Details of these studies can also be found on the Dhofar 015 page. The photo above shows a 1.4 g partial slice of NWA 2388.