Martian ShergottiteIgneous stony meteorite with a Martian origin consisting mainly of plagioclase (or a shocked glass of plagioclase composition) and pyroxene. They are the most abundant type of SNC meteorites and the type member is the Shergotty meteorite, which fell in India in 1865. Shergottites are igneous rocks of volcanic or
low-Al basaltBasalt is the most common extrusive igneous rock on the terrestrial planets. For example, more than 90% of all volcanic rock on Earth is basalt. The term basalt is applied to most low viscosity dark silicate lavas, regardless of composition. Basalt is a mafic, extrusive and fine grained igneous rock ∗
(intermediate, maficOne of the two broad categories of silicate minerals, the other being felsic, based on its magnesium (Mg) and/or iron (Fe) content. Mafic indicates silicate minerals that are predominantly comprised of Mg and/or Fe.The term is derived from those major constituents: Magnesium + Ferrum (Latin for iron) + ic (having, diabase) 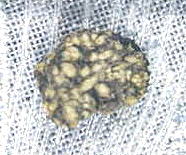 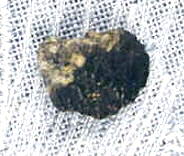 Purchased June, 2002
no coordinates recorded
A single, very fresh, individual stone meteoriteWork in progress. A solid natural object reaching a planet’s surface from interplanetary space. Solid portion of a meteoroid that survives its fall to Earth, or some other body. Meteorites are classified as stony meteorites, iron meteorites, and stony-iron meteorites. These groups are further divided according to their mineralogy and covered by shiny black fusion crustMelted exterior of a meteorite that forms when it passes through Earth’s atmosphere. Friction with the air will raise a meteorite’s surface temperature upwards of  4800 K (8180 °F) and will melt (ablate) the surface minerals and flow backwards over the surface as shown in the Lafayette meteorite photograph below. was found by a nomad in the Moroccan Sahara. This meteorite weighed 70.2 g and had dimensions of 47 × 34 × 27 mm. It was subsequently acquired by a Moroccan meteorite dealer who provided a sample of the stone to the University of Washington (A. Irving and S. Kuehner) for petrographic analysis. It was determined that NWA 1460 is a martian mafic, basaltic, or more properly, diabasic shergottite that is texturally and compositionally identical to the 28 g shergottite NWA 480 (Barrat et al., 2002) previously found by the same nomad; the two stones are considered to be paired. Sometime thereafter, the mass of NWA 1460, carrying the name ‘Black Beauty’, was purchased by N. Oakes.

This is a coarse-grained shergottite composed primarily of large (typically 2 mm, but up to 5 mm), highly zoned, light yellow-green, low-Ca pyroxeneA class of silicate (SiO3) minerals that form a solid solution between iron and magnesium and can contain up to 50% calcium. Pyroxenes are important rock forming minerals and critical to understanding igneous processes. For more detailed information, please read the Pyroxene Group article found in the Meteoritics & Classification category. crystals along with maskelyniteNatural glass composed of isotropic plagioclase produced during shock metamorphism (not melting) at pressures of ~30 GPa. Maskelynite is commonly found in shergottites though also found in some ordinary chondrites, HED and lunar meteorites. It is also found in association with meteorite impact craters and crater ejecta. Named after British glass. Minor constituents include the phosphate minerals merrillite and chlorapatite, the opaque minerals titanomagnetite, ilmeniteTi-Fe oxide, TiFeO3, found in achondrites, lunar mare basalts, and shergottites. Ilmenite forms as a primary mineral in mafic igneous rocks. It crystallizes relatively early out of a magma before most of the other minerals, and as a result, the heavier crystals of ilmenite precipitate to the bottom of the magma, chromiteBrownish-black oxide of chromium and iron (Cr-Fe oxide), Cr2FeO4, found in many meteorite groups., and pyrrhotiteIron sulfide group of minerals whose composition ranges widely between its end members pyrrhotite (Fe7S8) whose crystal structure is monoclinic, and troilite (FeS) whose crystal structure is hexagonal. Its general formula is Fe1−xS (where x = 0 to 0.17). The troilite phase is found mainly in meteorites and in the, and it is completely lacking in olivineGroup of silicate minerals, (Mg,Fe)2SiO4, with the compositional endpoints of forsterite (Mg2SiO4) and fayalite (Fe2SiO4). Olivine is commonly found in all chondrites within both the matrix and chondrules, achondrites including most primitive achondrites and some evolved achondrites, in pallasites as large yellow-green crystals (brown when terrestrialized), in the silicate portion. Symplectitic intergrowths consisting of varying amounts of fayalite+hedenbergite+silicaSilicon dioxide, SiO2. occur along some grain boundaries. These are thought to represent breakdown products of silicates. BaddeleyiteA rare zirconium oxide (ZrO2) mineral, often formed as a shock-induced breakdown product of zircon. This mineral can be found in some lunar and martian meteorites. (zirconium dioxide) has been identified associated with the symplectites. Pyroxenes are compositionally similar to those in QUE 94201 and Los Angeles, which suggests that they all experienced similar crystallizationPhysical or chemical process or action that results in the formation of regularly-shaped, -sized, and -patterned solid forms known as crystals. histories. However, it is noteworthy that the NWA 1460 pyroxenes have cores with higher magnesium contents than the others. The texture of these shergottitesIgneous stony meteorite with a Martian origin consisting mainly of plagioclase (or a shocked glass of plagioclase composition) and pyroxene. They are the most abundant type of SNC meteorites and the type member is the Shergotty meteorite, which fell in India in 1865. Shergottites are igneous rocks of volcanic or is consistent with a slow, single-stage cooling process consistent with fractional crystallizationA crystallization process in which minerals crystallizing from a magma are isolated from contact with the liquid. It is a key process in the formation of igneous rocks during the process of magmatic differentiation. Also known as crystal fractionation..

Trace element and isotopic studies of NWA 480/1460 indicate that this meteorite might be derived from the same general source region as the poikilitic shergottites, but that its parent magmaMolten silicate (rock) beneath the surface of a planetary body or moon. When it reaches the surface, magma is called lava. experienced more extreme fractionationConcentration or separation of one mineral, element, or isotope from an initially homogeneous system. Fractionation can occur as a mass-dependent or mass-independent process. (Bunch et al., 2005). The Rb–Sr and Sm–Nd ratios calculated for the source regions of NWA 480/1460 and the poikilitic shergottites are very similar to each other, and similar to the ratio determined for bulk Mars, but they are very different from these elemental ratios in other SNC members (Nyquist et al, 2009). However, the large discrepency in age that exists between NWA 480/1460 (~346 m.y.) and the poikilitic shergottites (~185 m.y.) likely rules out any parental source relationship. Notably, the unique ol-phyric shergottite NWA 6234/2990/5960/6710 has similar intermediate incompatible trace element values and isotopic compositions to the intermediate basaltic shergottite NWA 480/1460. This raises the possibility that they are genetically related and derive from a common mantle source region (Filiberto et al., 2012).

The CRE age of NWA 1460 based on 10Be production by local irradiation from the proto-Sun is 2.5–3.1 m.y. (2.6 ±0.2 m.y. determined by Nishiizumi), which is consistent with the 2.4 (±0.2) m.y. CRE age calculated for the paired meteorite NWA 480. As elucidated by Nyquist et al (2009), this CRE age also falls near the lower range of that of several other martian meteorites, including the enriched shergottites Zagami (2.8 [±0.3] m.y.) and Shergotty, the depleted shergottite QUE 94201 (2.7 [±0.2] m.y.), and the primitive basaltic shergottite Y-980459 (2.1–2.8 m.y., adjusted for terrestrial age). Moreover, this CRE age is within statistical uncertainty of the ejection age of the poikilitic shergottites such as ALHA77005, provided there was pre-exposure on Mars for this group. This CRE age could also be consistent with that of EET 79001, a meteorite with an identical crystallization age to that of both the enriched shergottites and the poikilitic shergottites, provided that there was an in-space breakup of the large EET 79001 parent meteoroidSmall rocky or metallic object in orbit around the Sun (or another star).. Cosmogenic 21Ne/22Ne ratios are consistent with such an extended period of shielding within a large body. In addition, the CRE age of the enriched shergottite NWA 1068 could also be consistent with this ejection event given its highly variable CRE age measurements, although it may instead belong with the DaG 476 ejection event. These possibly concordant CRE ages suggest that all of these meteorites may have been ejected in a common impact event (Marty et al., 2001).

In a study of the Li systematics in NWA 480, Beck et al. (2004) found that Li in the pyroxenes reveals a large isotopic variation from coreIn the context of planetary formation, the core is the central region of a large differentiated asteroid, planet or moon and made up of denser materials than the surrounding mantle and crust. For example, the cores of the Earth, the terrestrial planets and differentiated asteroids are rich in metallic iron-nickel. to rim, but that it also maintains a constant concentration. They suggest these compositional trends for Li reflect the loss of Li (i.e., mass-fractionation) from the crystallizing melt through the degassing of water-rich fluids, a process similar to that proposed to have occurred in the basaltic shergottites Shergotty and Zagami.

A study of the degree of shock experienced by the paired shergottite NWA 480 (a study which included several other shergottites) was undertaken by Aoudjehane et al. (2005). Utilizing cathdoluminescence and Raman spectroscopyTechnique of splitting electromagnetic radiation (light) into its constituent wavelengths (a spectrum), in much the same way as a prism splits light into a rainbow of colors. Spectra are not smooth but punctuated by 'lines' of absorption or emission caused by interaction with matter. The energy levels of electrons in, they found that stishoviteDense, high-pressure phase of quartz; so far identified only in shock-metamorphosed, quartz-bearing rocks from meteorite impact craters. Stishovite was synthesized in 1961 before it was discovered at Meteor Crater, Arizona. Its structure consists of parallel chains of single SiO6 octahedra. The octahedra are on their sides, sharing opposing edges. Image always coexists with high-pressure silica glass and occurs throughout. They also found that the highly unstable post-stishovite was very likely a common component, although one which could only be indirectly observed given the techniques that were used. In addition, they described for the first time stishovite needles which occur near shock-melt pockets. In light of the presence of all these particular silica phases, they estimated that a shock intensity in excess of 60 GPa affected this shergottite and the others in their study. However, they found that the shock intensities were strongly heterogeneous in all of the shergottites studied.

Although the 14.67 g basaltic diabase NWA 5029 is probably not paired to NWA 480/1460, it has a similar crystallization age (~340 m.y.) and CRE age (~2.5 m.y.) and exhibits some close textural and mineralogical similarities. While it is plausible that these meteorites originated from the same parental source melt on Mars, they crystallized under different conditions—NWA 480 experienced uniformly rapid cooling and crystallization, while NWA 5029 experienced initial slow cooling followed by more rapid crystallization during later stages (Mikouchi and Barrat, 2009). Nagao and Mikouchi (2010) determined that NWA 480 is less contaminated by terrestrial heavy noble gasesElement occurring in the right-most column of the periodic table; also called "inert" gases. In these gases, the outer electron shell is completely filled, making them very unreactive. than NWA 5029, indicating significant differences in their terrestrial residence as a result of separate trajectories from Mars. In a study of the high-temperature, oxidized titano-magnetite in NWA 480, NWA 1460, and NWA 5029, Hoffmann et al. (2011) found that there is a similar magnetic signature and similar textures among them, which attests to the likelihood that they are launch paired. The natural remanent magnetization of NWA 5029 may be attributed to the ejection event on Mars.

The photo above shows both sides of a 0.47 g crusted cut fragment of NWA 1460. A photo of the cut face of the main massLargest fragment of a meteorite, typically at the time of recovery. Meteorites are commonly cut, sliced or sometimes broken thus reducing the size of the main mass and the resulting largest specimen is called the "largest known mass". of NWA 1460 is shown below, along with a cut section of NWA 480 for comparison (scale approximated). The 25 g main mass of NWA 480 is now curated at the Centre National d’Etudes Spatiales (CNES) in France. 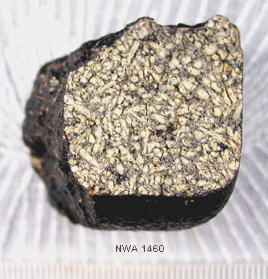 Photo courtesy of B. Fectay and C. Bidaut—The Earth’s Memory