Meta-CV or -ung
‘CX’ trend
(AchondriteAn achondrite is a type of stony meteorite whose precursor was of chondritic origin and experienced metamorphic and igneous processes. They have a planetary or differentiated asteroidal origin where the chondritic parent body reached a sufficient size that through heating due to radioactive decay of 26Al (aluminum isotope) and gravitational ungroupedModifying term used to describe meteorites that are mineralogically and/or chemically unique and defy classification into the group or sub-group they most closely resemble. Some examples include Ungrouped Achondrite (achondrite-ung), Ungrouped Chondrite (chondrite-ung), Ungrouped Iron (iron-ung), and Ungrouped Carbonaceous (C-ung). in MetBull 105) 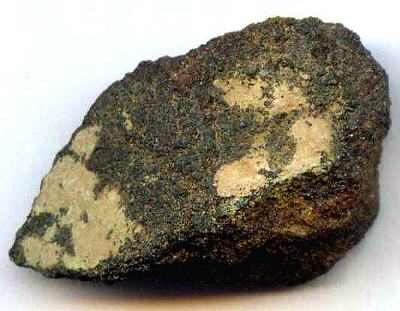 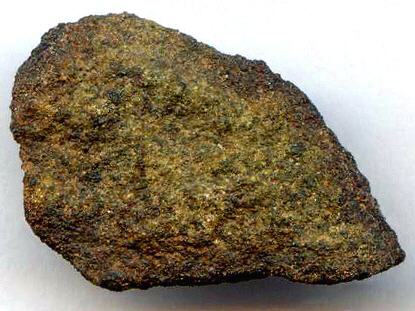 Purchased May 2015
no coordinates recorded A single 407 g meteoriteWork in progress. A solid natural object reaching a planet’s surface from interplanetary space. Solid portion of a meteoroid that survives its fall to Earth, or some other body. Meteorites are classified as stony meteorites, iron meteorites, and stony-iron meteorites. These groups are further divided according to their mineralogy and was found in the Sahara Desert, possibly near Tan Tan, Morocco, and subsequently purchased by F. Kuntz in Zagora, Morocco on behalf of Planetary Studies Foundation in Galena, Illinois. An analysis was conducted at the University of Washington in Seattle (A. Irving and S. Kuehner), and NWA 10503 was determined to be a texturally-evolved meteorite exhibiting ~120° triple junctions with no relict chondrulesRoughly spherical aggregate of coarse crystals formed from the rapid cooling and solidification of a melt at  ~1400 ° C. Large numbers of chondrules are found in all chondrites except for the CI group of carbonaceous chondrites. Chondrules are typically 0.5-2 mm in diameter and are usually composed of olivine visible. The elevated silicateThe most abundant group of minerals in Earth's crust, the structure of silicates are dominated by the silica tetrahedron, SiO44-, with metal ions occurring between tetrahedra). The mesodesmic bonds of the silicon tetrahedron allow extensive polymerization and silicates are classified according to the amount of linking that occurs between the FeO/MnO ratios are higher than those for ordinary chondritesChondrites are the most common meteorites accounting for ~84% of falls. Chondrites are comprised mostly of Fe- and Mg-bearing silicate minerals (found in both chondrules and fine grained matrix), reduced Fe/Ni metal (found in various states like large blebs, small grains and/or even chondrule rims), and various refractory inclusions (such and are consistent with a carbonaceous chondriteCarbonaceous chondrites represent the most primitive rock samples of our solar system. This rare (less than 5% of all meteorite falls) class of meteorites are a time capsule from the earliest days in the formation of our solar system. They are divided into the following compositional groups that, other than classification. In May 2016, a lot of smaller stones having a combined weight of 215 g was purchased by B. Hoefnagels. This group of stones was designated NWA 10859, and results of petrographic and isotopic analyses (A. Irving and S. Kuehner, UWS; K. Ziegler, UNM) led to the determination that they are paired with NWA 10503.

On an oxygenElement that makes up 20.95 vol. % of the Earth's atmosphere at ground level, 89 wt. % of seawater and 46.6 wt. % (94 vol. %) of Earth's crust. It appears to be the third most abundant element in the universe (after H and He), but has an abundance only three-isotope diagram the values plot away from all other analyzed meteorites and along an extension of the trend line for the ungrouped pallasiteOne of two main classes of stony-iron meteorite, the other being mesosiderites. Pallasites are igneous in nature and characterized by crystals of olivine, sometimes peridot (green gem quality clear olivine crystals), embedded in a matrix of Fe-Ni metal. The type specimen, weighing 680 kg, was found in the mountains near Milton (K. Ziegler, UNM; see diagram below). NWA 10503 was initially classified as an ungrouped carbonaceous metachondriteTerm used to describe a metamorphosed chondrite. Also referred to as a type 7 chondrite. Metachondrites are texturally evolved rocks derived from chondritic precursors and some have been classified as primitive achondrites. that might be related to the Milton pallasite. 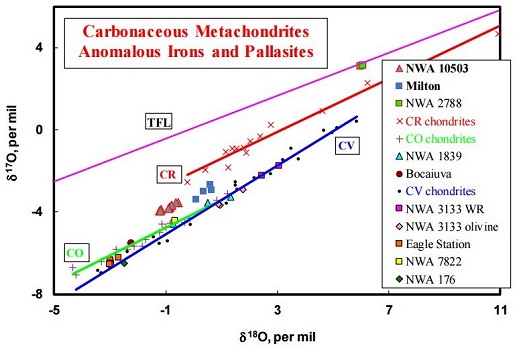 click on image for a magnified view Diagram credit: Irving et al., 79th MetSoc, #6461 (2016) In an effort to better resolve potential genetic relationships that might exist among these meteorites, a Cr-isotopic analysis was conducted by Sanborn et al. (2018) for NWA 10503 as well as for olivineGroup of silicate minerals, (Mg,Fe)2SiO4, with the compositional endpoints of forsterite (Mg2SiO4) and fayalite (Fe2SiO4). Olivine is commonly found in all chondrites within both the matrix and chondrules, achondrites including most primitive achondrites and some evolved achondrites, in pallasites as large yellow-green crystals (brown when terrestrialized), in the silicate portion from the Milton pallasite. It is demonstrated on a coupled Δ17O vs. ε54Cr diagram (shown below) that both meteorites plot among the CV clan and plausibly share a genetic relationship. Chromium vs. Oxygen IsotopeOne of two or more atoms with the same atomic number (Z), but different mass (A). For example, hydrogen has three isotopes: 1H, 2H (deuterium), and 3H (tritium). Different isotopes of a given element have different numbers of neutrons in the nucleus. Plot

click on diagram for a magnified view Diagram credit: Sanborn et al., 49th LPSC, #1780 (2018) In an effort to further resolve differences between the CV and CK chondriteClass of carbonaceous chondrite named for the Karoonda meteorite that fell in Australia in 1930. They are more oxidized than all other carbonaceous chondrites and genetically distinct from CV chondrites. CK chondrites appear dark-gray or black due to a high percentage of Cr-rich magnetite dispersed in a matrix of dark groups, Yin and Sanborn (2019) analyzed Cr isotopes in a significant number and broad range of meteorites. Their study included samples from each of the three CV subgroups (oxA, oxB, Red), anomalous CV3 chondrites, a C3-ungrouped, several CK members, and other potential CV-related meteorites including NWA 10503 and Milton (see top diagram below). It is demonstrated that the CV and CK meteorites are clearly resolved into two distinct isotopic reservoirs. In addition, it is shown by the ε54Cr values that NWA 10503 plots among the CV-related meteorites. A coupled Δ17O vs. ε54Cr diagram plotting all of the meteorites in the study is shown in the bottom diagram below. Cr Isotope Weighted Average For CV and CK Chondrites

click on photo for a magnified view Diagrams credit: Yin and Sanborn et al., 50th LPSC, #3023 (2019)
In a study of two newly recovered ungrouped carbonaceous meteorites, the unequilibrated chondriteA chondrite with heterogeneous mineral compositions (e.g., olivine grains with differing FeO/(FeO+MgO) ratios. NWA 11961 and the dunitic brecciaWork in Progress ... A rock that is a mechanical mixture of different minerals and/or rock fragments (clasts). A breccia may also be distinguished by the origin of its clasts: (monomict breccia: monogenetic or monolithologic, and polymict breccia: polygenetic or polylithologic). The proportions of these fragments within the unbrecciated material NWA 12264, Irving et al. (2019) further populated the O-isotopic trend line previously defined by NWA 10503 and the Milton pallasite; they termed this the ‘CX’ trend. However, Cr isotope data obtained for all of these meteorites have resolved both NWA 11961 and NWA 12264 as potential new carbonaceous parent bodies distinct from that of NWA 10503 and Milton, the latter previously considered possible members of the CV-clan (see diagrams below). ‘CX’ Oxygen Isotope Trend Line 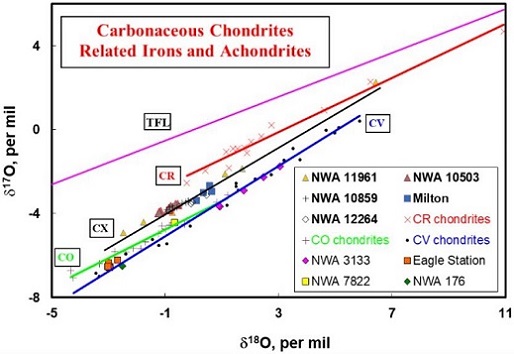 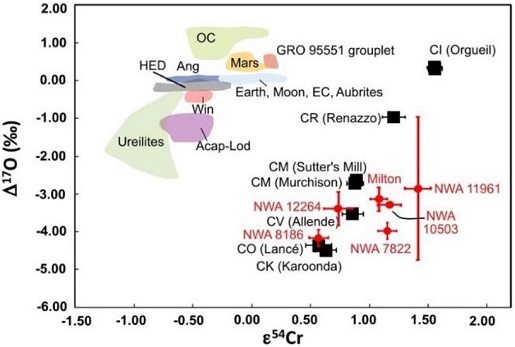 click on photo for a magnified view Diagrams credit: Irving et al., 50th LPSC, #2542 (2019)
Another ungrouped metachondrite with affinities to carbonaceous chondrites is NWA 2788. This meteorite has a metamorphicRocks that have recrystallized in a solid state due to changes in temperature, pressure, and chemical environment. texture exhibiting ~120° triple junctions, elevated Fe/Mn and Ca/Na ratios, and an O-isotopic composition that plots very near to the TFL. Bunch et al. (2006) suggest that if a chondrule-bearing representative of this parent bodyThe body from which a meteorite or meteoroid was derived prior to its ejection. Some parent bodies were destroyed early in the formation of our Solar System, while others like the asteroid 4-Vesta and Mars are still observable today. is found and identified in the future it should be termed a ‘CT chondrite’ (see NWA 2788 photos, abstracts [1, 2], and isotopic plot). Northwest Africa 10503 is a somewhat friable meteorite with features indicating a low degree of terrestrial weathering and a low shock stageA petrographic assessment, using features observed in minerals grains, of the degree to which a meteorite has undergone shock metamorphism. The highest stage observed in 25% of the indicator grains is used to determine the stage. Also called "shock level".              . Two views of a 3.79 g fragment of NWA 10503 are shown above. In the top photo below are some of the larger stones representing the paired NWA 10859, while two stones of NWA 10503 with green-colored fusion crustMelted exterior of a meteorite that forms when it passes through Earth’s atmosphere. Friction with the air will raise a meteorite’s surface temperature upwards of  4800 K (8180 °F) and will melt (ablate) the surface minerals and flow backwards over the surface as shown in the Lafayette meteorite photograph below. are shown in the bottom photo.