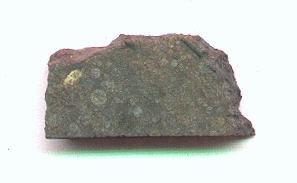 Found 1999
30° 54′ N., 3° 58′ W. A stone weighing 192 g was found in the Moroccan Sahara. Northwest Africa 033 is also known as Taouz 003. Classification was done at the Institut für Planetologie, Münster, Germany (main massLargest fragment of a meteorite, typically at the time of recovery. Meteorites are commonly cut, sliced or sometimes broken thus reducing the size of the main mass and the resulting largest specimen is called the "largest known mass". with JNMC). This carbonaceous chondriteCarbonaceous chondrites represent the most primitive rock samples of our solar system. This rare (less than 5% of all meteorite falls) class of meteorites are a time capsule from the earliest days in the formation of our solar system. They are divided into the following compositional groups that, other than is unusual in light of its low matrixFine grained primary and silicate-rich material in chondrites that surrounds chondrules, refractory inclusions (like CAIs), breccia clasts and other constituents. abundance and nearly equilibrated olivines within the chondrulesRoughly spherical aggregate of coarse crystals formed from the rapid cooling and solidification of a melt at  ~1400 ° C. Large numbers of chondrules are found in all chondrites except for the CI group of carbonaceous chondrites. Chondrules are typically 0.5-2 mm in diameter and are usually composed of olivine. It has an O-isotope composition nearly identical to that of Allende and Axtell, with an oxygenElement that makes up 20.95 vol. % of the Earth's atmosphere at ground level, 89 wt. % of seawater and 46.6 wt. % (94 vol. %) of Earth's crust. It appears to be the third most abundant element in the universe (after H and He), but has an abundance only three-isotope plot within the CV field. However, it contains less trapped noble gasesElement occurring in the right-most column of the periodic table; also called "inert" gases. In these gases, the outer electron shell is completely filled, making them very unreactive., having only a cosmogenic component of neon. It has a CRE age of ~20 m.y. Northwest Africa 033 is shocked to stage S2 and is highly weathered to a grade of W3/4. The specimen of NWA 033 shown above is a 5.3 g partial slice with some remnant fusion crustMelted exterior of a meteorite that forms when it passes through Earth’s atmosphere. Friction with the air will raise a meteorite’s surface temperature upwards of  4800 K (8180 °F) and will melt (ablate) the surface minerals and flow backwards over the surface as shown in the Lafayette meteorite photograph below.. The top photo below shows the reverse side, while the bottom photo shows a thin sectionThin slice or rock, usually 30 µm thick. Thin sections are used to study rocks with a petrographic microscope. of NWA 033, courtesy of JNMC Meteorites. 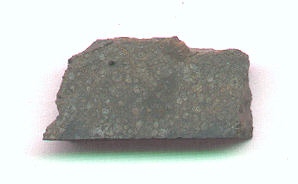 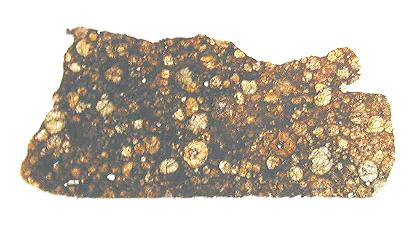