Fell June 25, 1983
32° 55.5′ N., 105° 54.4′ E. At 7:00 in the evening, this unique carbonaceous chondriteCarbonaceous chondrites represent the most primitive rock samples of our solar system. This rare (less than 5% of all meteorite falls) class of meteorites are a time capsule from the earliest days in the formation of our solar system. They are divided into the following compositional groups that, other than fell in Ningqiang County, Shaanxi Province, The People’s Republic of China. Four stones were recovered weighing 0.35, 0.38, 0.78, and 3.1 kg for a total of 4.61 kg. The curator for the majority of the material is the Zijin Shan Observatory, Academia Sinica, in Nanjing, People’s Republic of China.

click on photo for a magnified view Diagrams credit: Yin and Sanborn et al., 50th LPSC, #3023 (2019)
A unique dark inclusion (DI) was discovered in Ningqiang which represents some of the most pristine nebular material ever studied (Zolensky et al., 2003). It comprises two lithologies, both of which consist of µm-sized olivine and pyroxeneA class of silicate (SiO3) minerals that form a solid solution between iron and magnesium and can contain up to 50% calcium. Pyroxenes are important rock forming minerals and critical to understanding igneous processes. For more detailed information, please read the Pyroxene Group article found in the Meteoritics & Classification category. crystals, but in only one are the silicates rimmed by amorphousMaterial without the regular, ordered structure of crystalline solids. Amorphous substances, like glass, lack a definite repeating pattern in their atomic structures (crystallinity). There may be small regions of order, but, overall there is disorder.   to microcrystalline material. These rims are thought to have formed through irradiation by bipolar outflows or FU-orionis flares from the nascent SunOur parent star. The structure of Sun's interior is the result of the hydrostatic equilibrium between gravity and the pressure of the gas. The interior consists of three shells: the core, radiative region, and convective region. Image source: http://eclipse99.nasa.gov/pages/SunActiv.html. The core is the hot, dense central region in which the, and in fact, this rim material is the carrier for Ar-rich, heavy primordial noble gasesElement occurring in the right-most column of the periodic table; also called "inert" gases. In these gases, the outer electron shell is completely filled, making them very unreactive. that were produced in a plasmaFourth state of matter: a gas in which many or most of the atoms are ionized. In the plasma state the atoms have split into positive ions and negative electrons, which can flow freely, so the gas becomes electrically conducting and a current can flow. (Nakamura et al., 2003). In addition, an amorphous carbon phase in this DI contains both the dominant ‘Q’ noble gases (for ‘quintessence’) and exotic ‘HL’ noble gases (enriched in both heavy and light isotopes). This porous carbonaceous host phase for the Q-gases has been characterized by Amari et al. (2013) as nanoscale graphene platelets (see photo below). An in-depth investigation into the carbonaceous carrier of the Q-phase was conducted by Fisenko et al. (2018) utilizing the L4 chondrite Saratov. They contend that the carrier of the Q-gases is a nongraphitizing carbon phase present as curved, few-layer, graphene-like sheets which were likely formed in the protoplanetary nebula. The DI in the Ningqiang chondrite must have been incorporated after parent body aqueous alteration processes were complete and subsequent to partial annealing, since noble gases would have been quickly lost from host minerals through such oxidizingOxidation and reduction together are called redox (reduction and oxidation) and generally characterized by the transfer of electrons between chemical species, like molecules, atoms or ions, where one species undergoes oxidation, a loss of electrons,  while another species undergoes reduction, a gain of electrons. This transfer of electrons between reactants alteration processes (Yamamoto et al., 2006). 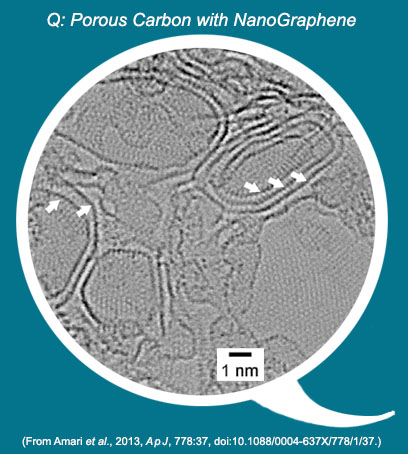