Fell March 22, 1998
102° 53.5′ W., 31° 36.5′ N. On a Sunday evening at 6:37 P.M., a fireballA fireball is another term for a very bright meteor, generally brighter than magnitude -4, which is about the same magnitude of the planet Venus as seen in the morning or evening sky. A bolide is a special type of fireball which explodes in a bright terminal flash at its end, often with visible fragmentation. that was observed for over 150 miles, accompanied by sonic booms and a dust train, dropped two stones on the town of Monahans, Texas. The first stone, weighing 1,243 g, created a 4-inch-deep craterBowl-like depression ("crater" means "cup" in Latin) on the surface of a planet, moon, or asteroid. Craters range in size from a few centimeters to over 1,000 km across, and are mostly caused by impact or by volcanic activity, though some are due to cryovolcanism. in the ground about 25 feet from where seven boys were playing basketball. This warm, black, fusion-crusted stone was recovered immediately. The second stone, which weighed 1,344 g, created a 2-inch-deep crater in the asphalt of Allen Street, and it was recovered the following morning. The cratered section of the road was also preserved. 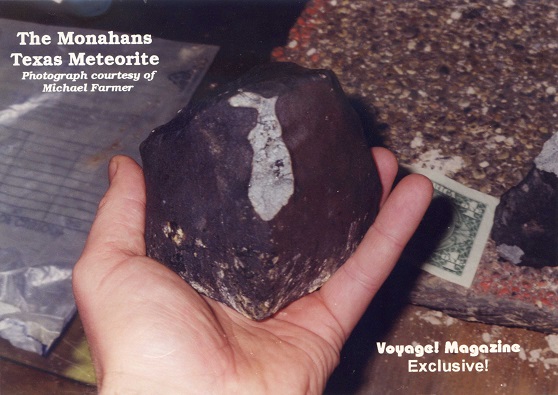