Iron, IIE, silicated octahedriteMost Common type of iron meteorite, composed mainly of taenite and kamacite and named for the octahedral (eight-sided) shape of the kamacite crystals. When sliced, polished and etched with an acid such as nitric acid, they display a characteristic Widmanstätten pattern. Spaces between larger kamacite and taenite plates are often
(HH chondriteChondrites are the most common meteorites accounting for ~84% of falls. Chondrites are comprised mostly of Fe- and Mg-bearing silicate minerals (found in both chondrules and fine grained matrix), reduced Fe/Ni metal (found in various states like large blebs, small grains and/or even chondrule rims), and various refractory inclusions (such related) 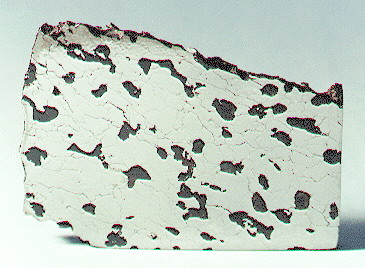 Found 1992
27° 50′ S., 150° 20′ E. A mass of about 265 kg was found by Mr. Frank Timms on open shrub farmland near Miles, in Queensland, Australia. About 100 kg was exported to the USA by M. Killgore and submitted for analysis. Miles has been classified as a group IIE iron belonging to the ‘fractionated IIE’ grouping, as distinct from the ‘normal IIE’, ‘IIE-An’, and ‘ungroupedModifying term used to describe meteorites that are mineralogically and/or chemically unique and defy classification into the group or sub-group they most closely resemble. Some examples include Ungrouped Achondrite (achondrite-ung), Ungrouped Chondrite (chondrite-ung), Ungrouped Iron (iron-ung), and Ungrouped Carbonaceous (C-ung). iron’ categories distinguished by Wasson and Wang (1986). Researchers divided the eight known (at the time) silicate-bearing IIE irons into five groups based on silicateThe most abundant group of minerals in Earth's crust, the structure of silicates are dominated by the silica tetrahedron, SiO44-, with metal ions occurring between tetrahedra). The mesodesmic bonds of the silicon tetrahedron allow extensive polymerization and silicates are classified according to the amount of linking that occurs between the inclusionFragment of foreign (xeno-) material enclosed within the primary matrix of a rock or meteorite. types: 1) chondritic clasts (Netschaëvo), 2) partially melted but undifferentiated clasts (Techado), 3) completely melted clasts with a loss of metalElement that readily forms cations and has metallic bonds; sometimes said to be similar to a cation in a cloud of electrons. The metals are one of the three groups of elements as distinguished by their ionization and bonding properties, along with the metalloids and nonmetals. A diagonal line drawn and sulfide (Watson 001), 4) plagioclase–orthopyroxene–clinopyroxene basaltic partial melts (Miles and Weekeroo Station), and 5) plagioclase–clinopyroxene partial melts (Colomera, Kodaikanal, and Elga) et al., 1998). Other researchers (e.g., Ruzicka, 2014) have followed a more simplified classification systemDefinable part of the universe that can be open, closed, or isolated. An open system exchanges both matter and energy with its surroundings. A closed system can only exchange energy with its surroundings; it has walls through which heat can pass. An isolated system cannot exchange energy or matter with for the ten silicate-bearing IIE irons known at the time, recognizing only two subgroups—unfractionated (Netschaëvo, Techado, and Watson 001) and fractionated (Miles, Weekeroo Station, Colomera, Kodaikanal, Elga, Tarahumara, and NWA 5608). As a result of their classification of the silicated IIE Mont Dieu, Van Roosbroek et al. (2015) suggest that a five-stage division from most primitive to most differentiated is most useful as follows: 1) Mont Dieu and Netschaëvo; 2) Techado; 3) Watson; 4) Miles and Weekeroo Station; 5) Kodaikanal, Colomera, and Elga. On the other hand, an investigation of silicated IIE irons by McDermott et al. (2015) led them to propose a classification scheme that comprises only four categories, from most primitive to most differentiated as follows: primitive chondritic (Netschaëvo, Mont Dieu, Garhi Yasin, Techado) → evolved chondritic (Watson 001) → differentiated with high opx (>10 vol%; Weekeroo Station, Miles, Tarahumara) → differentiated with low opx (<10 vol%; Kodaikanal, Colomera, and Elga).

In addition, on a CRE-corrected coupled ε100Ru vs. ε92Mo diagram, these nine IIE irons plot with ordinary chondrites indicating a probable genetic relationship; i.e., IIE irons formed through impact-generated melting on an ordinary chondriteWork in Progress Ordinary chondrites (OCs) are the largest meteorite clan, comprising approximately 87% of the global collection and 78% of all falls (Meteoritical Society database 2018)1. Meteorites & the Early Solar System: page 581 section 6.1 OC of type 5 or 6 with an apparent shock stage of S1, parent body during several impact events over an extended period of time. In addition, the IVA irons plot with the IIE irons and ordinary chondrites, and all of these groups likely originated in a similar reservoir (see diagram below). 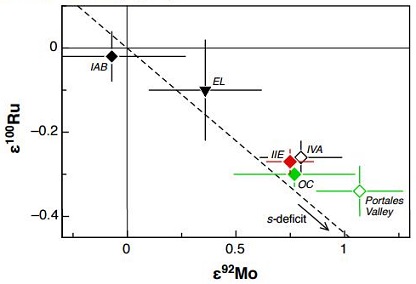 Diagram credit: Fisher-Gödde et al., 47th LPSC, #2704 (2016) In contrast to the ‘nonmagmatic’ IAB complex irons, the IIE precursor material contained a lower abundance of volatiles such as S and C, and consequently the melting temperatures were higher, resulting in silicates with nonchondritic compositions (Wasson and Wang, 1986). The metal–sulfide-rich H6 meteorite Y-791093 contains both chondritic and metal–sulfide components which are texturally, mineralogically, and compositionally similar to members of the H-chondrite group. It might be transitional between the H chondrites like Rose City and the primitive IIE irons with silicate inclusions like Netshaëvo (Ikeda et al., 1997). Similar to Miles, Y-791093 lacks a Thomson (Widmanstätten) structure and probably formed at a shallow depth rather than in a core.

Teplyakova et al. (2012) conducted studies on the differentiation of the IIE iron group. Based on comparisons of siderophile elements between IIE metal and H-chondrites, they determined that that all of the IIE irons are consistent with formation as solid metal which had precipitated from a metallic liquid of H-chondrite composition. It was determined that even metal from Miles, which has the most fractionated siderophile pattern of the group, precipitated from the parental liquid after ~70% crystallization of solid metal. These findings are contrary to a scenario involving quenching within cooler silicates following an impact, but instead suggest crystallization from a melt within a reducing, endogenously-heated environment. Utilizing new analytical techniques for measuring O-isotopic data, McDermott et al. (2011) found nearly identical mean Δ17O values for IIE irons and H chondrites. However, despite this finding and the data presented above, several factors suggest a different conclusion for the origin of the IIE group. Certain undifferentiated silicates in some IIE members contain FeO abundances that are below the range for H chondrites. Moreover, IIE O-isotopic compositions may only appear the same as those in H chondrites due to a lack of precision in the estimates and to the wide range of values. The O-isotopic values collected by Clayton et al. (1991) and Clayton and Mayeda (1996) were 0.14‰ lower for IIE irons than for H chondrites. In addition, Wasson and Scott (2011) documented significant differences between the metal in the Portales Valley H chondrite and in IIE irons on Co–AuThe astronomical unit for length is described as the "mean" distance (average of aphelion and perihelion distances) between the Earth and the Sun. Though most references state the value for 1 AU to be approximately 150 million kilometers, the currently accepted precise value for the AU is 149,597,870.66 km. The and Ga–Au plots. Moreover, olivine and chromite grains in the IIE irons which contain relict chondrulesRoughly spherical aggregate of coarse crystals formed from the rapid cooling and solidification of a melt at  ~1400 ° C. Large numbers of chondrules are found in all chondrites except for the CI group of carbonaceous chondrites. Chondrules are typically 0.5-2 mm in diameter and are usually composed of olivine (e.g., Netschaëvo, Mont Dieu) have Fa and Fs ranges as well as O-isotopic compositions distinct from H chondrites (Schrader et al., 2017). Furthermore, the CRE ages of the majority of the IIEs are much older than any H chondrite. Therefore, it is reasonable to conclude that the two groups formed on similar but separate parent bodies. The IIE meteorites may originate from an H chondrite-like parent body that experienced more extensive differentiation, was more reducedOxidation and reduction together are called redox (reduction and oxidation) and generally characterized by the transfer of electrons between chemical species, like molecules, atoms or ions, where one species undergoes oxidation, a loss of electrons,  while another species undergoes reduction, a gain of electrons. This transfer of electrons between reactants, and which had higher abundances of maficOne of the two broad categories of silicate minerals, the other being felsic, based on its magnesium (Mg) and/or iron (Fe) content. Mafic indicates silicate minerals that are predominantly comprised of Mg and/or Fe.The term is derived from those major constituents: Magnesium + Ferrum (Latin for iron) + ic (having silicates and metal, higher abundances of siderophile elements, and slightly different O-isotopic compositions—an ‘HH’ chondritic asteroid (Teplyakova et al., 2012; J. T. Wason, 2017). In an updated study of H chondrites and IIE silicated irons based on high precision O-isotopic data, McDermott et al. (2015) suggest that H chondrites (as well as HH chondrites) might derive from multiple source objects, with some possibly sharing a common parent body with IIE silicated irons. They argue that all of the IIE irons likely formed on a common large H/HH chondritic body that was heated internally by radiogenic elements but had not experienced significant differentiation. Following a severe impact disruption event, rapid cooling ensued preventing metal/silicate unmixing in some regions, succeeded by burial from re-accreting material which initiated a period of slow cooling. Late, less severe impact events occurred which established the ~3.7 b.y. old chronometric age of Netschaëvo and others, and fragments were ejected on a trajectory to Earth. Dey et al. (2019) employed 17O and ε54Cr values for several irons and their associated silicates/oxides to investigate i) if each iron and the associated phases originated on a common parent body (i.e., an endogenous mixture of core and mantle vs. an exogenous mixture through impact), and ii) if any genetic connection exists between the irons/pallasite and other meteorite groups (e.g., IAB with winonaites, IIE with H chondrites, and Eagle Station pallasites with CK chondrites). Two primitive IIE irons were included in the study, Netschaëvo and Watson 001, along with the H metallic melt breccia Portales Valley. It was demonstrated on a coupled diagram (see below) that the ε54Cr values for silicates in Portales Valley and both the silicates and the oxide phase (chromite) in Netschaëvo and Watson 001 are identical within error and plot with the H group chondrites. Other results from their study can be found on the Caddo County and Eagle Station pages. 17O vs. ε54Cr for Irons and Pallasites

click on photo for a magnified view Diagrams credit: Dey et al., 50th LPSC, #2977 (2019)
Prior interest in asteroid 6 Hebe as the source of the H chondrites has lost some favor after hydrocode model data revealed inconsistencies between expected and observed CRE ages based on the scenario of direct injection into resonances. Studies by Rubin and Bottke (2009) on this subject have led them to conclude that family-forming events resulting in large meteoroidSmall rocky or metallic object in orbit around the Sun (or another star). reservoirs having homogenous compositions, and which are located near dynamical resonances such as the Jupiter 3:1 mean motion resonance at 2.50 AU, are the most likely source of the most prevalent falls such as H chondrites and HED achondrites. See further details on the Abbott page. The specimen of Miles shown above is a 95 g partial slice showing abundant globular silicate inclusions.