LodraniteRare type of primitive achondrite named after the Lodran meteorite that fell in Pakistan in 1868. Initially, lodranites were grouped with the stony-iron meteorites because they contain silicates (olivine, orthopyroxene, and minor plagioclase) and Fe-Ni metal in nearly equal proportions. However, since discovery of the closely related acapulcoite group, lodranites
Acapulcoite–Lodranite Clan

click on photo for a magnified view Fell October 1, 1868
29° 32′ N., 71° 48′ E. This rare meteoriteWork in progress. A solid natural object reaching a planet’s surface from interplanetary space. Solid portion of a meteoroid that survives its fall to Earth, or some other body. Meteorites are classified as stony meteorites, iron meteorites, and stony-iron meteorites. These groups are further divided according to their mineralogy and fell at 2:00 P.M. about 12 miles east of Lodhran, Pakistan. About 1 kg was preserved but the ~700 g main massLargest fragment of a meteorite, typically at the time of recovery. Meteorites are commonly cut, sliced or sometimes broken thus reducing the size of the main mass and the resulting largest specimen is called the "largest known mass". in the Museum of Geology in Calcutta, India has been missing for some years. About 150 g is distributed among a few major museum collections, and a small amount exists in private collections. 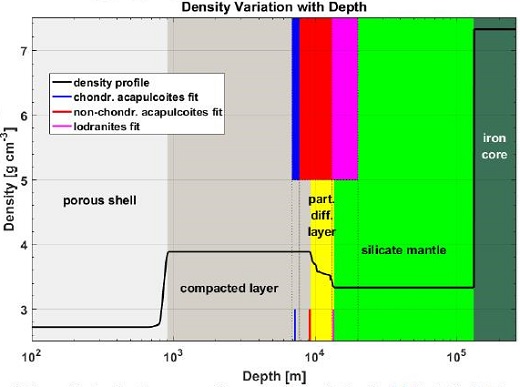 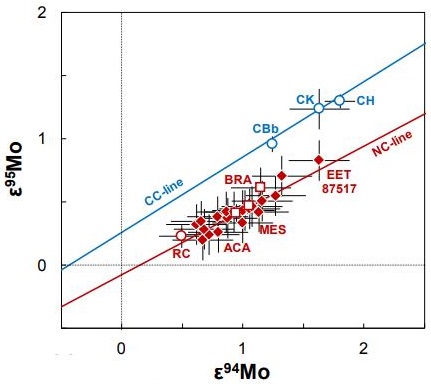 Accretion of the acapulcoite–lodranite planetesimal began ~4.565 b.y. ago and was complete after only ~1 m.y. This was followed by heterogeneous heating by radioactive elements and impact shock heating to temperatures ranging from 980°C (Monument Draw) to 1170°C (Acapulco) to ~1250°C (Lodran). The cooling history of the acapulcoite–lodranite parent body is varied and complex. Following the heating phase, which resulted in somewhat higher temperatures for lodranites (more deeply buried), both groups experienced a moderate cooling rate from peak metamorphic temperatures to about 600°C, at which time rapid cooling ensued until about 350°C, likely reflecting emplacement near the surface. At 300°C, a drastic decrease in the cooling rate was initiated until the temperature reached about 290°C. At this point a further sharp decrease in the cooling rate occurred until ~90°C was reached. This drastic change to very low cooling rates suggests an increase in the insulating regolith. In consideration of the I–Xe and Pb–Pb systems utilized by Crowther et al. (2009), the earliest this disruption could have occurred is 9.4 m.y. after CAI formation.

This complex cooling history may reflect the impact removal of a significant overburden, or the collisional breakup and reassembly of the acapulcoite–lodranite body. The parent body cooled to the Ar closure temperature ~4.51 b.y. ago for the acapulcoites and ~4.48 b.y. ago for the lodranites, reflecting the higher temperature and correspondingly longer cooling period of the lodranites. Identical I–Xe closure ages were calculated for both acapulcoite and lodranite samples by Crowther et al. (2009) to be 4.5582 b.y. relative to the Shallowater aubriteAubrites are named for the Aubres meteorite that fell in 1836 near Nyons, France. They are an evolved achondrite that is Ca-poor and composed mainly of enstatite (En100) and diopside (En50Wo50) with minor amounts of olivine (Fa0) and traces of plagioclase (An2-8).  They contain large white crystals of enstatite as (4.5627 ±0.0003 b.y.). This similarity in I–Xe closure ages is consistent with a very rapid cooling phase on the entire asteroid. A subsequent period of annealing resulted in recrystallization to produce equigranular textures and a loss of shock indicators (Rubin, 2007). A mean cosmic-ray exposure (CRE) age of ~5.5 (±0.9) m.y. was calculated for most of the lodranites (e.g., Eugster and Lorenzetti, 2005), and this age also coincides with that of virtually all of the acapulcoites (4.2–6.8 m.y.). Based on multiple chronometers and the measured CRE ages, it is considered that a single impact encompassing an area of a few km ejected most all of the meteorites constituting both groups (Neumann et al., 2018). Coincidentally, H-chondrite CRE ages coincide with the acapulcoite–lodranite CRE ages, possibly demonstrating disruption by common impactors. Notably, the chondrite Grove Mountains (GRV) 020043, initially classified as H4, is most similar to primitive achondrites of the acapulcoite–lodranite parent body based on both its mineralogy and with respect to its O-isotopic composition. It was proposed that this meteorite represents the chondritic precursor of the acapulcoite–lodranite parent body (Li et al., 2010; abstract. The differences that do exist, such as in the elements V, Cr, and Se, may be related to specific characteristics of the precursor phase (Hidaka et al., 2012). A comprehensive study of GRV 020043 and other related meteorites was subsequently conducted by Li et al. (2018), and they clearly demonstrated that the mineralogy, geochemistryStudy of the chemical composition of Earth and other planets, chemical processes and reactions that govern the composition of rocks and soils, and the cycles of matter and energy that transport Earth's chemical components in time and space., and O- and Cr-isotopic compositions of this meteorite support its reclassification as ‘Acapulcoite chondrite’, representing the chondritic, unmelted, outermost layer of the acapulcoite–lodranite parent body. They also provided similar evidence that NWA 468 derives from the ACA–LOD parent body, which, along with the metal-rich lodranite GRA 95209 (NASA lab photo), are considered to represent the deepest lithology (early core segregation) of the parent body. A schematic representation of the acapulcoite–lodranite parent body was presented by Li et al. (2018): Interior Structure of the Acapulcoite–Lodranite Parent Body 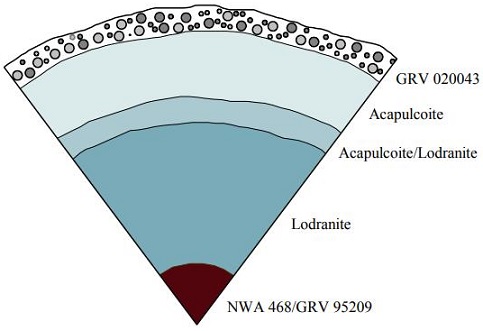 Schematic diagram credit: Li et al., GCA, vol. 242, p. 96 (2018)
‘Evidence for a Multilayered Internal Structure of the Chondritic Acapulcoite–Lodranite Parent Asteroid’
(https://doi.org/10.1016/j.gca.2018.09.004) Based on reflectance spectra data and oxygen isotope values, the asteroids 2 Pallas and 21 Lutetia have each been considered as a potential candidate parent object for the acapulcoite–lodranite clan meteorites (Neumann et al., 2018). While 2 Pallas also has a similar diameter and densityMass of an object divided by its volume. Density is a characteristic property of a substance (rock vs. ice, e.g.). Some substances (like gases) are easily compressible and have different densities depending on how much pressure is exerted upon them. The Sun is composed of compressible gases and is much to the optimized model of the AL parental asteroid, it follows that the much smaller 21 Lutetia would only represent a fragment derived from the original parent object. It is notable that the models employed by Neumann et al. (2018) indicate a small grain size (0.2 µm) for the precursor material of the AL parent body, consistent with a large matrixFine grained primary and silicate-rich material in chondrites that surrounds chondrules, refractory inclusions (like CAIs), breccia clasts and other constituents. component. Considering the high matrix volume present in K chondrites, along with the mineralogical and geochemical data for that rare group, they speculated that the K chondrites might represent the thin chondritic outer layer of the acapulcoite–lodranite parent body. For more information regarding the formation scenario of the acapulcoite–lodranite parent body, visit the Monument Draw page. The specimen shown above is a partial end section of the Lodran meteorite weighing 0.92 g and measuring 15 mm in its longest dimension. The photo shows a coarse grained aggregate with triple junctions, along with a metal component that had reached temperatures necessary for incipient melting prior to the onset of percolation. Below is a photo of a much larger specimen of Lodran curated at the National Museum of Natural History, Smithsonian Institution. 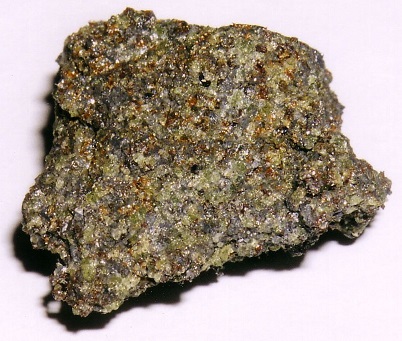