PallasiteOne of two main classes of stony-iron meteorite, the other being mesosiderites. Pallasites are igneous in nature and characterized by crystals of olivine, sometimes peridot (green gem quality clear olivine crystals), embedded in a matrix of Fe-Ni metal. The type specimen, weighing 680 kg, was found in the mountains near, PMG-am (anomalous metalElement that readily forms cations and has metallic bonds; sometimes said to be similar to a cation in a cloud of electrons. The metals are one of the three groups of elements as distinguished by their ionization and bonding properties, along with the metalloids and nonmetals. A diagonal line drawn composition)
high-Δ17O subgroup (see details on the Imilac page) 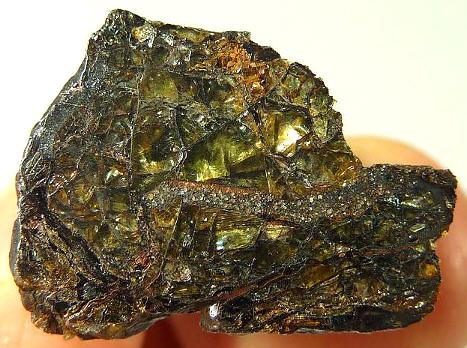 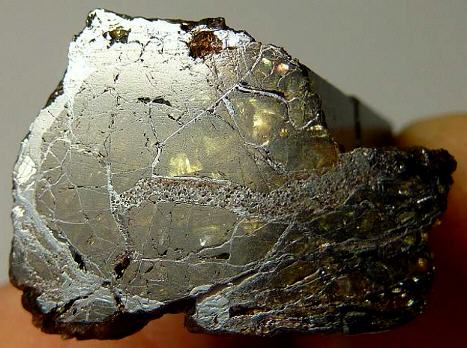 Found August 2004
27° 14′ 25.7′ N., 8° 50′ 49.5′ W. A meteoriteWork in progress. A solid natural object reaching a planet’s surface from interplanetary space. Solid portion of a meteoroid that survives its fall to Earth, or some other body. Meteorites are classified as stony meteorites, iron meteorites, and stony-iron meteorites. These groups are further divided according to their mineralogy and having the appearance of a pallasite and weighing ~2–5 kg was found by a nomad about 30 km southeast of Al Mahbas in Saguia el Hamra, Western Sahara. Along with this mass, a few other complete individuals weighing ~16–68 g were recovered which still exhibit black fusion crustMelted exterior of a meteorite that forms when it passes through Earth’s atmosphere. Friction with the air will raise a meteorite’s surface temperature upwards of  4800 K (8180 °F) and will melt (ablate) the surface minerals and flow backwards over the surface as shown in the Lafayette meteorite photograph below. and fresh metal. Numerous smaller fragments found around the ~10 m findMeteorite not seen to fall, but recovered at some later date. For example, many finds from Antarctica fell 10,000 to 700,000 years ago. area contain only oxidizedOxidation and reduction together are called redox (reduction and oxidation) and generally characterized by the transfer of electrons between chemical species, like molecules, atoms or ions, where one species undergoes oxidation, a loss of electrons,  while another species undergoes reduction, a gain of electrons. This transfer of electrons between reactants metal. It was reported that the nomad who found the large mass had transported it a few miles away before he hid it under a small tree in a wadi, only to later forget the exact location.

In November of 2004, meteorite dealer M. Farmer traveled to the original find location with a metal detectorAny device used to sense the passage of a particle or photon (x-ray, γ-ray, etc.). X-rays can be detected using sealed-gas proportional, gas-flow proportional detectors, and Li-drifted Si semiconductor detectors. A Li-drifted Ge detector is used to count γ-rays in the laboratory. and recovered a number of oxidized fragments and <100 g of fresh material, the latter being utilized for classification at ASU (L. Garvie), UCLA (J. Wasson), and UNM (K. Ziegler). Because this find is located within a mined, prohibited military zone only ~2 km from the Algerian border, a thorough search could not be completed. A preliminary classification of this pallasite under the provisional designation NWA 2683 was completed at Northern Arizona University (T. Bunch and J. Wittke). The meteorite was determined to be shocked to stage S2 and severely weathered to grade W5 (the FeNi-metal matrixFine grained primary and silicate-rich material in chondrites that surrounds chondrules, refractory inclusions (like CAIs), breccia clasts and other constituents. has been transformed into hematiteFe-oxide mineral (Fe2O3) that may be the major cause of the red color on Mars. Coarser-grained gray hematite has the same chemical formula as the red variety, but a different crystalline structure. Deposits of gray hematite found in the Terra Meridiani region of Mars may suggest that water once circulated). The metal composition of La’gad 002 is high in Ir and very low in Ni (J. Wasson), most similar to Marjalahti. It is designated an anomalous pallasite based on a very high proportion of plessiteA fine-grained intergrowth of kamacite and taenite that fills in the wedges between wide kamacite and taenite bands in octahedrites. The name derives from the Greek word for "filling." to kamaciteMore common than taenite, both taenite and kamacite are Ni-Fe alloys found in iron meteorites. Kamacite, α-(Fe,Ni), contains 4-7.5 wt% Ni, and forms large body-centered cubic crystals that appear like broad bands or beam-like structures on the etched surface of a meteorite; its name is derived from the Greek word of 50% (up to 98% plessite in some pairings). La’gad 002 is likely paired with the pallasites NWA 10015, NWA 10023, NWA 10252 and NWA 11720 based on their similar isotopic and geochemical compositions as well as their high content of plessitic metal. The photos above show two lighting angles of an oxidized slice weighing 1.26 g. The photo below shows a 65.3 g fusionProcess in which two lighter atomic nuclei combine to form a heavier atomic nucleus. Very high temperatures are normally required in order for atomic nuclei to collide with sufficient energy to overcome the Coulomb barrier (their mutual electrostatic repulsions). Fusion that occurs under high-temperature conditions is called thermonuclear fusion. Fusion crusted individual in the Dr. J. Piatek Collection. 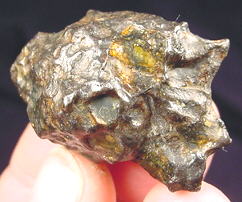