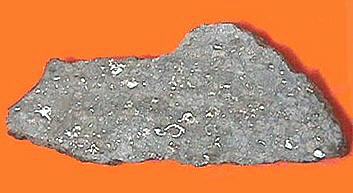 Fell June 9, 1866
48° 54′ N., 22° 24′ E. Following detonations, a shower of stones numbering more than 1000, and weighing ~500 kg, fell at 5:00 P.M. in the Ukraine, USSR. A strewnfield with dimensions of 2 × 0.75 miles was delineated. The nearly spherical mass of Knyahinya had an estimated pre-atmospheric diameter of 90 cm, corresponding to a mass of ~1,300–1,400 kg, before it was broken into two nearly symmetrical sections upon impact; the largest section weighed 293 kg. The CRE age of Knyahinya as inferred from cosmic-ray track data and cosmogenic Ne ratios is 38 m.y. Knyahinya has proven to be instrumental in studies of cosmogenic nuclideA nuclear species characterized by Z protons and N neutrons. production systematics due to its simple single-stage exposure history and its simple shielding geometry, allowing exact depth profiles to be determined.

Although Knyahinya has an accepted classification of L5 based on its trace elementSubstance composed of atoms, each of which has the same atomic number (Z) and chemical properties. The chemical properties of an element are determined by the arrangement of the electrons in the various shells (specified by their quantum number) that surround the nucleus. In a neutral atom, the number of composition, it is partially resolved into an intermediate L/LL chondriteChondrites are the most common meteorites accounting for ~84% of falls. Chondrites are comprised mostly of Fe- and Mg-bearing silicate minerals (found in both chondrules and fine grained matrix), reduced Fe/Ni metal (found in various states like large blebs, small grains and/or even chondrule rims), and various refractory inclusions (such group based on studies involving the Co abundance in matrixFine grained primary and silicate-rich material in chondrites that surrounds chondrules, refractory inclusions (like CAIs), breccia clasts and other constituents. kamaciteMore common than taenite, both taenite and kamacite are Ni-Fe alloys found in iron meteorites. Kamacite, α-(Fe,Ni), contains 4-7.5 wt% Ni, and forms large body-centered cubic crystals that appear like broad bands or beam-like structures on the etched surface of a meteorite; its name is derived from the Greek word and on its bulk metallic iron content similar to that of an LL chondriteOrdinary chondrites ("low Fe" / "low metal") with only 1 to 3% free metal. Their olivine is more Fe-rich than in the other ordinary chondrites (Fa27-32), implying that the LL types must have formed under more oxidizing conditions than their H or L cousins. Orthopyroxene compositions are also Fe-the rich. Contrariwise, the Ir/Au atomic ratio of Knyahinya falls within the H range (3.4–3.8) rather than the LL–L range (2.6–3.5). It was demonstrated by Szurgot (2016) that the mean atomic weightMass of a neutral atom of a nuclide - also called "atomic weight." The atomic weight of an element is the weighted average of each isotope. (Amean) of meteorites can be used to resolve the OC groups, including the intermediate groups L/LL and H/L. Amean values can also be predicted through various equations based on other parameters such as atomic Fe/Si ratio, grain densityMass of an object divided by its volume. Density is a characteristic property of a substance (rock vs. ice, e.g.). Some substances (like gases) are easily compressible and have different densities depending on how much pressure is exerted upon them. The Sun is composed of compressible gases and is much, and magnetic susceptibility, and these Amean values all consistently resolve these groups into the ordered sequence LL < L/LL < L < H/L < H. Knyahinya has Amean values of 23.24 (chemical composition), 23.21 (Fe/Si atomic ratio), and 23.54 (grain density). Furthermore, it was demonstrated that Amean values are lower for unequilibrated type 3 samples than for equilibrated samples within each OC group due to the presence of water; Amean values for petrologic types 4–6 are indistinguishable within each group.

Diagram credit: M. Szurgot, 47th LPSC, #2180 (2016)
Amean based on chemical composition (Eq. 1), Fe/Si atomic ratio (Eq. 2), and grain density (Eq. 3) Members of the L/LL chondrite group include L/LL3 Esperance, L/LL4 Seemore Downs, Bjurböle, and Cynthiana, L/LL5/6 Sahara 97021, and L/LL6 Acfer 041, as well as the partially resolved L/LL3 Inman and L/LL6 Holbrook. In a study of the shock stageA petrographic assessment, using features observed in minerals grains, of the degree to which a meteorite has undergone shock metamorphism. The highest stage observed in 25% of the indicator grains is used to determine the stage. Also called "shock level".               of Knyahinya conducted by Fürj et al. (2009), mosaicism in olivines and twinning in pyroxenes were detected consistent with a shock stage of S4. The specimen of Knyahinya shown above is a 1.93 g partial slice. The photo below shows a print depicting the Knyahinya fireball—from a book published in Denmark a few years after the fallMeteorite seen to fall. Such meteorites are usually collected soon after falling and are not affected by terrestrial weathering (Weathering = 0). Beginning in 2014 (date needs confirmation), the NomComm adopted the use of the terms "probable fall" and "confirmed fall" to provide better insight into the meteorite's history. If (click image for title page). [A description posted online: ‘Mr. Kolbay’s drawings of what he and Mr. Rainer saw from near Eperies (today Pre šov, Slovakia), ~92 km from the Knyahinya strewnfield, as presented by W. R. v. Haidinger in 1866.’] 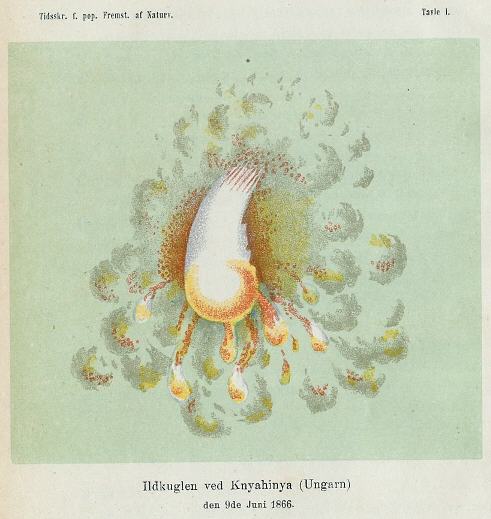 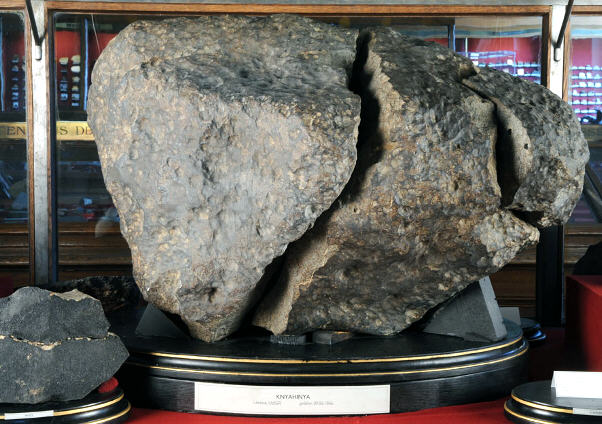 The largest mass of Knyahinya weighs 293 kg, which is curated at the Natural History Museum, Vienna.