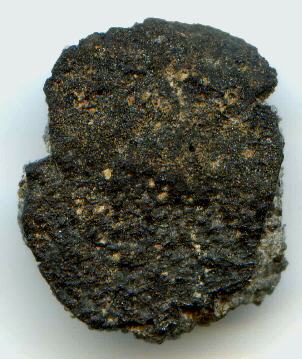 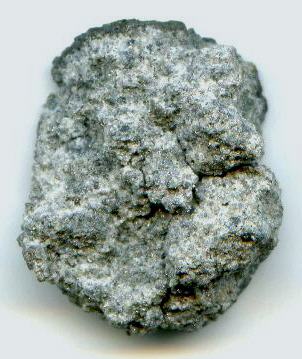 Fell June 4, 1890
12° 23′ N., 78° 31′ E. After sonic booms were heard, two stones were recovered in Tamilnadu, Salem, Kakangari, India. One stone was broken into pieces while the other, weighing 347 g, was preserved. Most of this meteoriteWork in progress. A solid natural object reaching a planet’s surface from interplanetary space. Solid portion of a meteoroid that survives its fall to Earth, or some other body. Meteorites are classified as stony meteorites, iron meteorites, and stony-iron meteorites. These groups are further divided according to their mineralogy and is accounted for in only four institutions, with the above specimen being obtained through the Natural History Museum in London by an American meteorite dealer.

Kakangari consists of about half chondrules and half chondrule fragments, mostly type-I, FeO-poor just as are EH3 chondrules, and they are FeNi–FeS-rich. In addition, AOAs and refractory material in the form of irregularly shaped CAIs are present. The relative proportion of chondrule textural-types, predominantly porphyritic and non-porphyritic, is unlike that in other chondrite groups; however, the abundance of POP chondrules is most similar to that of ordinary chondrites. Some porphyritic chondrules contain large metal–sulfide intergrowths having ragged outlines, while others contain small metal–sulfide beads within olivines and groundmass. Most chondrules and fragments also have metal–sulfide rims, but some have fine-grained, igneous-textured silicateThe most abundant group of minerals in Earth's crust, the structure of silicates are dominated by the silica tetrahedron, SiO44-, with metal ions occurring between tetrahedra). The mesodesmic bonds of the silicon tetrahedron allow extensive polymerization and silicates are classified according to the amount of linking that occurs between the rims. The abundance of silicate rims in Kakangari is intermediate to that found in the CV and ordinary chondrites. Layered rims are found on some chondrules, implying that they have experienced at least three melting events with two accretionary episodes. Spongy troilite usually forms the final layer on chondrules and fragments. 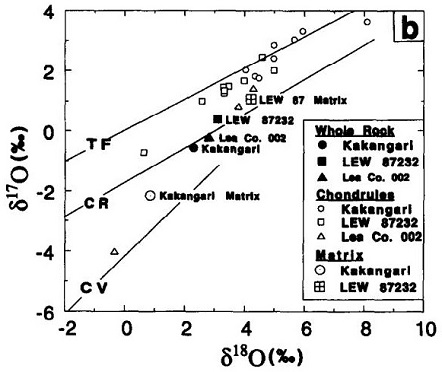 Diagram credit: Weisberg et al., GCA, vol. 60, p. 9 (1996)
‘The K (Kakangari) chondrite grouplet’
(https://doi.org/10.1016/S0016-7037(96)00233-5) A NanoSIMS study of Kakangari conducted by Floss and Stadermann (2009, 2012) revealed a single C-anomalous grain (13C-rich), probably SiC from AGB starsStars on the Asymptotic Giant Branch, which represents a late stage of stellar evolution that all stars with initial masses < 8 Msun go through. At this late stage of stellar evolution, gas and dust are lifted off the stellar surface by massive winds that transfer material to the interstellar, corresponding to an abundance of ~4 ppmParts per million (106).. Kakangari also contains relatively low abundances of presolar silicate/oxide grains (< ~5 ppm). Furthermore, there is a complete lack of both O-anomalous presolar grains and amorphous silicates in the matrix. These findings attest to the fact that Kakangari experienced secondary processing, probably on the parent body, and thus cannot be considered a primitive meteorite. The fusion crustMelted exterior of a meteorite that forms when it passes through Earth’s atmosphere. Friction with the air will raise a meteorite’s surface temperature upwards of  4800 K (8180 °F) and will melt (ablate) the surface minerals and flow backwards over the surface as shown in the Lafayette meteorite photograph below. of Kakangari is described as dull and dark brown, exhibiting a close textured, locally ribbed and netted texture (S. Ghosh and A. Dube, 1999). The photos above show a 1.15 g surface fragment of Kakangari dispalying both the fusion-crusted side and the interior. 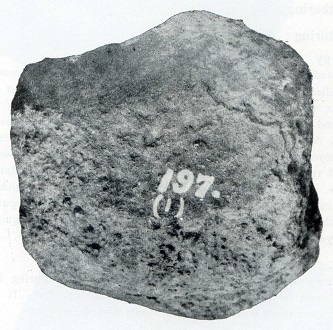