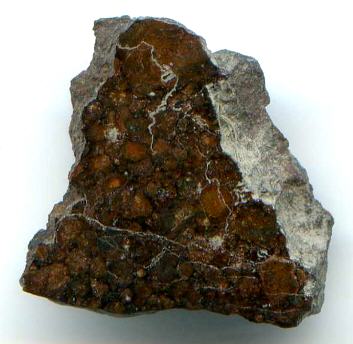 To discriminate among subtypes below type 3.2, it has been shown that the Cr content of ferroan olivineGroup of silicate minerals, (Mg,Fe)2SiO4, with the compositional endpoints of forsterite (Mg2SiO4) and fayalite (Fe2SiO4). Olivine is commonly found in all chondrites within both the matrix and chondrules, achondrites including most primitive achondrites and some evolved achondrites, in pallasites as large yellow-green crystals (brown when terrestrialized), in the silicate portion is an excellent indicator of metamorphism (J. Grossman, 2004; Grossman and Brearley 2005). ChromiteBrownish-black oxide of chromium and iron (Cr-Fe oxide), Cr2FeO4, found in many meteorite groups. exsolves from olivine in the incipient stages of metamorphism, initially producing heterogeneous Cr contents, and eventually homogeneously low Cr content of olivine. In a study by Chizmadia and Bendersky (2006), they determined that this sequence progresses from type 3.0, corresponding to high Cr2O3 contents of 0.3–0.4 wt%, to type 3.2, in which Cr2O3 constitutes less than 0.1 wt%. The gap between these two subtypes represents type 3.1. Analyses of the L chondriteOrdinary chondrites low in free Ni-Fe metal (4 to 10 vol. %), containing olivine (Fa22-26) and the orthopyroxene hypersthene (Fs19-22). Average chondrule diameters (0.7 mm) are larger than those in H chondrites. The asteroid 433 Eros is suspected as a parent body, based on reflectance spectra, but most L chondrites NWA 7731 have established that it has a relatively high Cr2O3 content of 0.43 (±0.11) wt% as well as other features (e.g., igneous zoning of Cr in olivine, sulfur-rich opaques) consistent with a classification of 3.00 (Agee et al, 2013). Thin sectionThin slice or rock, usually 30 µm thick. Thin sections are used to study rocks with a petrographic microscope. studies have resolved an abundance of large, highly fractured chondrulesRoughly spherical aggregate of coarse crystals formed from the rapid cooling and solidification of a melt at  ~1400 ° C. Large numbers of chondrules are found in all chondrites except for the CI group of carbonaceous chondrites. Chondrules are typically 0.5-2 mm in diameter and are usually composed of olivine of types RP, PO, and BO. This meteoriteWork in progress. A solid natural object reaching a planet’s surface from interplanetary space. Solid portion of a meteoroid that survives its fall to Earth, or some other body. Meteorites are classified as stony meteorites, iron meteorites, and stony-iron meteorites. These groups are further divided according to their mineralogy and has a shock stageA petrographic assessment, using features observed in minerals grains, of the degree to which a meteorite has undergone shock metamorphism. The highest stage observed in 25% of the indicator grains is used to determine the stage. Also called "shock level".               of S3 and is highly weathered to a grade of W3. The specimen of JaH 026 pictured above is a 0.58 g partial end section. In the top photo below are several fragments from this findMeteorite not seen to fall, but recovered at some later date. For example, many finds from Antarctica fell 10,000 to 700,000 years ago., while the bottom image is an excellent petrographic thin section micrograph of JaH 026, shown courtesy of Peter Marmet. 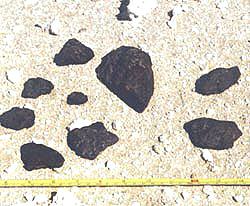 Photo courtesy of CometConglomeration of frozen water and gases (methane, ammonia, CO2) and silicates that that formed in the outer solar system and orbits the Sun. In recent years, the description of comets has shifted from dirty snowballs to snowy dirtballs with more dust than ice. However, the ratio is less than 10-to-1. Meteorite Shop 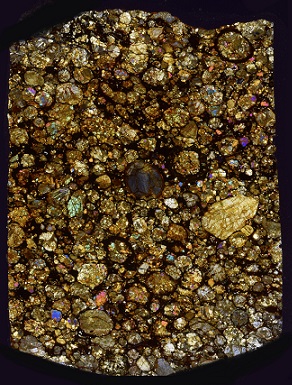