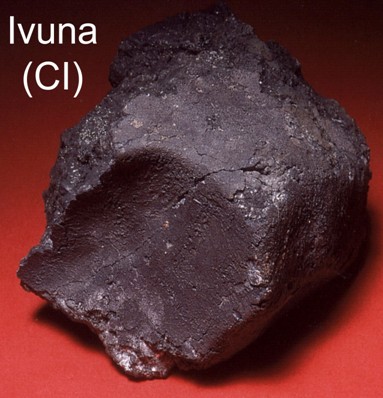 Carbonaceous chondriteCarbonaceous chondrites represent the most primitive rock samples of our solar system. This rare (less than 5% of all meteorite falls) class of meteorites are a time capsule from the earliest days in the formation of our solar system. They are divided into the following compositional groups that, other than weighing 0.7 kg that landed near Ivuna, Tanzania, on Dec. 16, 1938. The Ivuna meteoriteWork in progress. A solid natural object reaching a planet’s surface from interplanetary space. Solid portion of a meteoroid that survives its fall to Earth, or some other body. Meteorites are classified as stony meteorites, iron meteorites, and stony-iron meteorites. These groups are further divided according to their mineralogy and is the eponym for the CI (Carbonaceous Ivuna-like) chondritesChondrites are the most common meteorites accounting for ~84% of falls. Chondrites are comprised mostly of Fe- and Mg-bearing silicate minerals (found in both chondrules and fine grained matrix), reduced Fe/Ni metal (found in various states like large blebs, small grains and/or even chondrule rims), and various refractory inclusions (such.

In 2001, a team from the Scripps Institution of Oceanography, the Leideon Observatory in the Netherlands, and the NASA Ames Research Center, demonstrated the presence of two simple amino acids, glycine and β-alanine, and linked Ivuna with a likely origin in the nucleusCore of an atom, where nearly the entire mass and all positive charge is concentrated. It consists of protons and neutrons. of a cometConglomeration of frozen water and gases (methane, ammonia, CO2) and silicates that that formed in the outer solar system and orbits the Sun. In recent years, the description of comets has shifted from dirty snowballs to snowy dirtballs with more dust than ice. However, the ratio is less than 10-to-1..